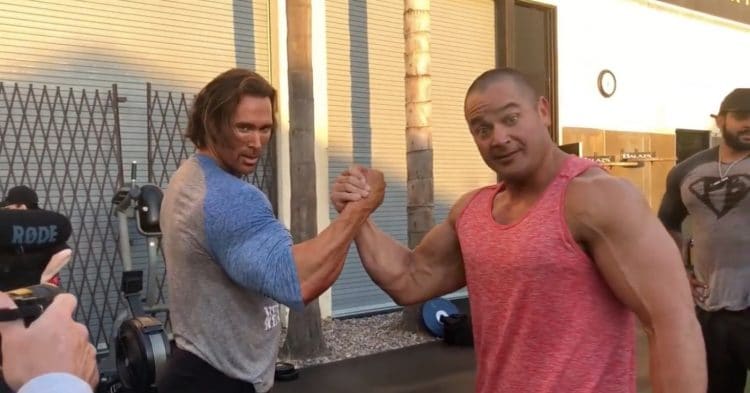 When two of the best minds in bodybuilding, Mike O’Hearn and Mark Bell come together, fans know they are in for a treat. This time around, the two legends shared their tips for getting better results from your bench sessions, leading to a sliced up chest.

Even at 52 years old, O’Hearn still has one of the best physiques in the world. The Mr. Natural Universe winner built his career on having a god-like body built from hard work, and this has still carried over into his later years of life.

Compare this to Bell, who 44 years old and still actively competing. Doing everything from powerlifting to strongman, he has embodied success from the very beginning of his career, leaving an inspiring legacy in his path.

Currently, Mark Bell is preparing to compete in a bodybuilding show, and to do that he has been working with none other than Mike O’Hearn. They recently had a training session together that Mike uploaded to YouTube, which took a dive into their chest training sessions.

However what started out as just a typical training session quickly turned into more of a learning experience, as both men shared their knowledge with each other, talking about best practices.

When the session began with the bench press, it was immediately clear that O’Hearn and Bell have different views on training. While Mark focuses on lower weights and high reps, Mike is more interested in doing one single rep, at a higher weight.

That said, Mark brought up an interesting point on how he approaches this type of weight training. He says that using his powerlifting experience has opened his eyes to a different way of doing the work.

“I would use bodybuilding tricks sometimes in powerlifting, to pre-fatigue myself on purpose, so I use less weight. So I’m less likely to get hurt,” Bell said.

After doing some incline bench sets, the moved on to some other chest exercises. The first of these was the incline dumbbell press, where O’Hearn broke down the isolation that Mark is doing, and how he is going to the point of fatigue.

When it came to the vertical press, Mike explained how using the different grips allows you to put focus on specific areas of the pec. By going under you work the middle of the pec, then going over works the outside of the pec.

“Man, I tell you. When you start processing workouts to this level, you make gains no matter what age,” O’Hearn said.

To conclude the main part of the training session, Mark and Mike do some dips. Afterwards they marvel at the striations and pump that this workout gives him, making them look super shredded. Then to close out the day, the pair, along with their crew, engage in a push-up contest that leaves the pair tied until someone forces Mike down as a joke.

Mike O’Hearn says that he will be working with Mark Bell all the way until his contest, dieting with him the whole time. It is cool to see these two legends doing this work together, and it will be interesting to see the end results.