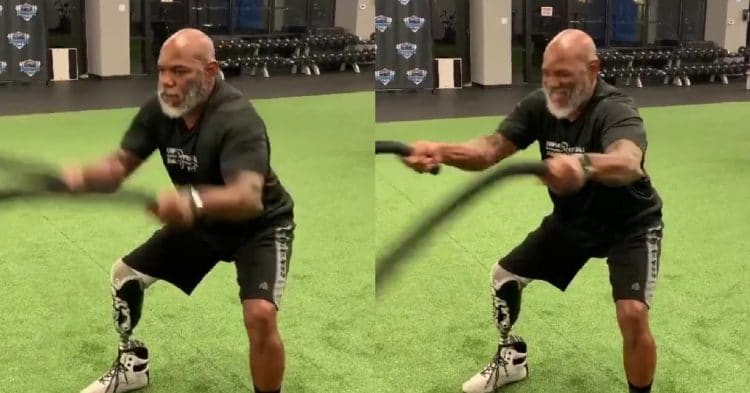 Just because Flex Wheeler has been going through some hard times lately, does not mean he is not still capable of doing some crazy workouts. He showed this again recently, with a killer cardio session in the gym.

In the months since he lost the lower part of his right leg, Wheeler has been going through a roller coaster of emotions. Where there are times that he seems ultra positive, other moments see him being open and honest about the struggles he is facing, both with his mental and physical health. Even recently, he was back in the hospital dealing with some severe phantom pains in his leg, a moment that had him feeling down, which he openly expressed.

However if there is one thing we know, it is that Flex Wheeler is not the type of man to give up or be deterred. Proof of that was seen recently, when the bodybuilding legend posted to his Instagram with a killer cardio session. He shared a video of him crushing the ropes, while sharing his own personal routine that is so intense, it makes him keep a puke bucket in close quarters.

Alternating arms up and down.

Both arms up and down engage your core

15 sec In between each round

PS
Make sure you have a puke bucket 🤮 nearby”

It is crazy to see the progress that Flex has made, from taking his first steps since the procedure, to his initial return to the gym, and now this. He is constantly working to get better, even though it is clearly a struggle for him to persevere. Whether it is him killing this intense rope session, or pushing past the pain to do some leg presses, he is a nonstop source of inspiration to those facing similar situations.

“Not sure Y I keep Torturing myself SMH ❗❗❗ just walking generate so much pain. Then I come into the gym and do leg extensions and leg press completely raming my residual limb into the bottom of my prosthetic socket 🥺. Just immensely mind-boggling, why would I do such a thing 🤷🏾‍♂️? But if I’m ever to get back to a normal lifestyle I have to keep pushing the envelope, all I can do is pray one day that the pain will subside and I can go on ✊🏾”

The road has been anything but easy for Flex Wheeler, but he continues to show determination and perseverance in ways that does nothing but inspire others to do the same. Hopefully he can continue to get better, and soon enough things will begin to get easier for him.