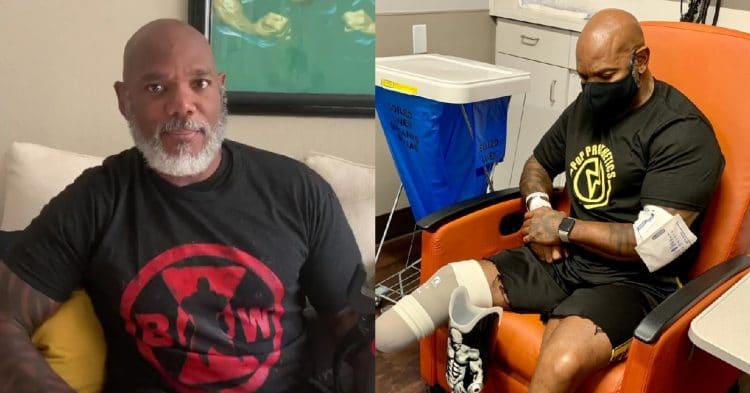 It has been almost a year since bodybuilding legend Flex Wheeler lost part of his right leg. However he is unfortunately still struggling with some things, leading him to being back in the hospital.

Last October, reports emerged that Wheeler was in the hospital, in need of emergency surgery. This was later to be explained as the bodybuilding legend’s long-term health issues led to the lower part of his right leg being amputated. The following months were unbelievably difficult for him, both physically and mentally, but he was finally able to make a return to the gym, and it seemed like he was beginning to return to his love as an athlete.

Unfortunately it seems that Flex Wheeler has been struggling with some lingering problems. A recent post to his Instagram saw him back in the hospital. Although he does not explain exactly what is going on, he suggests that he is having trouble dealing with phantom leg pains.

“Well I fought as long and hard as I could not to come back here. But the last few days has been more then I could handle 😢😢 #pain #neuropathy #phantompain #dvt #torture #unbearablepain😭 #broken #hopeless #amputeelife 💔”

It is extremely troubling that Wheeler is struggling like this. Phantom pain is a common phenomenon in amputees, where the brain feels very real pain, that seemingly comes from the limb that is no longer there. Unfortunately it seems that this is being too much for him, leaving him no choice but to go back to the hospital. This news got the attention of bodybuilding great Ronnie Coleman, who offered some support for his comrade in the comments.

“It’s all about the fight my brother, I need another surgery and I’m fighting with everything I got not to do this, these herniations ain’t no joke.” 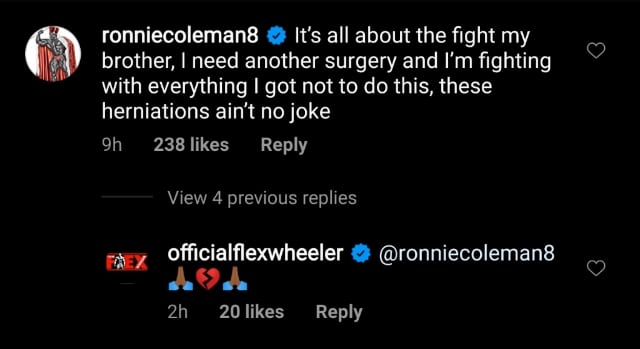 In the post, Wheeler seems to be feeling really down right now, and understably so. However in times like this, it is important to remember how far he has come. Obviously things are difficult, and it is hard to understand what he is going through of you have not been there yourself, but he has been able to stay positive at other points in this process.

It is unclear what Flex Wheeler will be going through at the hospital, in order to help get past this difficult time. FitnessVolt is sending him positive thoughts, and well wishes. Hopefully he will continue to demonstrate the unstoppable mental fortitude that has made him a fan favorite and tale of inspiration.