Francis Ngannou gives a meaningful insight on his relationship with food 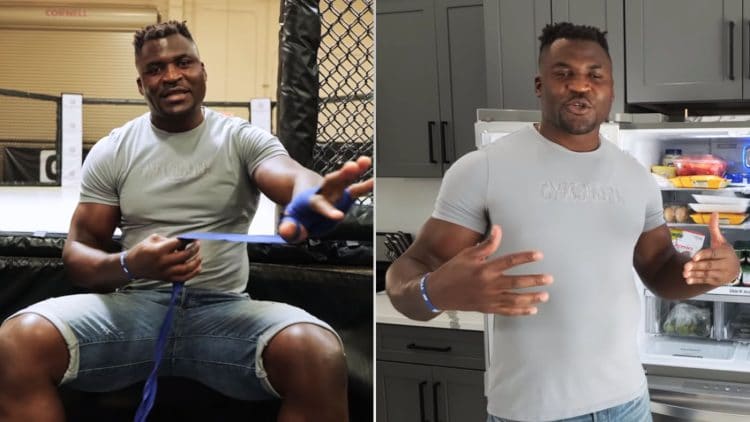 UFC Heavyweight champion Francis Ngannou is arguably the hardest hitter that the sport of Mixed Martial Arts has ever seen. The proud Cameroonian became the third African-born UFC champion with a second-round knockout win over Stipe Miocic at UFC 260 in March 2021. The Predator’s mind-boggling life trajectory and eventual rise to fame have created a lot of intrigue around his persona. In a recent video interview with Men’s Health, Francis Ngannou showed around his house and gave some meaningful insights on his relationship with food.

Born and raised in the West-Central African country of Cameroon in extreme poverty, Francis Ngannou spent most of his early life working odd jobs to make the ends meet. He migrated to Europe in 2013 after a perilous journey. While living homeless in Paris, Ngannou was introduced to Coach Fernand Lopez of The MMA Factory. The Cameroonian left his home country to become a boxer. However, Coach Lopez saw the potential and trained Ngannou in all aspects of Mixed Martial Arts. The Predator eventually made a transition to the UFC and now lives in Las Vegas where he trains at The UFC Performance Institute and Xtreme Couture.

Francis Ngannou’s deep-rooted respect for humble beginnings is evident in his simple lifestyle. Ngannou prefers to start his day with Granola before heading to the gym. So his fridge always contains a jar of almond milk to go with it.

MMA is a demanding sport. Showing up in peak physical condition on the fight night requires arduous diets that are sometimes extremely restrictive due to factors like weight cutting etc. Francis Ngannou is one of the few fighters that probably cut weight to stay within the heavyweight limit of 265lbs.

When in a training camp, he controls portions and relies on his chef to prepare meals for him. However, when not preparing for fights, the 35-year-old does not like to be very restrictive about portions or types of food. He loves to enjoy pancakes.

You can’t be in America and resist burgers for a long time. Francis Ngannou still does not eat burgers too much. However, when he does, the triple stack is his go-to option.

“It’s not the biggest, but the least small one.” Francis Ngannou said.

Francis Ngannou is a physical specimen with a high muscle mass and sufficient Protein intake goes without saying. He prefers free-range chicken over the caged variety and also likes to eat Salmon and beef depending on his prescribed diet.

Athletes’ diets put a lot of foods off the limits to ensure performance longevity – especially of the snacking variety. That being the case, dried fruits make up for a good source of healthy fats and energy. Francis Ngannou lists almonds, cashews, and pistachios as a part of his snacking strategy.

Las Vegas is in the heart of the Mojave Desert and therefore has a subtropical hot desert climate. It makes frequent water consumption a high priority – especially for training athletes. Apart from consuming an ample amount of water, Francis Ngannou keeps a stock of fruits –mainly watermelons, grapefruits, and cherries to keep him hydrated.

While many athletes can store desserts at home and resist the urge to devour them until the right moment, Francis Ngannou admits he is not one of them. The champ likes to enjoy ice creams for cheat meals. However, he refrains from keeping one in his fridge to avoid the temptation and eventually, guilt!

“It’s very tempting and I’m gonna feel bad about myself after eating but I’ll still eat it. So, I rather don’t have it in my fridge.” Francis Ngannou stated.

When asked about the foods he does not like, Francis Ngannou stated that he has a respectful relationship with food. Having grown up in extreme poverty, the Cameroonian appreciates every type of food and does not dislike anything.

“Problem is, I grew up having a lot of respect for food seeing we didn’t have food. So I kinda like, appreciate every type of food. I don’t waste food at all. I used to just eat to not be starving, not just to like it.” Francis Ngannou said.

The gym and training set-up

Francis Ngannou trains at the state-of-the-art facilities in the UFC Performance Institute and Xtreme Couture in Las Vegas. Proximity to these facilities eliminates the need for an elaborate setup at home.

The Predator starts the gym tour from the MMA fighting cage at Xtreme Couture that is labeled as the ‘Human Resource’ department of the gym! Francis Ngannou jokes about that being the cage being the place to resolve disputes with training partners and friends just the way an HR department resolves the issues between employees in a corporate set-up!

“At the gym, if you have a problem with your friend or whoever, this is a human resource. You both come here, you solve the problem. They lock this up. You guys settle your problem and when you come out here, I think everything is good.” Francis Ngannou told.

That comes across as a bit of a confusing idea because it’s hard to imagine who in the world – apart from Jon Jones, Ciryl Gane, and Stipe Miocic – would want to settle their differences with Francis Ngannou inside a locked cage!

Francis Ngannou’s training routine varies as per his fighting schedule. The 35-year-old fighter works out every day. However, the number of workouts per day differs according to the stage of his training camp. His idea of an intense workout varies for specific aspects of the fight game. It incorporates a plethora of activities like a sparring and grappling session as well as strength and conditioning exercises.

Francis Ngannou regularly uploads his home workout videos on his Instagram account. When at home, he prefers to work out in the backyard or the garage of his house and usually trains bodyweight and cardio exercises without any equipment.

When asked about his favorite workout music, The Cameroonian fighter revealed that he mostly listens to Cameroonian and French music that people in other parts of the world might not be familiar with. Apart from that, Francis Ngannou stated that he frequently works out with Drake and loves ‘God’s Plan’ and ‘Coming from the bottom’ very much.

‘Your motivation, it evolves’ – Francis Ngannou

Francis Ngannou firmly believes that motivation is subjective to the circumstances that surround you at different stages of your career. One of the first three African-born UFC champions, Ngannou represents an entire continent. He cites their hopes and support as the source of his motivation.

“At some point you might say, ‘oh, I was fighting because I was hungry, I need money. I was fighting because I was so passionate about fight.’ But over time, when you get higher and higher, your motivation, it evolves. Today, my whole country stand up. People from all around the world stand up to watch me, to support me. So I have to do my best to give them the best outcome of their support.” Francis Ngannou said.

Francis Ngannou will most likely attempt the first defense of his title against his former teammate and Interim UFC heavyweight champion Ciryl Gane. Given the back story between the two, Francis Ngannou will need every bit of motivation and support from his fans to get the job done against the ever-elusive Bon Gamin and walk away with the title.