7x Mr. Olympia Phil Heath joined the PBD podcast to discuss the upcoming 2021 Olympia including his thoughts on Hadi Choopan and Nick Walker. 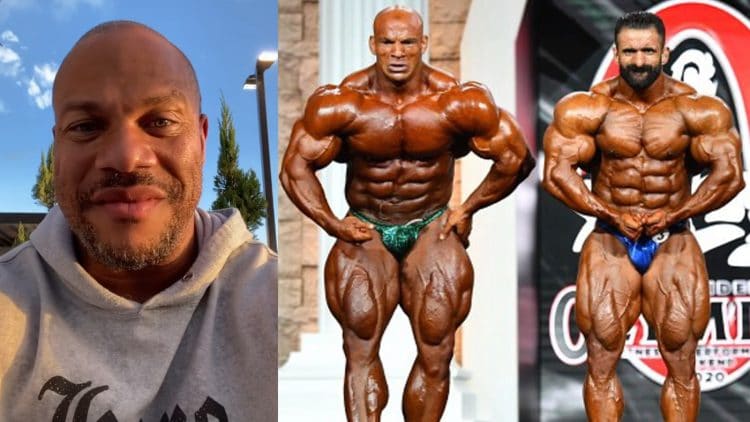 Earlier today, seven-time Mr. Olympia (2011-2017) champion Phil Heath joined the legendary Patrick Bet-David and other guests for a podcast session to discuss a range of interesting topics. It only made sense that they talked about the highly-anticipated upcoming Olympia taking place October 7-10, in Orlando, Florida.

For those who aren’t as familiar with Men’s Bodybuilding, the Olympia is the biggest bodybuilding and Fitness event in the world. Phil Heath held the title for seven straight years before losing it in 2018. So he decided to take 2019 off and returned to the Olympia in 2020 but placed a disappointing third.

While he won’t compete this year, “The Gift” does have the insight and expertise to be able to make an educated prediction on who could win the show this year.

During the show, Phil mentioned Big Ramy (Mamdouh Elssbiay), of course, who’s the current Mr. Olympia. The Egyptian bodybuilder was the runner-up to Phil at the 2017 Olympia. He placed 6th the next year, didn’t compete in 2019, and then came back in 2020 to win the title, beating both the defending champion Brandon Curry (runner-up) and Phil Heath (third).

“More than likely he is the favorite, he is the guy who is going to repeat,” said Heath.

But there’s one guy who’s been included a whole lot in the discussion of who could be a threat to the Sandow and that’s “The Persian Wolf” Hadi Choopan of Iran.

Choopan was a 212 competitor prior to winning the 2019 Vancouver Pro Men’s Bodybuilding and qualifying for the 2019 Olympia in the Men’s Open division. He surprised a lot of people after placing third in his first show and many thought he could have even been the runner-up. Then last year he placed 4th behind Phil Heath.

But since making the switch to Men’s Bodybuilding, he’s been considered someone who absolutely can win the Mr. O. Not to mention, he’s also trained by Hany Rambod who’s also Phil Heath’s coach.

Pat asked Phil what the chances are that Hadi beats Ramy this year.

His response… “I think it’s all about who peaks not just on Friday but who slams the door on Saturday.”

Heath brought up the fact that Ramy has only peaked a few times in his career which was a bit frustrating for both him and fans. Being one of the biggest competitors on stage, it’s also likely affected his ability to get his conditioning just perfect.

“The timing is everything.”

Then, of course, Brandon Curry isn’t going down without a fight. Losing his title to Ramy last year, he certainly has the package to take it back but only if he shows up better than he ever has in his career.

So Phil has Ramy, Hadi, and Brandon as his top three.

Related: Brandon Curry Shares Plans To ‘Bring Something New’ To The 2021 Mr. Olympia

Phil mentioned William Bonac, who is always a very strong contender (2x Arnold Classic champ and 2019 Olympia runner-up), and also the phenom Nick Walker who just won the 2021 Arnold Classic two weeks ago. While he doesn’t think the 27-year-old could win the Olympia this year, a top-three is possible if the others are off, he explained.

Pat was curious to know how big of a deal it is to win the Arnold going into the Olympia.

“I think this year it helps him tremendously because of the fact that the Arnold was two weeks prior to the Olympia,” Phil said.

The Arnold typically goes down in March while the Olympia usually takes place in September. But, of course, there’ve been a lot of recent changes due to the Covid situation.

But then again, the Arnold is a one-day show while the Olympia is judged over two days which is going to be more challenging. Not to mention, there are many variables that change regarding a competitors body from show to show.

So again, peaking is imperative but very difficult, as a result.

2021 Mr. Olympia List of Qualified Athletes in Every Division

For his top four Mr. Olympia picks, Heath has either Ramy, or Hadi, then Brandon, and William Bonac in that order. Pat asked about Nick being number four but Phil thinks it’ll be Bonac in that spot seeing as he did not compete at the Arnold Classic which allows him to focus more on peaking for the Olympia.

Phil says if Hadi wins he may have to drive to Orlando to congratulate him personally.

They pulled up a picture of Hadi Choopan and Big Ramy side by side for comparison and while Ramy is much larger, the 7x Mr. Olympia and businessman pointed out the deeper cuts and separation from The Persian Wolf.

You can watch the entire segment on the topic below where they go into a little more detail.

Who Do You Got?

This year’s Olympia is going to be an exciting one with the best competitors stepping on stage to battle it out for the biggest trophy in bodybuilding.

Big Ramy will be defending his title but Hadi Choopan, Brandon Curry, and the other top guys are tough competition. We’ll see if Phil Heath’s predictions are spot on but with what we know, they can’t be too far off but we’ve been shocked before.

You can find out how to watch the 2021 Olympia here.

Reigning two-time Mr. Olympia champion Mamdouh ‘Big Ramy’ Elssbiay has greenlit the next stage of his preparations for this year's...

There are less than 14 weeks until 2022 Mr. Olympia and reigning champion Mamdouh ‘Big Ramy’ Elssbiay's training intensity is...