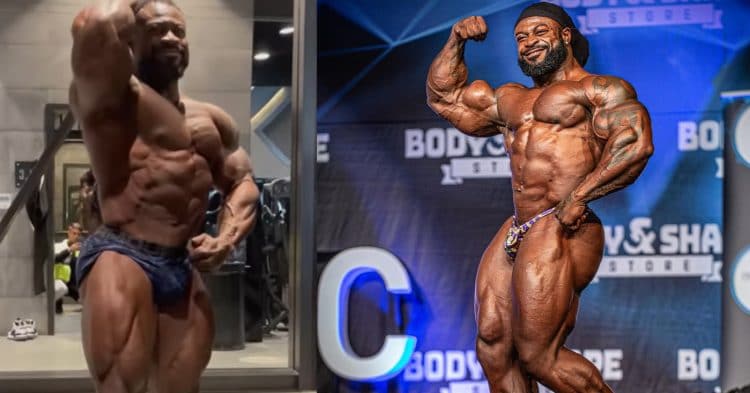 William Bonac has added to Mr. Olympia 2021 excitement by confirming his participation. He announced his arrival in the U.S. through an Instagram post. The big event returns October 7-10th on Pay-Per-View (PPV) in Orlando, Florida.

“We finally made it to the USA for the @mrolympiallc 2021,” announced Bonac through his Instagram.

The second statement is something we do not often see from the otherwise humble Dutch.

“I just want 2 take this opportunity 2 apologize 2 all of you 🤡that I am competing at @mrolympiallc.”

We are assuming the use of the joker emoji could be symbolic of his 2021 Mr. Olympia wild card entry. Bodybuilding fans are looking forward to the package William Bonac brings to Mr. O. stage.

The past year has been relatively uneventful for the 2X Arnold Classic champ. He was not in action except a recent guest posing where The Conqueror wore a joker mask.

But why this excitement around William Bonac Competing at Mr. Olympia 2021?

For people who have not been following the bodybuilding scene, let us help you get up to speed.

COVID-19 disrupted many things around the world. William Bonac’s dream of becoming a 3X Arnold Classic champion was one of them.

On September 24, 2021, Bonac announced that he would not be competing at Arnold Classic USA 2021. This was big news since Bonac had won the Arnold Classic in 2018 and 2020. He had finished second (behind Brandon Curry, who also won the Sandow the same year) in 2019.

“I am sad to announce that I will not be on the stage of Arnold Classic in Ohio this year due to administrative issues regarding my travels during pandemic. I have to thank the organizers for doing all that they can so we solve this issue together but it seems I will not be able to enter the US before the show.”

In his latest Instagram post, Bonac shed more light on what caused him to miss the Arnold Classic 2021.

“..there were some misunderstanding with my Esta [Electronic System for Travel Authorization] due the denial of the Waver proclamation to get me on time for the AC [Arnold Classic]. My Esta got invalid because of this and was not returnable. So my only option was to get an visa in time, which we did. “

Due to an invalid ESTA, Bonac had to get a U.S. visa to compete at the 2021 Mr. Olympia. The silver lining to this episode is that Bonac got his U.S. visa and does not have to reply on ESTA anymore to compete in the U.S.

“Now I got a visa, which is even better so I don’t have to worry for the next 10 years. Secondly I want to give a huge shout out to every one who showed me love and wished me well for missing the Arnold’s
That was really touching, did not realize I had so many supportive fan base. I will make it up, by giving you the best of me & nothing less.
To those who were making fun out of my misery I just want to say; Thank you as well.”

With visa issues out of the way, The Conqueror has his eyes set on defeating Big Ramy to lift the Sandow at the 2021 Mr. Olympia showdown. And this is not something Bonac has not done before. He beat Big Ramy at Arnold Classic 2020 mere months before the Egyptian’s perfect score to win the 2020 Olympia.

“My goal is, of course to beat Ramy. He’s now the man, he’s the champ. He’s the one to beat, he’s the one that everyone’s trying to go after now. He’s the standout,” Bonac said.

William “The Conqueror” Bonac has been competing in Mr. Olympia contests since 2014. Mr. O. 2021 will be Bonac’s eighth showdown. His highest placing came in 2019 when he placed second behind Brandon Curry. William placed fifth in 2020, which marked his fifth straight year in the top five of bodybuilding’s biggest show.

With a track record like his, we cannot wait to see how William Bonac performs at 2021 Mr. Olympia.

For people traveling to Orlando, FL for Mr. Olympia 2021 or the folks who will be tuning in to the PPV this weekend, William Bonac’s participation will help us get a better bang for our buck.

We will be hooked to our screens throughout the Olympia weekend.