After his disappointing withdrawal from the 2020 World's Strongest Man, Gabriel Peña was back in action with another impressive showing 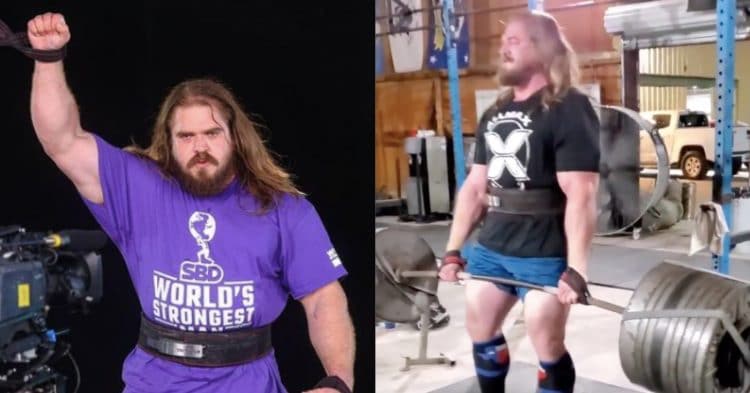 Things were looking rough last month, for strongman competitor Gabriel Peña. However he continues to bounce back with some impressive gym performances, most recently hitting a solid personal record in the training room.

When he was looking to compete at the 2020 World’s Strongest Man, Peña was one of the numerous interesting young athletes who was looking to establish themselves as one of the best in the world. Unfortunately a health scare would derail these hopes on the second day of the competition, as he was sent to the hospital with heart concerns. The atrial fibrillation that he was experiencing forced him out of the competition, and kept him in the hospital overnight for observation.

It would seem that these issues are not keeping Gabriel Peña from getting back to action in a big way. We had already seen some solid work from him since the WSM, but he was back in the training room recently and hit a massive new personal record. As the video he posted to Instagram shows, he managed to land a massive 1,000lb deadlift, which resulted in that PR. It was a solid performance and not one indicative of someone who was in the hospital a few weeks ago.

THE HYPE TONIGHT WAS UNREAL! It was @iamalphafit’s annual Deadlift Party for our strength athletes. A perfect setting for this epic lift.
I am proud to be surrounded by such a strong and driven crew. It motivates me like you wouldn’t believe.”

That was an absolutely stunning performance from Peña, and the joy on his face was evident before he even dropped the barbell. He called this a lifetime goal of his, and it sure seemed that way with the way he reacted after he landed it. As for the lift itself, he had to fight with the weight a little bit, but all things considered it moved fairly well.

Peña has been doing a lot of really solid deadlift work since the WSM. As we alluded to previously, shortly after his withdrawal from the contest, he was back in action to hit a massive silver dollar deadlift of 1,145lb, which was impressive enough. However this was not the only variation that he has been doing solid work on lately. A few days before this most recent PR, Gabriel was also seen pulling a strong 800lb double using an axel bar.

While things did not go his way in 2020, the future seems quite bright for Gabriel Peña. For the most part it seems that the new generation of strongman athletes has been pressing forward, and he is one of the most promising of this group. It will be exciting to see what he can get done next year, after looking so solid to close out this calendar.

Serena Abweh is relatively new to the sport, as her Open Powerlifting record shows that she has competed in only...