Strongman competitor Gabriel Pena pulls half a ton deadlift off of 18-inch blocks 8 days after being hospitalized for heart problems. 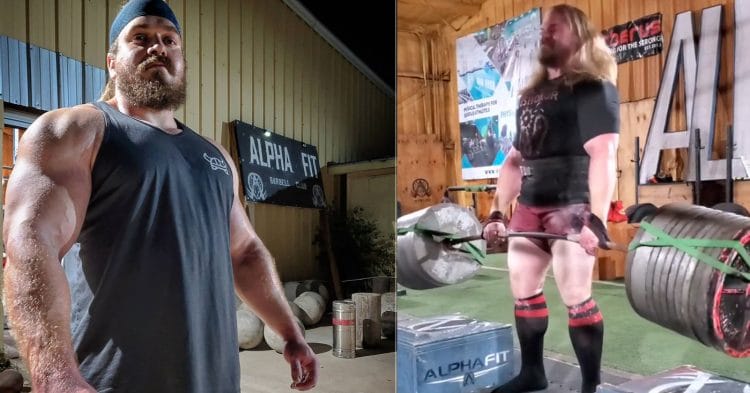 They are called Strongman competitors because they do the things we can not do. Gabriel Pena is doing it again. Just eight days after withdrawing from the qualifying stages for the World’s Strongest Man competition, Gabriel Pena is pulling deadlifts to the tune of 1,145lbs/520kgs.

Here he is with a video posted November 21st showing his strength on an 18″ barbell, which he says is the first time ever doing. He says he prefers the 18″ axle, but noted that “if 18″ barbell is going to be a metric for WSM, might as well practice it.”

He adds, “Most importantly, my heart is feeling STRONG, regular, and totally healthy.”

He apologizes for the video he thought he had trimmed, but his fans don’t seem to mind. You just can’t take your eyes off of this impressive feat.

So it appears Pena is not letting a little atrial fibrillation take him out of the game.

It was November 13th, 2020, when he was in the qualifying stages of the WSM competition and he had to quit due to some medical issues. During Day One of the competition, Pena was performing the Monster Truck Loading Medley when he noticed his heart was beating faster than normal for competition work.

He checked it himself, but the on-site medics came in and directed him to paramedics where he received an electrocardiogram. Moments later he found himself in the Manatee Memorial Hospital in Bradenton, FL, where he was being told he had atrial fibrillation.

This is a diagnosis that indicates the top two chambers of the hear are fluttering a little faster than normal rates. With some rest, Pena left the hospital the next day and went back to watch the rest of the competition. Ever the Strongman, he is doing okay.

Pena was not the only one to withdraw. Ervin Toots also was taken out due to some medical matters. Graham Hicks was as well.

He will have to show some more of this resolve if he wants to accomplish his goal of taking the WSM title from 2020 winner Oleksii Novikov. He already threatened that Oleksii will have to deal with the “Texas Titan” in 2021. This year, Oleksii Novikov pulled a deadlift of 1,185lbs/537.5kgs for a new world record during the World’s Strongest Man, which is just 40 pounds more than what Pena pulled 8 days after being released from the hospital for atrial fibrillation.