After going back and forth with Jerry Pritchett, strongman JF Caron managed to come out on top, scoring a new Hummer Tire Deadlift world record at the Shaw Classic 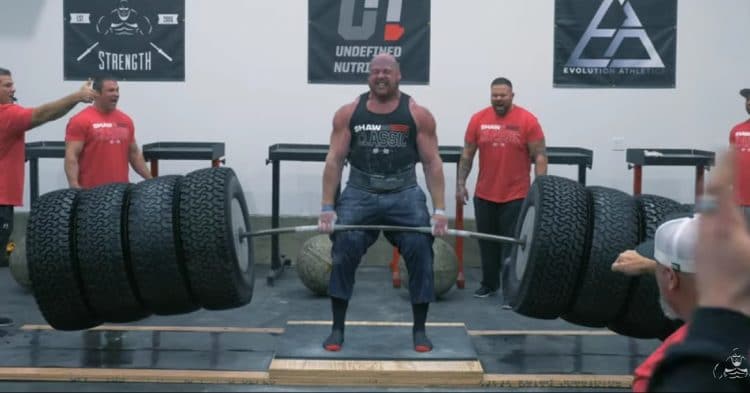 The majority of the action from the 2020 Shaw Classic is behind a paywall online. However the performances between JF Caron and Jerry Pritchett during the Hummer Tire Deadlift event were so incredible, that Brian Shaw decided to share the event with fans for free.

All things considered, the inaugural Shaw Classic was a massive success. Not only did it feature two of the top three winners of the 2020 World’s Strongest Man, with JF Caron and Oleksii Noikov, but had a whole slew of elite strongman athletes and officials. The contest was streamed on Brian Shaw’s Club Shaw, where you can still pay for a subscription and watch it. Over the course of weekend there was a ton of great action, with Shaw himself winning the whole thing.

When providing his fans with the results of the contest, Brian Shaw hinted that there was a pretty special moment that occurred during the Hummer Tire Deadlift. He had been excited about this particular event heading into the contest, so his reaction seemed to suggest that what went down was worth watching. This appeared to be the case too, as a few days later he uploaded the event to YouTube, so people can see what went down for free.

“After the epic deadlift battle that happened at the Shaw Classic, we have decided it is only fitting to put out some footage of that event so that the incredible performances that all of the athletes put on could be on display and they could get the recognition they deserve,” Shaw explained. “Now, we will not be putting out the rest of the Shaw Classic on YouTube. That will remain on the Shaw Elite Club if you want to go check that out, but I hope and I know that you will enjoy watching this.”

The video begins with Shaw recapping day one of the competition and looking ahead to the second day. Then the event begins, as athletes rotate to take turns attempting the Hummer Tire Deadlift, with the weight increasing until the strongman are unable to continue. It starts off with 830lb, which all athletes score with no issues, before jumping up 50lb to 880lb, and continuing the increase from there.

Things really heat up as the weight reaches 1100lb, where most of the athletes have dropped out. The only men remaining are Jerry Pritchett and JF Caron, as they each face off at this weight. The two continue going back and forth as the weight slowly creeps up, and approaches the world record 1155lb. Both men passed that with 1159.5lb, and were not done there. JF came back with a whopping 1202lb, extending the record by 47lb. Unfortunately, after giving it two attempts, Pritchett was unable to match this weight, leaving JF as the winner, and new world record holder.

You can watch the full event below, but the battle between JF Caron and Jerry Pritchett begins at about 29:03.

This was an insane war of attrition between JF Caron and Jerry Pritchett. The fact that they both beat the previous world record was insane, but they continued to propel each other to reach their full limits. It would be interesting to see them do a one-rep max on this deadlift, so that fatigue was less of a factor in the weight.