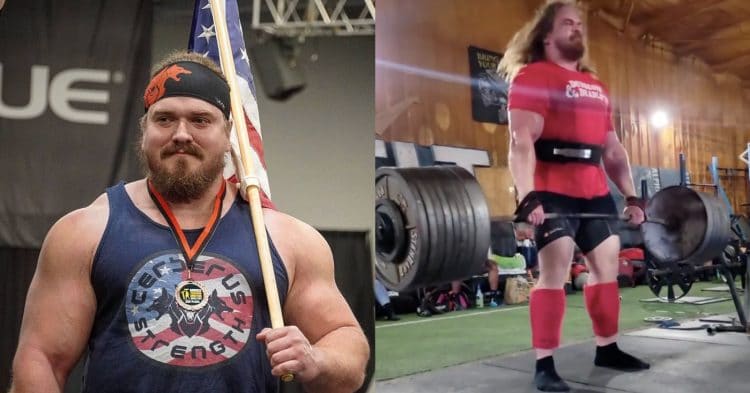 Strongman Gabriel Peña may not be competing at the 2021 World’s Strongest Man next week, but he has a world record deadlift attempt planned for August. He made some major leaps towards that goal, with a huge deadlift triple, which he hit in training recently.

Peña was clearly feeling good in this gym day, because he managed to pull off a 900lb deadlift triple, while wearing just lifting socks, straps, and shin guards. He shared the footage on Instagram, and it had the whole strongman community buzzing.

My engine is roaring and waiting to be unleashed,” he wrote.

This was an insane showing from Peña, who was unfortunately was unable to compete to his fullest in his World’s Strongest Man debut, last year. He was forced to withdraw from the contest on the second day of competition, due to a heart complication.

However this was a minor setback for the Texas Titan, as he turned right around from this, and was back in the gym with a massive performance. He followed this up with another jaw-dropping deadlift in the training room, landing a new PR and proving that his issues from the WSM were short-lived, and would not affect his future performances.

It is no coincidence that Gabriel Pena has been putting together such insane deadlift performances in the gym. This is all been in preparation for a world record deadlift attempt, which he has scheduled for the Giants Live 2021 Manchester World Open, slated for August 14th.

In order to hit this world record, Gabe would have to you deadlift a whopping 501kg (1104.52lb), which is not an easy task. This is the record that Hafthor Bjornsson set last year, and we have seen people try and fail to break it since he scored it.

That being said, Peña has been setting the tone to prove that he is on track to, at a bare minimum, put up a solid effort. It was not even a month ago that he was doing 800lb for 4 reps, and he is continuing to make these kinds of steady gains.

It is certainly a shame that Gabriel Peña could not fully live up the moment in his WSM debut, and he is missing this year’s competition. However if he is able to secure the deadlift world record, there will be no denying the skills of this strongman any longer.