The Goblet squat is a functional movement with aesthetic benefits! 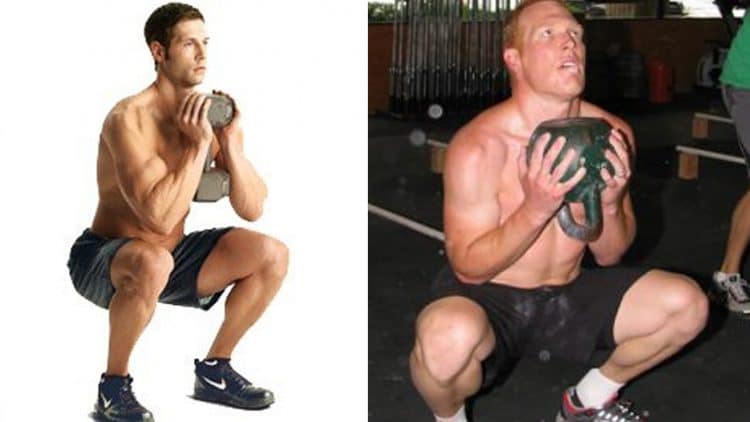 The squat reigns supreme as the king of lower body exercises and few would disagree. But it’s actually a full-body movement that targets multiple muscles and the strength gains are ridiculous when you consistently implement progressive overload.

Now, of course, there are many variations of the squat that you can do for maximum leg development; of which the Goblet Squat is a popular one…

But the goblet squat is much different than the conventional barbell back squat; however, it has its place in a leg workout routine. There are functional benefits and if your squat form is lacking where safety is a concern; then the goblet squat shines in this area as well.

Here’s some very beneficial information on the goblet squat which includes the benefits, exercise instructions, and variations…

What Is A Goblet Squat?

A goblet squat is a lower body movement similar to the barbell back squat but you use either one kettlebell or dumbbell as resistance. The weight is held in front of the body and the movement is very beneficial for the learning and improving body mechanics during the squat.

Now, you were probably wondering where the name came from. So, we feel it’s only fair to tell you how the goblet squat came about…

Well, a strength and conditioning coach by the name of Dan John actually invented this variation because he saw a need for a movement that would teach proper body mechanics during the squat. But the movement actual looks as if you’re holding a goblet!

The goblet squat is obviously a lower body exercise but there are other muscles involved.

Every leg muscle is targeted during the goblet squat from the quadriceps, to the hamstrings, glutes, and calves. Knee and ankle flexion plus hip extension are necessary to fully train the quads and the posterior chain (backside of the body) muscles (hamstring, glutes) are engaged from squatting through the heels.

The back muscles and mostly the spinal erectors are worked to a degree with the goblet squat. However, the movement is not a substitute for direct back training or even a deadlift for maximal stimulation.

The front deltoids are engaged to maintain the weight at chest level during the goblet squat but all shoulder muscles are engaged.

The goblet squat requires core stabilization to maintain an upright posture. And full-body movements are an effective way to indirectly work the abdominals and obliques.

Resistance training builds muscle plain and simple. But how much muscle you build depends on several factors like the weight used, genetics, growth factors, repetitions, intensity, nutrition, hydration, sleep and more. But to get a muscle to grow where purely weight training is concerned, you must consistently increase the poundages and/or increasing the number of repetitions to a degree. (1, 2, 3)

Progressive overload builds strength and you should do at least one day per week where you are training pretty heavy to really challenge your muscles. A good strategy is to increase the poundages by 5 pounds per week if possible unless you feel you should do slightly more or less.

However, we’ll provide a workout where you can progress pretty quickly regarding strength gains but don’t be alarmed when you hit a plateau as its normal. But in that case, you can mix up your routine and you’ll eventually run out of weight with the dumbbell and kettlebell; in which you can increase your reps or focus more on the barbell back squat.

But there’s also the landmine goblet squat variation which we’ll show you and you can use more resistance.

Full-body movements like the squat will aid in the weight loss process but the effectiveness depends on the intensity and number of repetitions. The more you move the more calories you’ll burn and it takes burning approximately 3,500 calories to lose one pound. (4, 5)

Working up and down the dumbbell weight rack is a great workout to burn calories.

Full-body movements require more energy and oxygen. Therefore, you’ll increase your aerobic capacity which will allow you to train longer and harder as your endurance improves. If you train at a faster tempo then you can improve your aerobic performance even more.

How To Do The Goblet Squat

It’s always recommended to do a few warm-up sets before doing your working sets. So, start with 30-40% of your one-rep max and work your way up to the working sets (Two sets are usually sufficient).

A proper squat should allow you to perform the movement close to your center of mass which will protect the spine and allow you to lift the weight properly.

Here are a few variations you can do to further improve your performance and results.

Perform the goblet squat like normal but when you stand up press the kettlebell or dumbbell overhead. But be very careful to have a good grip and even keep the weight slightly in front of your head.

Want to build a kettlebooty? Try this movement out…

Wrap a band around both legs just above your knees and keep tension on the band. Then perform the goblet squat like normal. Using a band will keep tension on your glutes which is great for muscle development and posterior chain strength improvements.

The landmine variation is excellent for loading the anterior and improving posterior chain mechanics during a squat. The barbell is in contact with the floor which improves coordination and balance since you are working to stabilize the weight.

But a neat benefit of the landmine variation is that each time you perform the negative, the weight forces your hips back which is ideal for improving your squat form.

Make sure one end is secured to the floor and place the loaded end on a bench. Grip the end of the barbell with both hands so your elbows are pointed down and move your chest right up to the bar. Squat the weight up and keep everything tight while squeezing your glutes. Come back down into the bottom of the position like the video shows…

Who Should Do The Goblet Squat?

Anyone who has sufficient ankle and hip mobility but these limitations can definitely be worked on. The goblet squat is an excellent movement which encourages ideal squat technique. It’s also a very good place to start if you’ve not yet performed the barbell back squat.

At first, you’ll want to perform the movement more frequently (4-5 days per week) to get it down properly and perfect your form.

This workout is called the “Triple Digit Goblet Squat Workout” because the goal after 6 weeks is to be able to do the movement using a 100-pound dumbbell safely.

Train light for the first two weeks and make sure you can do the exercise effectively before increasing the weight.

For week 3, you’re going to be squatting three times a week with one day of rest in between.

Repeat week 3 but do three repetitions per set this time with heavier dumbbells.

The focus for week 5 will be building muscle and strength since you should have the technique down by now. Follow the same three days per week training frequency with one day of rest in between.

Dan John says that for this week “if you can pick it up, then you can squat it”.

You’re Ready For The Goblet Squat!

And that concludes most of what you need to know about the goblet squat. There’s no doubt it’s an effective and safe movement that most people can do and the benefits are definitely worth the effort. It’s a movement that is very beneficial for learning ideal squat form and there are many options too.

Try the different variations out when you feel you’ve mastered the movement and hopefully, you’d even be up for the “Triple Digit Goblet Squat Workout” too.

The goblet squat is a viable squat alternative or variation you can use to further your overall development!

The glutes are the biggest and strongest muscle group in the body. But, they usually do not get the same...