We have more details on the situation 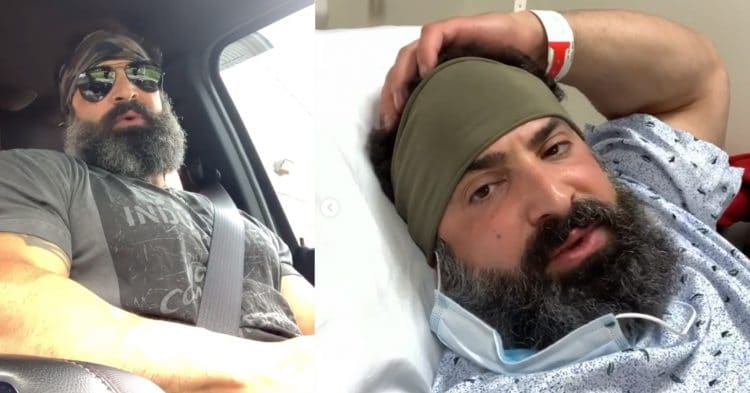 Well-known bodybuilder Guy Cisternino had a recent health scare after being hospitalized due to what we learned may have been a blood clot in his calf muscle. Although, when he arrived at the hospital, he wasn’t quite sure what the problem was.

“Little update for you guys who been asking me. I’m in the ER, not sure exactly what it is yet, I just got saw by a nurse that thinks it’s a blood clot so I’m waiting testing and to see the doctors/specialists. Another day in the bad luck chronicles of Guy lol. All seriousness I’m hopping it’s nothing but by the looks, feel, and symptoms it’s definitely something, just not sure what it is. Stay safe guys, and God Bless!“

So now that Cisternino is out of the hospital, he obviously has a better idea of why he ended up in the hospital and he shared the details via Instagram. Here’s what he wrote on the post to accompany the video…

Ok guys and gals, this is the full video explaining the diagnosis, how it happened, the incidents leading up to it, and what to pay attention for. Also if you know anyone that had or has Covid19, this is EXTREMELY IMPORTANT SO PAY ATTENTION!!!! Also i couldn’t post the Ultra sound it’s on my STORY. Be blessed everybody“

Cisternino started off explaining that following a back training session three weeks ago on a Monday, he went home and got out of his truck of which he experienced what felt like an awful charley horse (muscle spasm) in his right calf muscle.

So he decided to do some therapy for it of which it started to improve. However, at the end of a leg training session four days later, Cisternino explained that he took a hard step that felt as if he tore his calf muscle right off the bone.

But he said it didn’t even look like he tore it as there was no bruising or anything. So the following day he went to the same therapist of which they used something called a Shockwave therapy machine. He mentioned that it helped to recover both of his shoulders before.

So he felt better that same day although when he woke up Saturday and went to the gym to train arms, his calf started to really bother him again. This time it was really red and swollen. But he let it go because he just assumed it was due to the therapy.

However, it persisted to the point where he had to text the doctor who doing therapy on it to let him know what was going on because he knew something wasn’t right. So he went home and took a picture of his calf and after he sent it to the doctor, he was told that he needed to go to the ER immediately.

The doctor told him he thinks it’s a blood clot and so Cisternino drove himself to the ER before they discovered he had a clot in one of the veins of his calf.

So they gave him aspirin and advised no leg training for a few weeks. He explained that he had an appointment scheduled with the Hematologist (the day he posted the video below) to have another ultrasound and see how things were coming along.

Cisternino had no idea though that what caused this clotting was the novel Covid-19 that has taken a real toll globally.

“Apparently, how it was explained to me, is one, Coronovairus causes clotting, so now people that had the virus that survived, there has been an extreme influx of patients with blood clots of seizures which I had no clue about,” he explained.

“That is what caused the virus, it was solely the fact that I had the Coronavirus and this was a direct result of having it“. “It’s scary because if the clot breaks off I could be in serious trouble… seizure, death, so it’s scary knowing I’m walking around every day wondering what the f-k is going to happen with this thing in my calf.”

Cisternino is taking it easy now, he’s still working out but not doing anything crazy. He requested that anyone who has gone through something similar share their experience as well as anything that they’ve done to help with it.

Guy Cisternino was a close friend of Shawn Rhoden, and has been tearing into people for talking about him after...

A controversial figure in the sport, Shawn Ray recently did an interview, discussing what he believed caused the death of...