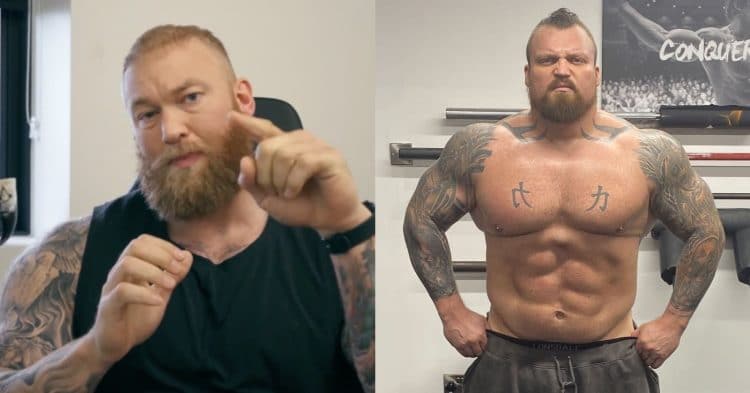 Hafthor Bjornsson and Eddie Hall will be fighting at some point early next year, but Eddie wanted to raise the stakes with a challenge for charity. Thor has finally responded, and he has his own offer for his rival.

Hall offered Bjornsson a challenge to add an element of charitable donation to their grudge match that will be settled in the ring. He extended the wager that the winner of their fight gets to pick a charity and the loser must donate $100,000 to it.

He then raised the stakes when he did not hear anything from Thor. This time around, he said that if Thor loses, he will have to donate $100,000, but if Thor wins Eddie will donate $200,000 to the charity of the Icelandic champion’s choice.

“Well, it’s been over a week and he’s ignored me, and I’ve heard from a mutual friend that he doesn’t want to do the deal because he’s scared to lose. Which, I don’t blame him. So, I want to make this a bit easier for you Thor, and please everyone put pressure on him now. So the new deal is, if I beat you, you have to pay $100,000 to my choice of charity. If you beat me, I will pay $200,000 to your choice of charity,” Hall said.

“Come on now, don’t ignore me, this is for charity. We’ll get the promoter to put it right into the contract, so there’s no getting out of it. So everyone put pressure on Thor, and don’t ignore me again. Let’s pull the deal on this, let’s do something good for charity.”

Hafthor Bjornsson Has A Counter Offer

It seems that Hafthor Bjornsson has heard these challenges from Eddie Hall, and has decided to respond with a video posted to his YouTube channel. The first thing he did was deny the accusation that he did not respond because he was afraid to lose.

Thor then offered a challenge of his own, where both he and Eddie will donate $200,000 each to charity, win or lose. The winner of the fight will be allowed to choose the charity that gets the money, and it will be put in their fight contracts.

“First off, I would like to say I didn’t ignore you. I’m a busy guy. I have other things in my life that I have to take care of. That’s my training, my sleep, my nutrition, and of course, my family. Those four things my priorities in life, it’s not replying to you. So I’m sorry if I’m offending you by saying that, but that’s just the truth. I understand that you really miss me, and you want me to respond right away. Those things are my priorities, not replying to you, so keep that in mind next time,” Bjornsson said.

“Anyway, I love this. I love to give back, I’m all about charities, so I’m absolutely down. I’m perfect for this. But I actually have a counter offer for you. I would like to match your $200,000, and I would like to give those $200,000 to a charity, and I would like you to do the same thing, no matter what. Win or lose, we both get a win, and we give more to charity. The winner of the event will of course get to choose where that $400,000 goes to, which charity. If you accept my counter offer, we’ll have the promoters add that into the contract, so there’s no way of getting out of it…

“I have one final thing to say,” Bjornsson added. “I predict to knock you out in round four. How? With an uppercut. So be ready, train smart, train hard, stop the bulls—t. Let’s make this fight happen.”

Eddie Hall made a point to respond to this challenge from Hafthor Bjornsson in quick fashion, posting a video just mere minutes later. In it, he accepted the offer for each man to pay $200,000 to charity, even saying his choice of charities would involve something to do with mental health.

The originally scheduled date for Hafthor Bjornsson vs Eddie Hall was canceled due to Eddie’s torn bicep. However with him back to training, hopefully they will be able to get a new date scheduled for the heaviest boxing match of all time.