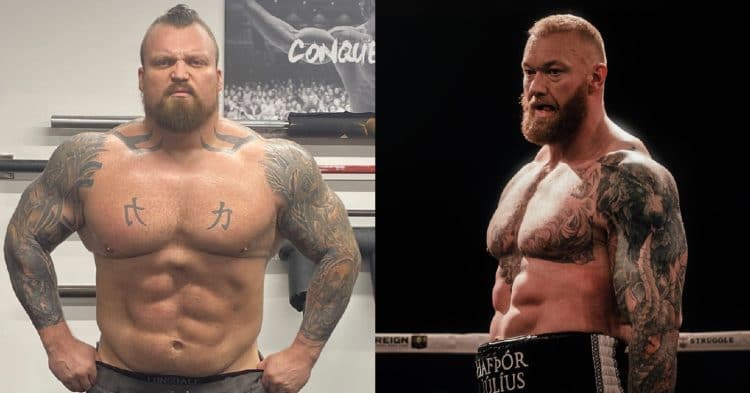 There is a lot at stake for both Eddie Hall and Hafthor Bjornsson in their boxing match, even before Eddie challenged Thor to a bet for charity. Now Eddie is raising the stakes even more, at least on his end of things.

After a torn bicep derailed their initial date, Hall and Bjornsson are hoping to settle their strongman beef in the boxing ring at the beginning of the year. The two have been hard at work to learn the sport and prepare, with Hafthor even taking some exhibition fights along the way, to get used to the atmosphere of fighting in front of a crowd.

Recently, Eddie issued a challenge to his bitter rival, to add to the excitement of their fight. He was attempting to get Hafthor to agree that the loser of their fight has to pay $100,000 to the charity of the winner’s choice, which is a noble cause to say the least.

Having not heard a response from Hafthor Bjornsson on this challenge, Eddie Hall has decided to up the ante. He took to Instagram to say that he heard Hafthor did not accept the challenge out of fear of losing, but now Eddie is willing to make it so that he will have to pay $200,000 charity if he loses, while Hafthor’s amount stays the same.

“Well, it’s been over a week and he’s ignored me, and I’ve heard from a mutual friend that he doesn’t want to do the deal because he’s scared to lose. Which, I don’t blame him. So, I want to make this a bit easier for you Thor, and please everyone put pressure on him now. So the new deal is, if I beat you, you have to pay $100,000 to my choice of charity. If you beat me, I will pay $200,000 to your choice of charity,” Hall said.

“Come on now, don’t ignore me, this is for charity. We’ll get the promoter to put it right into the contract, so there’s no getting out of it. So everyone put pressure on Thor, and don’t ignore me again. Let’s pull the deal on this, let’s do something good for charity.”

At the time of writing, there has been no response from Hafthor Bjornsson, nor any indication that he is interested in taking this increased challenge from Eddie Hall. Either way, this would be a fun way to turn a big fight into something good for the world.