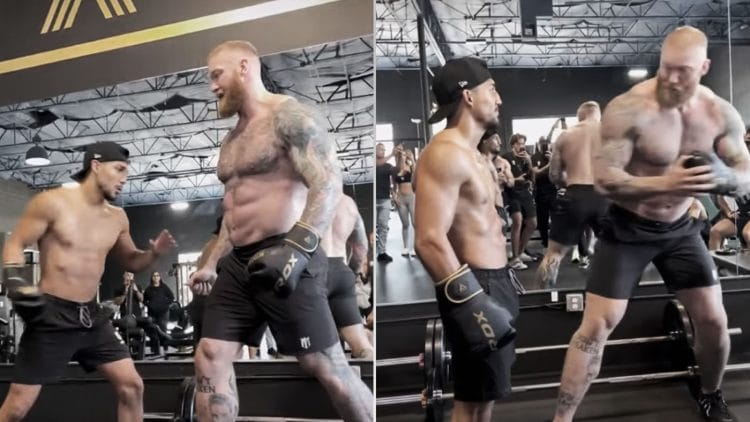 World Lightweight champion Teofimo Lopez seems to be getting along well with  2018 World’s Strongest Man turned professional boxer Hafthor Bjornsson. Lopez recently uploaded videos of him participating in the body shot challenge with Bjornsson on his Instagram account.

The pair of videos shows Teofimo Lopez and Hafthor Bjornsson taking turns to hit each other with body shots with incremental power. To the surprise of many, Lopez took the much bigger Bjornsson’s body shots quite well.

One of Thor’s thunderous body punches staggered Lopez backward but he managed to absorb the devastating power to his mid-section. When the roles were reversed, Hafthor Bjornsson remained unfazed for the most part. However, a well-placed body shot from Lopez got Thor’s attention as he acknowledged it by saying ‘That was nice’ after letting out a roar.

“David vs Goliath! Went punch for punch with the World’s Strongest Man! #TheTakeover #TheMountain” The caption to one of the videos read.

Hafthor Bjornsson acknowledged Teofimo Lopez’s power in the comments section as he wrote:

‘I felt that one brother 😖’

To put Hafthor Bjornsson and Teofimo Lopez’s size difference in perspective, Lopez stands 5ft-9in tall and competes in the 135lbs (61kg) division for professional boxing. The 6ft-9in tall Hafthor Bjornsson has lost a significant amount of weight since he transitioned to boxing. However, he weighs in the 340lbs (155kg) range which is more than enough to create a massive power difference.

Both Teofimo Lopez and Hafthor Bjorsnsson will return to competition in the next few months and have their eyes set on their opponents. After unifying the IBF, WBO, WBO (Super), and Ring Magazine titles with an upset win over Vasyl Lomachenko in October 2020, Lopez was expected to defend his title against undefeated Australian Boxer George Kambosos Jr. on June 5, 2021. However, owing to contractual and purse bidding disputes as well as Lopez’s battle with Covid-19, the fight has been delayed multiple times.

As per the latest reports, Teofimo Lopez is expected to meet George Kambosos on November 27 at the Hulu Theater in the Madison Square Garden in New York. The fight will be shown exclusively on the streaming service DAZN.

Hafthor Bjornsson was scheduled to fight his archrival Eddie Hall in September 2021. However, a bicep injury and subsequent surgery forced Hall out of the bout. Bjornsson faced arm-wrestling ace Devon Larratt instead on September 18th and won the fight by a first-round knockout. Hall has returned to training since his surgery and the pair is expected to fight in March 2022 to settle the age-old rivalry once and for all.

Both fighters are training hard for their upcoming encounters and the body shot challenge only shows that the conditioning is where it needs to be. However, the challenges waiting for Teofimo Lopez and Hafthor Bjornsson are not easy by any stretch of the imagination. It will be interesting to see how the training translates into their performance on the fight night.