Hafthor Bjornsson Updates On His Boxing Training, Promises To Finish Eddie Hall In Round One 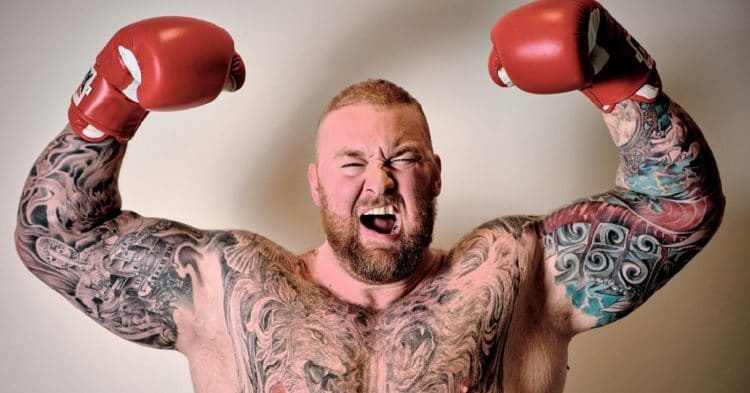 There is a real beef between strongman rivals Hafthor Bjornsson and Eddie Hall, ahead of their boxing match. Now Thor has given a training update, while breaking down his game plan for the fight.

Fans around the world are hyped to see the Bjornsson vs Hall boxing match, in just over a year. Both men have been hard at work to train and learn this new sport, all while getting prepared to face each other in the squared circle. In the process both men have lost a ton of weight, simultaneously never wasting an opportunity to poke fun at and talk smack to each other.

Most recently, Hafthor Bjornsson was back in the gym working alongside his boxing trainer yet again. A video recently uploaded to YouTube saw the Mountain with his gloves on in the ring, moving around and throwing his hands. Warming up with some shadow boxing and heavy bag work, he explains that he is really enjoying the training. Then he sheds a bit of light on what his game plan is for the fight, as well as a prediction for how the fight will go.

“(Eddie is) going to come out swinging, relying on his raw power. But I’ll outbox him and burn him out early,” Hall said. “(He says) I will gas out in the first round, that I won’t have the endurance for even the one round, which I find hilarious because I’ve been an athlete my whole life. What I do best is training, I love training. You’re silly if you think I won’t show up in the best shape of my life for this event. I’m going to be training very hard for this event, very hard. I can promise you guys that I will last, if I need, all the rounds. But I doubt it will go all the way. I’m feeling really good, I’m seeing huge progress. I’ll probably knock the fat guy out around one or two. That’s my prediction, but I’m also ready to go all the way to the end, if that’s the case.

“The best case is to make him look like a fool,” Bjornsson continued. “Just bounce around, just make him suffer. I want to make him pay. He’s been talking a lot of s–t lately, and it’s payback time. He’ll be begging for mercy.”

Hafthor Bjornsson finishes off his training session with some high intensity training, involving sprints, push-ups, planks, and squats. He ends the video by saying that he is feeling better every time he finishes training. It would seem that his training is coming along well, and the progress is being made.

Who do you think will win when these two giants square off?