In His Return To Egypt, Big Ramy Blasts Through Heavy Arm Workout 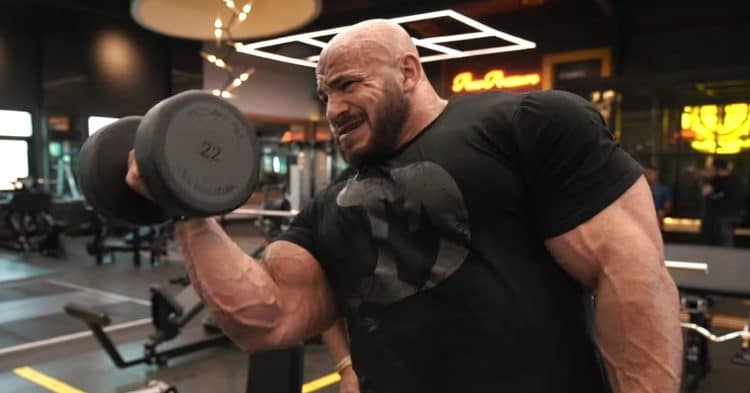 There may not be a competition in the immediate future for Big Ramy. However, that does not stop him from crushing a killer arm workout in a recent training session.

Easily one of the most popular bodybuilders in the world today, fans are always excited to see Ramy compete and put hit physique on display for everyone to behold.  However, it has not been that long since he was last competing, in spite of trying other ventures, dealing with travel and injury woes, and of course the global pandemic. Despite all of this, he has still been hard at work and staying busy, training as ferociously as one would expect from someone who is competing soon, rather than somebody who has only competed once this year, scoring third place at the Arnold Classic.

Now Big Ramy has finally returned to his home country of Egypt, and was looking to get in some work now that he is back. So taking to the Dragon Pharma YouTube channel, the beastly burner bodybuilder decided to check in and give a glimpse into what it is that he is doing. The focus of this session came down to arms, and after taking some preworkout, as well as a brief a warm up with some dumbbell raises, he did the following workout:

For every single exercise, Ramy pushed himself to the absolute limit. There were multiple times that his trainer, who was alongside him for the workout, would tell him to do two more reps, but he would instead push for three extra on top of that. It is clear that he was feeling motivated for this session, despite it not being for competition. Speaking after the workout he explained that his belief is that he should always give it his all, no matter what he is doing next.

“Yes I am a little tired but I have to train like that every day. It’s not about if you have a competition or not, but you have train hard to be the champ, to be number one.”

This was a pretty strong workout session from Big Ramy. While he does not have anything officially on the books in terms of competition, he is staying ready for an opportunity to qualify for the 2020 Mr. Olympia. If that opportunity winds up presenting itself, he looks to be ready to capitalize on it.