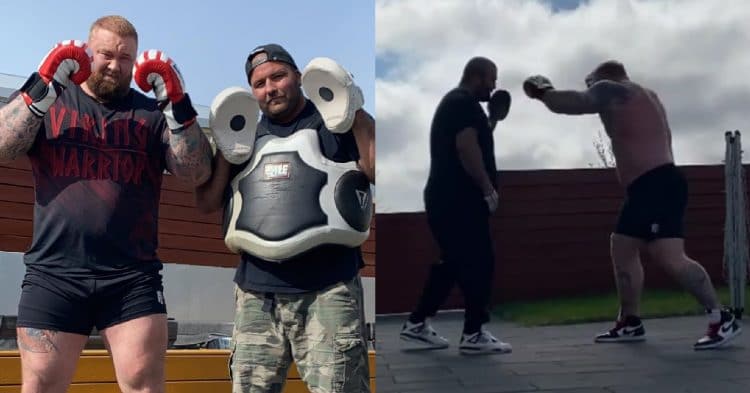 It would appear that Hafthor Bjornsson is taking his boxing match with Eddie Hall quite seriously. Despite it still being more than a year away, he has recently shared some footage of him punching mitts, and working on his striking technique.

When Bjornsson revealed that he wanted to fight Hall, the sports world started buzzing. It is not often that we see two behemoths like these men step foot in a boxing ring, trying to put hands on each other. Therefore people have been speculating like crazy, wondering how the fight would go.

Although the bout is not scheduled to take place until September of next year, Hafthor Bjornsson has already been training pretty hard. He has shared some pictures recently of him wearing gloves and doing work. However he recently took to his Instagram to share a video of himself, punching focus mitts with his trainer, showing his skills so far.

“Long journey ahead. I’ve been training boxing now for about a week. I need to improve my game a lot and I’m looking forward to putting in the work! This is my 6th session with @skuliarmannsson 🙌🏼 when I started this journey 10 days ago, I weighed 206kg now I’m down to 196kg. I will drop much more weight in the coming weeks and months as I work on my endurance and technique.”

As Thor alludes to, he still has a lot of room to grow with his striking game. However he seems to be putting in the time to earn that skill. Moreover he says that he has been thinning down as his training commences, which will help him with his cardio, in the long run.

Bjornsson has been working alongside his teammate Skúli Ármannsson. Although Skúli is primarily involved in strongman, he does have experience with boxing. As a result, he is able to provide a good place for Hafthor to start training and preparing for this bout.

Hafthor Bjornsson still has almost a year and a half before his fight with Eddie Hall. It will be interesting to watch both of these men train and progress, and their fight is sure to be exciting.