Eddie Hall gives his thoughts on Hafthor Bjornsson's fight with Devon Larratt, tears into his rival 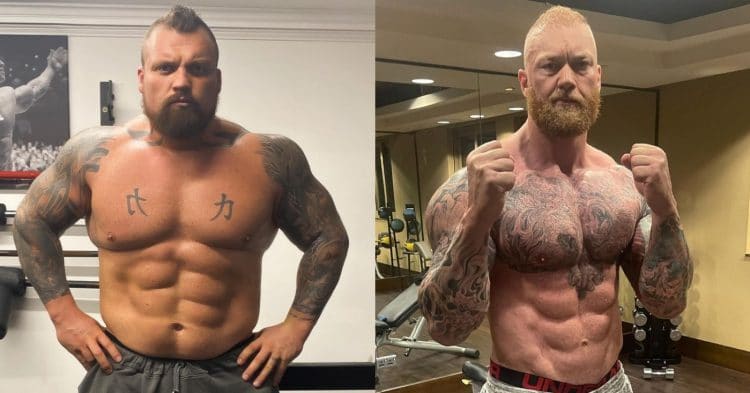 It is no secret that Eddie Hall is not a fan of Hafthor Bjornsson. Ahead of Thor’s fight with Devon Larratt, The Beast tore into his bitter rival, wishing Devon luck in beating The Mountain.

It was supposed to be Hall who is fighting Bjornsson this weekend, after more than a year of preparation and build-up between these two longtime rivals. However Eddie suffered a brutal bicep tear, which forced the fight to be delayed, hopefully just until the early part of next year.

Now Hafthor will be facing arm wrestling champ Larratt, who has no boxing experience, but appears to be confident after training at elite MMA gym TriStar Gym. Ahead of this fight, Eddie spoke in an interview, alongside Devon, and he gave his utmost support to the arm wrestler, making it clear how he wants the fight to go.

“I would pay good money to see Devon rip his chin off and take a piss on his face,” Hall said.

“Devon, good luck. I hope you rip his f—king head off. Who knows, after I’ve done beaten the s—t out of him as well, maybe me and you can have a little fisticuffs, eh?”

This was not the end of the comments from Eddie Hall either, as he could not hesitate to take some fiery shots at Hafthor Bjornsson too. Aside from the obvious hopes for Devon to knock Thor out, Eddie still has his own personal beef with the Icelandic strongman.

He reminded everyone just how deep the dislike for Thor runs, and how badly he despises his rival. By taking some seriously personal digs at Thor, he made it clear that he wants to see Bjornsson fail.

“I seriously hate that man. Like, I don’t want that guy to do well at anything in life. He doesn’t deserve anything, he’s a piece of s—t,” Hall quipped.

As far as the fight goes, there is no real way of knowing how Devon Larratt will do against Hafthor Bjornsson. While we have seen Thor compete a handful of times, he got dropped in his second exhibition match, and there is no real indication of how Devon will perform.

At the end of the day though, the major interest is still in seeing Eddie Hall throw down with Hafthor Bjornsson. The plan is for the two to meet early next year, so hopefully those questions will be answered soon enough.