Devon Larratt previews his upcoming boxing match with Hafthor Bjornsson, and details his training for the bout 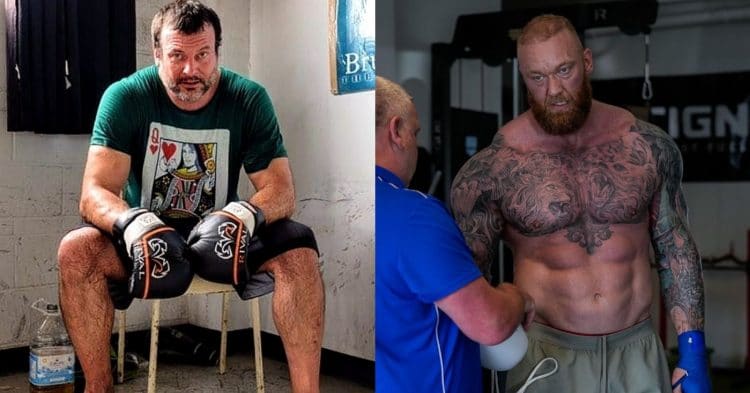 When Eddie Hall was forced out of his fight with Hafthor Bjornsson due to injury, arm wrestling champ Devon Larratt decided to step up on short notice to take the bout. While most people would be scared going into this bout, he seems to be calm and ready for what is to come.

Considered one of the best arm wrestlers in the world today, Larratt is not a man with a ton of boxing experience. Nevertheless, this did not stop him from agreeing to fight Thor on just a few weeks notice, after Eddie tore his bicep while training.

Speaking in an interview with Larry Wheels, Devon joked that this was going to be the easiest day of his life. However he then explained that he knows that he is unprepared for boxing, compared to the level of Bjornsson who has had a pair of exhibition fights, but feels like he is competent enough to put on a show for the fans.

“No, f—k no. But I don’t really care,” Larratt said when asked if he felt prepared for the fight.

“I feel like there’s a lot of growth for me, a lot of growth. So that’s really what I’m focusing on, and making the most of the opportunity, having an opportunity to express myself in a different arena, as an amateur, as a beginner. I think it’s got a lot of a spiritual rewards that I’m going to try to capture.”

He then discussed training at TriStar Gym, where former UFC champion Georges St. Pierre spent most of his career. Devon says that this was a valuable experience for him, and he took advantage of it right away, staying at the dorms in the gym.

“I was just living, getting up in the morning, going and scrapping with the guys. If I had the energy I was doing, sometimes I would just do one session. Getting my breathing, getting my body working, getting used to the sport of boxing.”

Larratt went on to explain that he realized through doing this training, just how much he specialized in arm wrestling, and how the rest of his physical conditioning failed. However when this experience is all over, he says that he will stay in the gym and get more involved in mixed marital arts to stay in shape.

“I don’t want to walk away from fighting again… I won’t focus on it like I am now, but maybe once a week, twice a week, I’ll do a class I think. That’s where my head’s at… Arm wrestling is my thing, but this has definitely taught me that unless I want to feel like a sack of vulnerable flesh, I need to be able to fight better,” he said.

Devon Larratt will be stepping in the ring to fight Hafthor Bjornsson this weekend. Time will tell if he is able to put it all together, and get a win in this boxing match on September 18th.