No Result
View All Result
Core
Fact Checked
Fact Checked
This article was written by one of our qualified writers, and fact-checked by our experts. The numbers in parentheses (e.g. 1, 2, 3, etc.) throughout the article, are reference links to peer-reviewed studies.
Our team of experts include a board-certified physician, nutritionists, dietitians, certified personal trainers, strength training experts, and exercise specialists.
Read Our Editorial Process

You don't need to hang from a bar to get a killer core workout. In fact, these alternatives will work the same muscles and almost anyone can do them. 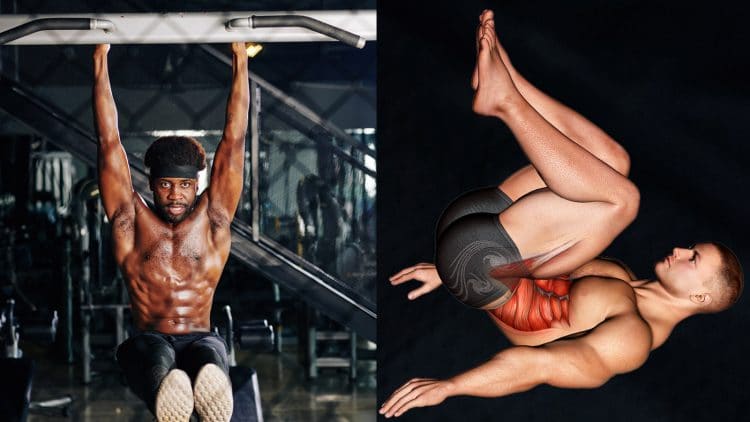 Don’t have a bar to hang from? Or maybe you don’t have the grip strength, or…  it’s possible you’re just looking for some more variety in your ab training. If you nodded yes to any of these variables, the following hanging leg raise alternatives will hit the spot, literally and figuratively.

The hanging leg lift is undoubtedly one of the best core exercises. However, it’s not possible for everyone, mainly because of the strength and flexibility requirements.

There are always options for those less capable to get similar benefits. Then, of course, there are those who like more of a challenge and we included a few movements in this category as well.

The reverse crunch may be the simplest and easiest lower-body involved core movement.

Typically, to do it, you lie on your back and pull your knees toward your stomach while keeping your core tensed.

You can make it harder by attaching ankle weights or doing it on an incline bench.

If you can’t do a hanging leg raise from a bar, chances are you can on a captain’s chair or power tower.

Your body is supported by your forearms but your back, shoulders, and triceps help to keep your body up.

But because the back pad supports your body, it’s easier to focus on the movement rather than having to also keep your body still and from swinging.

The captain’s chair bent-knee raise is the easiest variation of this exercise. 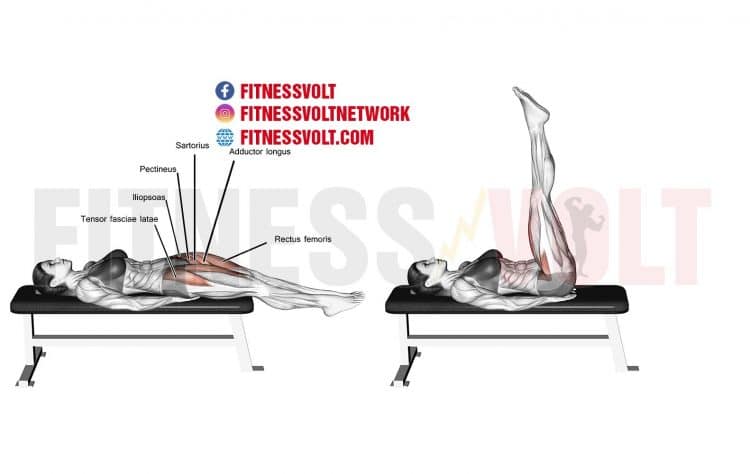 The lying leg raise is undoubtedly easier to do than its hanging leg raise counterpart. That doesn’t mean it’s easy though. You still have to use your core muscles to lift the weight of your legs which is challenging, and especially the more reps you do.

The key is to keep your legs straight which creates a longer lever and therefore, more of a challenge to the muscles of your midsection.

To increase the tension on your abs and get a better stretch in your midsection, the recliner crunch is a good choice.

The great thing about it is that you can do it with minimal to no equipment.

Similar to how you’d recline in a chair, you want to lean your torso back. It’s harder to do than most exercises that involve lying on your back because you need core strength to maintain the recline and balance to perform the movement.

You could do this exercise on the floor, or using a bench, chair, etc.

To engage your core muscles even more than the standard lying leg lift, try the lying hip raise. The abs function to curl the pelvis toward the ribcage and so it only makes sense that you want to try and use as large a range of motion as possible.

By placing your body on an incline bench or object, your legs have to overcome greater gravitational forces which creates more resistance and more of a challenge.

Additionally, one possible advantage of doing decline leg raises is that it’s better for maintaining constant tension on the muscles. This could potentially increase overall muscle stimulation which could result in better gains.

This also applies to many other exercises as well.

If you want to step it up on the captain’s chair, try the leg and hip raise to take your core activation to the next level… literally. You’ll have to move your pelvis even higher than you would for the basic knee or hip raise which, again, will engage your core a little more.

The V-up is another challenging core exercise and it gets the name because the body forms a V shape at the top of the movement.

While it’s not necessarily possible to target one part of the core muscles, the V-up incorporates the upper body which could potentially increase overall midsection activation.

The hollow body hold is a great upper and lower ab movement. It’s considered a static exercise and it can really strengthen your trunk muscles overall.

However, it can be very difficult to do for most people, especially just starting out.

But there is a way to progress into the full hollow body hold.

Here are some progressions.

Lie on your back, fully bend your legs and pull your knees into your nose while extending your arms forward and parallel to the floor. Your arms should be outside of your legs.

Extend your arms above your chest (not behind your head) and lift your shoulders blades off the floor. With your legs bent at a 90-degree angle, lift them up so your upper leg is perpendicular to the floor.

In the same position from progression 2, extend your arms overhead, keeping your shoulder blades off the floor.

In the same position, extend your legs and now you’re doing the hollow body.

With that said, the knee tuck is one of the better suspension trainer ab movements.

A harder suspension trainer ab exercise is the pike. Not only do you have to be able to support your bodyweight using your arms, but you’ll also have to lift your butt so that your body resembles an inverted “V”.

By doing that, your legs are pulled in toward your stomach and this maximally engages the core muscles.

An exercise that most people have never tried and for good reason (it’s freakin hard), the dragon flag deserved a spot on our list of the best hanging leg raise alternatives.

Now, while it is right up there with the best ab builders, your butt muscles will get just as much a workout. How come? Well, that’s because, when done right, the only part of you in contact with the ground is your head, upper back, and rear delts.

That means your midsection and lower body are lifted up and the glutes are important for preventing your hips from flexing. A proper dragon flag requires fully extended hips.

Not only will this maximize your core activation but it will protect your lower back.

Jeff Cavaliere of Athlean X shows how to do it but he suggests performing eccentric or negative only reps to build up strength and ensure the hips remain extended to progress.

You’ll need to be a strapping bloke (or sheila) to do this hanging leg raise alternative. However, it will give you the same benefits and is very much worth including in your core regime.

It incorporates gymnastics style movement and is very functional as a result. You have to balance your body using your arms and have the flexibility to extend your legs above your head.

There are so many great and creative ways to train your body and the V-sit is one of them.

What Muscles Does The Hanging Leg Raise Work?

The hanging leg raise involves muscles of both the upper and lower body and core.

While these hanging leg raise alternatives involve the same muscles, for the most part, there are going to be differences.

For example, other than a lot of these exercises being easier than the hanging leg raise, most bodyweight core exercises do not involve the forearms and grip.

But some of these exercises involve muscles that the hanging leg raise doesn’t. A good example is the V-sit that requires pushing muscle (chest, shoulders, and triceps) strength.

Then you have the dragon flag that requires a lot of glute strength to perform.

More commonly referred to as the abdominals, these core muscles form the six or eight pack on the anterior trunk. Anatomically, the abs flex the trunk from the top down and the bottom up. The deeper core muscles (transverse abdominis) stabilize the spine to support full body activities.

The obliques facilitate rotation of the midsection like when you turn your upper body to the left and right but they also flex the upper body down toward either direction. While there’s not much rotation during the hanging leg raise, the obliques still get an awesome workout.

Hanging leg raises require forearm strength seeing as your grip has to be strong enough to hold your body weight. Forearms muscles are responsible for moving the wrists, hands and fingers.

While the hips aren’t the primary focus, they are an obvious contributor to hanging leg raises involved in almost every part of the hanging straight leg raise, especially when lifting the legs upward.

But when we talk about the hips, the iliopsoas should be acknowledged for being the largest and strongest hip flexor muscles formed by a trip of the psoas major and minor and iliacus. Strong hip flexors are crucial for just about any total body activity including walking, standing upright, and running.

Are These Alternatives As Effective Compared To the Hanging Leg Raise?

Yes and no. That’s because there are easier alternatives and ones that are as hard if not harder than the hanging leg raise.

The weight of the legs, trunk stability, and arms positioned overhead are what makes the hanging leg raise such a challenging and effective exercise.

Compare this exercise to a much easier movement like the reverse crunch or the captain’s chair variation and you’ll notice the difference regarding the level of difficulty.

But then compare it to the dragon flag and v-sit and now we’re talking about some challenging movements here.

However, the idea is to offer alternatives that will still train the same muscles but that are possible for various experience levels.

A beginner will seldom be able to do what someone more advanced can do. It’s important to take it slow and progress to prevent injuries and allow your body to adapt.

If you were looking for the best hanging leg raise alternatives, you cannot go wrong with the options on this list. There are many great movements and something for everyone regardless of your level of training experience.

The dumbbell fly is one of the most popular pectoral exercises. Most beginner programs will pair it with the bench...

The high-row machine is a popular piece of equipment manufactured by Hammer Strength. You can find videos of top pro...