Learn how to do the hanging pike exercise for a stronger core and hips in this exercise guide. 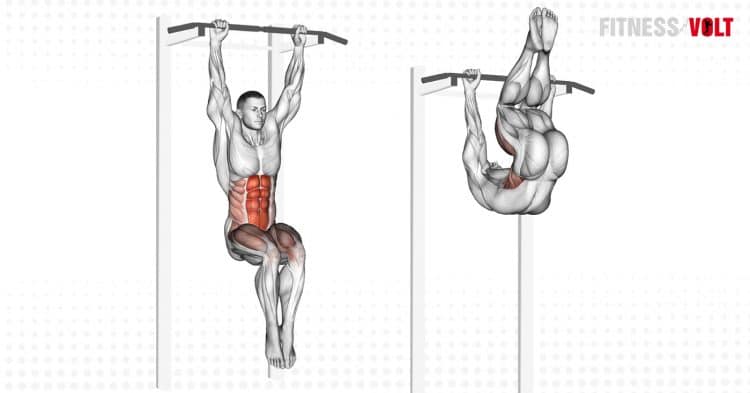 The hanging pike is a leg raise variation that works the abdominal muscles and more. It’s similar to the toes-to-bar exercise commonly performed in CrossFit.

The movement requires adequate grip strength, flexibility, and mobility throughout the body and is not a beginner’s exercise.

In this guide, we’ve explained how to do it with tips, variations, and more.

There are several muscles involved in the hanging pike exercise.

The adductor brevis is one of the adductor muscles that helps to pull the thigh medially (inward). It also helps to stabilize the trunk during certain movements, maintaining balance, and flexion of the thigh.

The adductor longus is another hip adductor muscle of the inner thigh. Therefore, it also pulls the thigh inward. Along with the adductor brevis and magnus it’s one of the strongest muscles of the thigh.

The iliopsoas is the primary hip flexor; made up of the major and minor psoas muscles and the iliacus muscle. It can function as a unit or separately to stabilize and facilitate movement. These muscles are important for proper standing and posture, the coxofemoral joint, and walking and running.

The rectus abdominis is fancy for abdominals, also known as the six-pack” muscles. These core muscles are responsible for trunk flexion (e.g., curl up during a crunch), and they assist during lateral trunk flexion (bending to the side).

The obliques (external and internal) are core muscles located on both sides of the rectus abdominis or “six-pack” muscles. They facilitate trunk rotation and contralateral rotation, and with the erector spinae and rectus abdominis, the obliques help with lateral flexion of the trunk.

The quadriceps femoris or quads for short is a very large muscle located on the front of the upper leg. It consists of four muscle bellies that include the rectus femoris, vastus lateralis, vastus medialis, and vastus intermedius. The rectus femoris flexes the hip while the other three muscles extend the knee.

The quads are important for many daily activities, posture, the gait cycle, and patellar stability.

The sartorius muscle is actually the longest muscle in the body, that is located across both the knee and hip joint. Consequently, it can also function to flex both joints. It also externally rotates the hips.

The tensor fascia latae (TFL) is a thigh muscle that works with several muscles to assist in the movement and stabilization of the hip and the knee. Along with the gluteus medius and gluteus minimus, the TFL internally rotates and abducts the hip. It also works with the gluteus maximus to abduct the hip via the iliotibial (IT) band.

The TFL also assists the rectus femoris in the flexion of the hip, and assists in pelvis stability while standing and walking.

How To Do The Hanging Pike

While the hanging pike is a great exercise variation, we like these too.

The obvious Elephant in the room is the level of fitness one needs to be able to do the hanging pike. For those who cannot, the hanging or captain’s chair knee raise is a great option.

Rather than lift your toes to the bar, the knees are lifted until the upper legs are parallel to the floor.

You still want to engage the core muscles and ensure that your controlling the movement.

If you want to progress, you could do the leg and hip raise to strengthen the muscles that are necessary for doing the hanging pike or its variations.

To make the movement even more challenging, use an incline bench to do the leg raise.

If your up for the challenge, wear some ankle weights to make the exercise more difficult.

It’s probably not a great idea to go real heavy on these but if you get to the point of the bodyweight variation being too easy then it’s a good option to continue progressing.

How To Incorporate The Hanging Pike Into Your Training Routine

The hanging pike is a leg raise variation which means it plays an essential role in a complete core training routine.

Leg raise exercises are generally the most difficult bodyweight variation due to the heavy weight of the legs.

Therefore, it’s ideal to do them first before other movements such as crunches, cable exercises, planks, etc. So in other words, you’re starting from the bottom and moving up to the top where you’ll perform exercise variations that are easier to do.

Anywhere from 2-3 sets per exercise can be sufficient if you’re training your core muscles frequently throughout the week. As for reps, well, this depends on your experience level as similar bodyweight exercises are not as easy to predetermine due to the fixed resistance (your body weight).

Do what you can as long as you can maintain good form. If you can do 25 without breaking a sweat, you may want to add some weight or choose a more challenging movement.

The hanging pike is a core exercise that requires a degree of flexibility, mobility, and total body strength. If you can pull it off, then you’ll have an excellent variation that you can add to your ab training regime.

Exercises that involve hanging from a bar and raising the legs overhead are some of the most challenging and effective by the same token.

We hope this guide was helpful and you don’t have to overthink it, just get to training!

Hit a Bench Press PR With The Smolov Jr. Program