47kg Powerlifter Heather Connor is on a mission to be the best as she breaks another record in training. 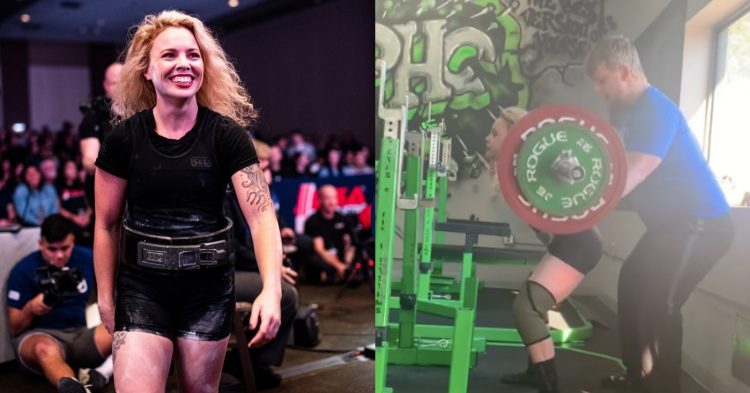 Powerlifter Heather Connor is on a mission to break as many records as possible, or so it seems. Her most recent record occurred in training, when she did the heaviest training squat she’s ever done at 145kg/319lb. But breaking records is just what this motivated 29-year-old does.

This is a woman that does what she decides to do and doesn’t let anyone get in her way.

Connor is known by the International Powerlifting Federation to be the first woman to deadlift four times her bodyweight raw. We also recently reported on a goal she set on New Year’s 2019 to pull 200kg/440lb by the end of 2020, and she did it.

This time around in training she did a 145kg (319lb) squat, which is the heaviest she has ever performed. She said in her Instagram post she ended last week “sad,” but ended this week “bad.”

In this session, Connor is pulling three times her body weight, and 2.5kg above the American record squat. That record is her own, which she set at the 2018 Arnold SBD Pro American and took home the first-place prize for it.

Her stats for that competition were:

Hitting and beating records is something Heather Connor is very familiar with. She holds the American squat record, and also the world record deadlift from the 2020 USA Powerlifting Palmetto Classic where she pulled 185kg/407.9lb. That beat her previous American record of 183kg/403.3lb from the 2019 USAPL Raw Nationals where her deadlift was 397.5kg/876.3lb.

Her training results are often well above those records, and we expect to see Heather Connor crushing some serious competitions in the near future.