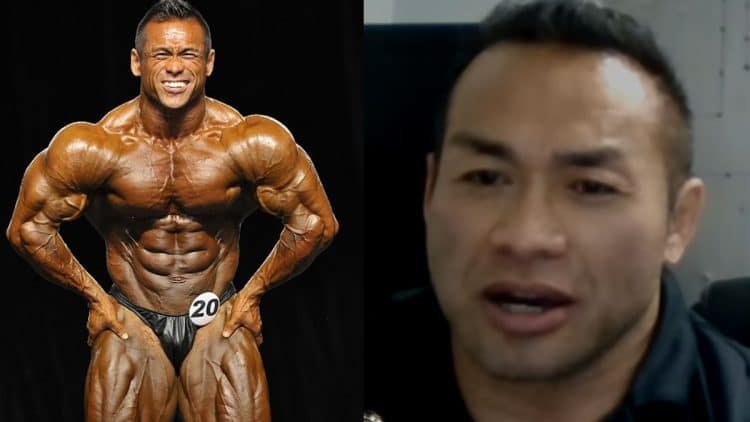 IFBB Pro bodybuilder and 212 competitor Hidetada Yamagishi recently said that he is retired from competitive bodybuilding. Yamagishi’s bodybuilding career spans 17 long years. He made his debut at the 2005 Ironman Pro and last competed at the 2020 Olympia. Hidetada Yamagishi and 10-time Ms. Olympia winner Iris Kyle visited The Menace Podcast on the Muscle and Fitness YouTube channel on February 24 when the former revealed his competitive status.

“Yeah, I am retired. I’ve done everything I wanted. The last show I did was 2000… I think it was 2020… Yeah I did it but you know… During the prep I knew this was going to be my last show. I was happy that I did but I was just there. I knew I wasn’t, I didn’t belong there Physique wise. Like no more…”

Dennis James complimented Yamagishi for the Physique he brought at the 2020 Olympia. However, the latter said that he is aware of how good he can be and replied:

“You know how it is. I know my best and it wasn’t there anymore. But I was happy. I don’t think many athletes can say after all these years (that they are) satisfied with everything (they achieved). And I just want to say thank you to all the fans that are supporting and I don’t want to do it anymore…”

The 48-year-old Japanese bodybuilder made his professional bodybuilding debut at the 2005 Ironman pro and finished second. His 17-year-long career saw him last competing at the 2020 Olympia. Open Pro was the only division in the IFBB pro league at the time and Yamagishi remained competitive against the best the sport had to offer at the time.

Hidetada Yamagishi’s big break came in 2007 when he qualified for the Olympia and finished 13th. This was the time when bodybuilding legend Jah Cutler was dominating the Olympia scene.

Yamagishi won his first pro show in 2010 when he won the Europa Show of Champions. After moving down to the 212 division, Yamagishi won his second pro show when he claimed the first spot at the 2014 Tampa Pro. The 2016 Arnold Classic 212 win was arguably the most notable win of Hidetada Yamagishi’s bodybuilding career. The win brought him to the forefront at Olympia and many considered him to be the biggest threat to Flex Lewis’s throne. However, he finished sixth at the Olympia that year.

In total, Yamagishi won five Pro shows and competed at Olympia ten times in the 212 and Open Pro divisions combined. He currently lives in Las Vegas where he runs the Powerhouse gym that he co-owns with Iris Kyle.

Courtesy of the Muscle and Fitness YouTube channel, you can watch Hidetada Yamagishi talk about his retirement at the 6:07 mark of this podcast episode here: