How Iris Kyle Managed To Carve Her Place In History By Winning The Ms. Olympia 10 Times 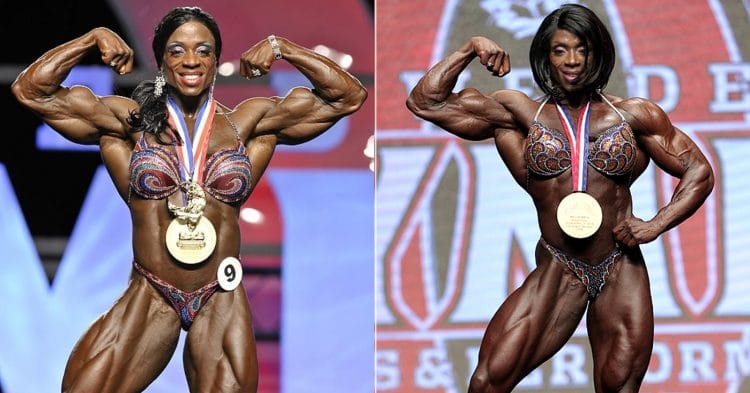 When discussing the men’s side of bodybuilding, it is hard to narrow down the greatest of all time, between Ronnie Coleman, Phil Heath, and others. However for female bodybuilding, that spot is a lot easier to decide. With ten Ms. Olympia titles under her belt, Iris Kyle had done more than enough to cement her place as the best to ever do it. But how did she get there?

Born in Benton Harbor, Michigan, Iris Kyle was the second youngest of six children. This led her to growing up with a naturally competitive streak, that bled over into her early athletic endeavors. Her high school career saw her play softball, cross country, and basketball, with the latter of which earning her All-American status.

This success as a basketball player led Kyle to a load of college scholarship opportunities. However she wound up attending Alcorn State University in Lorman, Mississippi. Here, she majored in business administration, while minoring in accounting, before moving to California, where her life would change forever.

The Bodybuilding Career Of Iris Kyle

Iris Kyle did not begin being interested in bodybuilding until after she had moved to California. Being surrounded by tons of people who were fit and showed off their physiques led her to want to get into better shape herself. Therefore she made the decision to sign up for a gym membership, initially being overwhelmed by all the various pieces of equipment, but immediately feeling like she was in the right place.

Eventually as she began showing substantial results, Kyle was asked to work for the gym, where she started helping others as well. It was around this time that she discovered FLEX Magazine, and Muscle and Fitness, and fell in love with bodybuilding. In particular, she was drawn to the physique of Lenda Murray, hanging up her picture on the refrigerator, and wanting to shape her own body after the Ms. Olympia champ.

As things began to progress, Iris Kyle was approached by a local promoter, who asked if she wanted to compete at the 1994 Long Beach Muscle Classic, on 10 weeks notice. Agreeing to the contest, she came and won first place. Following this successful start to her amateur career, she started working with Patrick Lynn. The two would take a year from competition to work on her physique, before returning with a vengeance.

1996 and 1997 saw Iris competing five times, having some mixed results. Her best performances were a win at the 1996 NPC California, and a second place at the same year’s NPC USA Championships. Things really began to come together in 1998 though, when she was finally able to win the USA Championships, earning her Pro Card.

The first time Iris Kyle competed as a professional bodybuilder was at the 1999 IFBB Ms. International, where she placed a disappointing 15th place. She rebounded quickly though, earning second at the Pro World Championships. This left her with an invitation for her first ever Ms. Olympia event.

First qualifying for the Ms. Olympia in 1999, Iris Kyle landed in the fourth place position. Fans were blown away with the muscular physique that she had shown, and that earned her a lot of favor in defeat. Unfortunately things would take a turn when she was disqualified from the 2000 Ms. International, for the use of diuretics. Then that year’s Olympia saw her in fifth place, not exactly living up to her full potential.

That would all change in 2001 though, as Iris would get her first professional win, at the Ms. Olympia. Yet she was unable to hold onto it for very long, coming in second to Lenda Murray, both in 2002 and 2003. She would pick the Ms. Olympia title back up in 2004, but lost it to Yaxeni Oriquen-Garcia in 2005.

By 2006, Iris Kyle was forced to make a change to her physique. She got to work in the gym, fine tuning her body, before coming back at the 2006 Ms. International, getting the win that had eluded her for many years. Iris rode this momentum into the Ms. Olympia, getting her third victory, and starting an unbelievable run.

Starting from 2006, and continuing all the way through 2014, Iris Kyle would continuously alternate between winning the Ms. Olympia and the Ms. International. Year after year, she dominated the competition, with her only setback being an off performance at the 2008 Ms. International, where she placed 7th. Following her tenth Ms. Olympia victory, and seventeenth overall IFBB title in 2014, she would retire from bodybuilding, which would subsequently be the final year the Ms. Olympia was held.

That being said, it seems like both will be returning soon.

A Life Outside of Bodybuilding

While it is true that Iris Kyle holds the most consecutive Ms. Olympia wins of all time, she still somehow managed to have a life outside of the sport. In 2008 she would make an appearance on a special episode of Wipeout, but did not like the way she was treated while on the show. In addition to that, she made an appearance in Generation Iron 2.

As far as business ventures go, Kyle has been involved in training ever since she got the job back in the 90’s. Eventually she started her own nutritional line, Healthier by Choice, as well as promoting Visalus. In addition to that, she is the co-owner of a healthy cafe in Las Vegas, known as the Bodi Cafe. Nowadays, Iris finds herself working as a real estate agent.

For the most part, Iris Kyle has kept the details of her diet and training rather close to the vest over the years. However it is known that she liked to work around four or five days a week, keeping a well rounded balance of what she works on. This has allowed her to bring the sculpted physique that she took to the stage for two decades.

As far as her diet is concerned, Kyle likes to keep her protein levels rather high, with copious amounts of chicken and turkey. In addition to that, she keeps things strict, rarely ever having a cheat meal. As far as supplements go, she kept things fairly minimal, mainly sticking to protein shakes and vitamins.

What We Can Learn From Iris Kyle

The legacy of Iris Kyle is forever set in stone, just simply on the back of her accomplishments in the sport. However it was not something that came overnight for her. Not only did she have a slow start to her career, but even after she won the Ms. Olympia, she had to battle through setbacks. Her ability to overcome adversity demonstrated the championship mindset that she had throughout her career.

Although her career may not completely be finished yet, Kyle is the best female bodybuilder to ever grace the stage. She gets comparisons to the likes of Ronnie Coleman, but in all honesty her accomplishments even exceed that of the men’s legend. She is a true icon in the sport, and one of the best to ever do it, regardless of gender.