Dorian Yates was one of the best bodybuilders of the 1990s. Six-time winner of Mr. Olympia, Yates is often considered to be one of the most muscular men in bodybuilding history. In this article, we reveal how Yates trained to build his phenomenal physique. 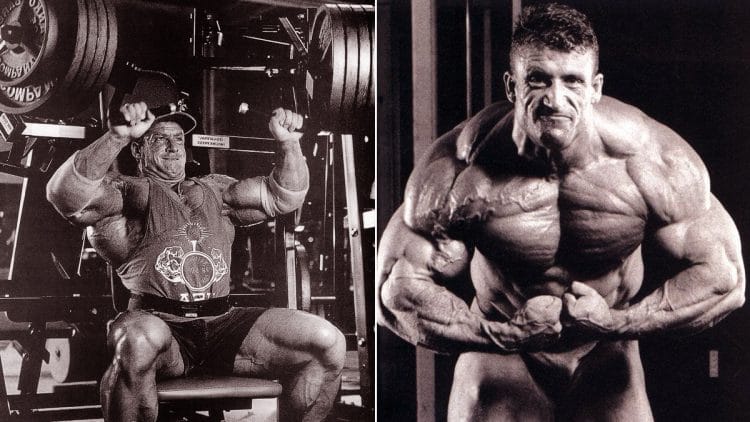 Bodybuilder Dorian Yates, nicknamed The Shadow, was one of the first truly successful “mass monsters” of competitive bodybuilding. He combined incredible size with unbelievable leanness to create a physique that won him six back-to-back Mr. Olympia titles during the 1990s.

Yates’ approach to training, which he called “blood and guts,” involved short but incredibly hard workouts and was inspired by the writings and philosophy of fellow bodybuilder Mike Mentzer.

Despite having retired from competition over 20 years ago, Dorian Yates is still in great shape and is still a stalwart of the bodybuilding scene. In this article, we reveal some of the workouts that The Shadow used to build his legendary physique.

Who is Dorian Yates?

Dorian Yates was born in 1962 in Stafford, England. However, Birmingham, the UK’s second-largest city, soon became his home. As a kid, Yates ran into trouble with the law and was sentenced to six months in a young offenders detention center – a sort of junior jail.

Quickly realizing the error of his ways, the young Shadow threw himself into exercise and started lifting weights. Realizing he had a lot of bodybuilding potential, he entered his first competition in 1984 and turned pro in 1990.

Dorian Yates was unbeatable in the 1990s and won six back-to-back Mr. Olympia titles from 1992 to 1997 when he retired undefeated. His professional record consists of 15 major contest wins and two second-place finishes. From 1992 to his retirement in 1997, he won every single contest he entered.

Yates’ competitive career came to an end because of a series of chronic and acute injuries, including torn biceps and triceps. The latter injury occurred just three weeks before the 1997 Mr. Olympia.

Although he won the title despite the injury, his victory was controversial as fans, critics, and fellow bodybuilders thought the runner-up Nasser El Sonbaty deserved the win.

Outside of bodybuilding, Dorian Yates owns Temple Gym in Birmingham, where he trained throughout his professional career. He also launched his own brand of supplements – DY Nutrition and produced several training DVDs and an autobiographical book and training guide. 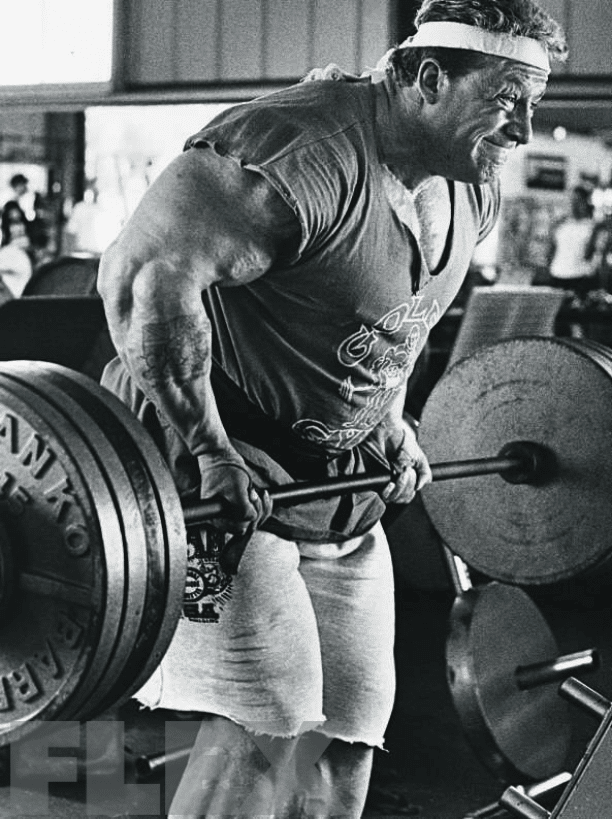 Like every bodybuilder who has ever lifted a dumbbell, Dorian Yates had many different workout routines and changed programs regularly to avoid boredom and maintain his progress.

After all, if you stick to the same schedule for too long, eventually, even the best workout will stop producing results.

However, The Shadow mostly favored an approach called High-Intensity Training (HIT) that was much shorter and far more intense than the average bodybuilding workout.

The basic premise of HIT is that it’s intensity and not volume that is responsible for increases in strength and muscle size. Once maximal exertion levels have been reached, any additional training above and beyond this point merely erodes away valuable recovery resources and delays progress.

This meant that Yates usually trained to failure and only did a couple of sets per exercise. Training to failure means different things to different people, but, as far as HIT is concerned, it means getting to a point where it is impossible to perform even one more rep.

Shorter workouts mean less time in the gym and more time for rest and recovery. While this approach may not work for everyone, it’s clear that it was perfect for six-time Mr. Olympia winner Dorian Yates.

A typical weekly training split for The Shadow looked something like this:

This meant every muscle group would be trained every six days instead of once a week. This is a small difference, but Yates believed that training each muscle every six days was optimal for recovery and growth.

Workout 2 – Back and rear deltoids 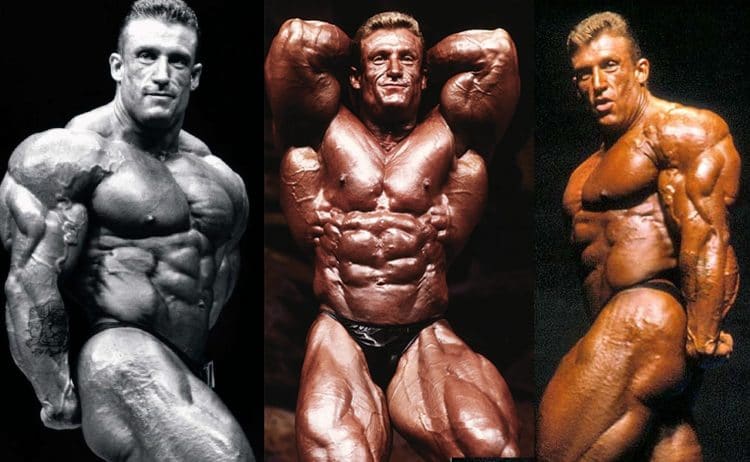 On paper, the Dorian Yates workout looks pretty straightforward. After all, how hard can doing 1-2 sets of an exercise actually be? But, don’t let the brevity of these workouts fool you; Yates’ blood and guts approach to training is a lot tougher than it sounds!

Here are a few tips from Dorian Yates on how to get the most from these workouts:

According to Yates, you can train hard, or you can train long, but you can’t do both. As such, he recommends taking each set to failure and then going beyond that point with a few partner-assisted forced reps or drop sets.

You are stronger eccentrically than you are concentrically. That means you can lower more weight than you can lift. Make the most of this phenomenon by lowering your weights more slowly than you raise them. This will create more microtrauma, which is one of the triggers for muscle growth.

3. Do multiple exercises per muscle group

Just because HIT is a low-volume training system doesn’t mean you can’t hit your muscles from multiple angles using a variety of exercises. Make sure you work your muscles from all the available directions by performing several different exercises per body part. The bigger the muscle group, the more variations you should use.

4. Record all your workouts in a logbook

Yates was a strong proponent of the training diary. Right before every workout, The Shadow opened his training log to look at his previous workout. He knew precisely what weights he lifted and how many reps he performed. His goal was to beat the logbook every single time that he trained. He could do this by adding weight to the bar or getting more reps.

If you consistently perform at the same level, you’ll never get bigger or stronger. Using a logbook makes your training more quantifiable, and you know exactly what you need to do to keep on making progress: and that’s more than last time!

5. Drop the squats if you want bigger legs

Somewhat controversially, Dorian Yates was NOT a fan of squats for bodybuilding. That’s probably because training to failure with squats is a risky undertaking. Also, like the Iron Guru Vince Gironda, Yates thought squats worked the glutes too much.

That’s not to say that squats are an ineffective exercise, as the legs of Tom Platz clearly prove, but it’s good to know there are other ways to build your legs apart from squats.

Dorian Yates was a big fan of a high-intensity training method called pre-exhaust, which involves doing an isolation exercise followed by a compound exercise for the same muscle group, e.g.:

Pre-exhaust allows you to train your muscles beyond their usual point of failure.

7. Train each body part more than once a week

Reducing the length of your workout and training to failure means that you should be able to recover faster between workouts. This means you can train more often, and more frequent workouts should produce faster results.

If you look at Yates’ training split, you’ll see that several muscles groups are trained twice per cycle, once directly and then again indirectly. Also, using a four workout, six-day training cycle, Yates trained his entire body five times a month instead of the more usual four.

Needless to say, this approach clearly worked for Dorian The Shadow Yates!

Should YOU Try the Dorian Yates Workout?

Dorian Yates’ HIT-style workout is ideal for anyone who doesn’t have a lot of time for training or who finds it hard to recover from longer workouts. Instead, it creates a nice balance between training and rest and leaves plenty of time for other activities, such as cardio, which Yates deems essential.

On the downside, training to failure is mentally and physically challenging, and can be a source of acute and chronic injury. It could be why Yates’ competitive career ended when it did.

However, in terms of training efficiency, Dorian Yates’ workout is hard to beat and definitely worth considering if you are looking for a new way to train.

Take a look at most top bodybuilders’ workouts, and you’ll see that they’re often very similar. It’s the same old 3-4 sets of 8-12 reps of 2-3 exercises per body part. There is nothing wrong with this approach, and it often works very well, but it’s not the only way to build muscle.

Dorian Yates started using High-Intensity Training very early in his lifting career and stuck with it for many years. He was a firm believer in hard but short workouts and training to failure.

If you’ve been following a traditional high-volume bodybuilding program for a while, and your progress is starting to stall, switching to a Yates’ inspired HIT workout could be just what you need to get you out of your current training rut.

And, judging by how good Dorian Yates still looks, it’s clear that, as training systems go, HIT should keep on producing great results for many years to come.

Jeff Nippard is one of the most popular fitness stars on social media. He has over 703K followers on Instagram...

The greatest of all-time debate has intrigued fans of nearly every individual and team sport. Bodybuilding is not an exception...

Different people have different reasons for joining a gym. While some individuals get a gym membership to lose weight, others...