As he prepares to film a Hulk Hogan biopic, Chris Hemsworth gets props from the WWE legend himself, over his massive arms 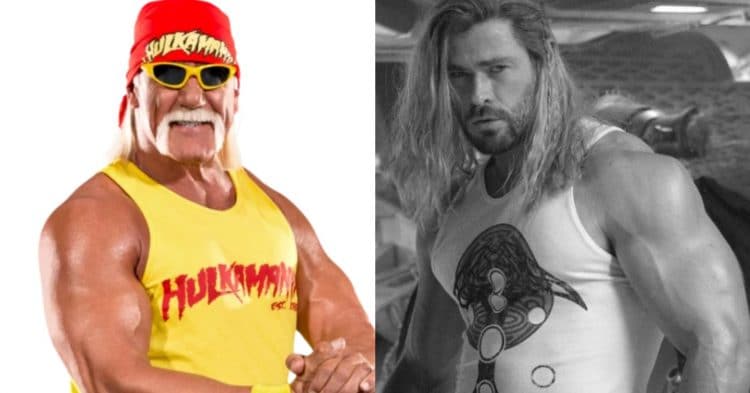 The God of Thunder himself, Chris Hemsworth is looking to take on the role of a peak Hulk Hogan for an upcoming biopic. Apparently his preparations are coming along well, as he has earned the respect of the wrestling legend himself.

Hemsworth is known for his role as Thor in the MCU, but he has appeared in numerous other action flicks on the big screen. This is has resulted in him finding a massive appreciation for fitness, developing a killer training regimen and incredible physique.

That is why it came as little surprise to see that the Australian actor was tapped to play the role of Hogan in a forthcoming biopic. While the two share very little in common in terms of physical appearance, Chris seemingly has the acting chops and incredible athleticism to pull off this once in a lifetime role.

Of course, playing a prime Hulk Hogan requires a type of physical conditioning that even Chris Hemsworth had to get used to. After all, it is not easy for anyone to bulk up to achieve “24-in python” status with their arms.

That being said, it seems that Chris is doing pretty well for himself so far. He recently uploaded a picture to his Instagram, as he concludes the filming of Thor: Love and Thunder, and he showed off his enormous biceps and triceps in a tank top that is barely keeping itself together.

“The film is gonna be bats—t crazy off the wall funny and might also pull a heart string or two. Lots of love, lots of thunder! Thank you to all the cast and crew who made this another incredible Marvel journey. Buckle in, get ready and see ya in cinemas!! “

This impressive looking picture got the attention of Hulk Hogan himself, who has been following the progress of Hemsworth as he bulks up to portray him. He cropped the photo to show how gigantic Chris’s arms are, posting it to his own Instagram and complimenting the actor.

“My brother has that Hogan Pump on Jack,looks like he could slam Andre brother HH,” the wrestler wrote.

At this time, little is known about the Hulk Hogan biopic starring Chris Hemsworth, other than the fact that it will be released on Netflix. However it is clear that Chris is taking this role seriously, and while we have not measured those arms, they could very well be 24 inches.

If you are after big arms, then you need to be working your triceps hard and often. Of the three...