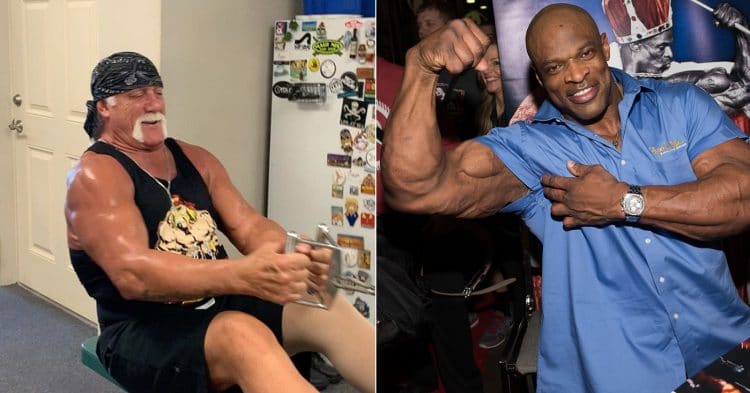 At age 66, Hulk Hogan is still in pretty solid shape. He recently shouted out bodybuilding legend Ronnie Coleman during a workout session, which caused a response that has gotten the bodybuilding community buzzing.

It is no secret that bodybuilding took a heavy toll on Ronnie Coleman’s body. Just recently he was on Joe Rogan’s podcast, talking about the extensive surgeries he has needed on his back, and hips. It is something that still causes issues to this day, but he is still able to persevere and train on a regular basis.

This resilience caught the attention of professional wrestling legend Hulk Hogan. Hogan is no stranger to training after surgeries himself, and he draws inspiration from Coleman’s toughness. He took to his Instagram recently to share a video of his workout, where he compliments the bodybuilding great.

“Oowee! Yeah buddy! Ron Coleman, you’re my hero brother. Reaching out dawg. Back surgery number ten brother. Both hips, both knees replaced. Oowee! Yeah buddy! Coming after you brother! Maybe we can team up, have a charity match, win the world titles together!”

This prompted a response from Coleman, who commented that the two could do a tag team match together.

Coleman then took it a step further by reposting the video Hulk Hogan shared. Here he commended the wrestler for being able to overcome so many surgeries. He, of all people, knows how difficult that is to do.

“YEAH BUDDY, Big shoutout to my boy @hulkhogan as we go through this recovery process together! 10 surgeries ain’t no joke but Champions always find a way back to the top 👑x👑
Next time I’m down in Florida we’ll have to get a workout in together.”

It would seem that Hulk Hogan and Ronnie Coleman could be the unlikely duo that nobody knew they wanted, but everybody needs. It would be wild to see them train, and especially wrestle together. Although it seems hard to believe that Ronnie could do that with his physical health being what it is.