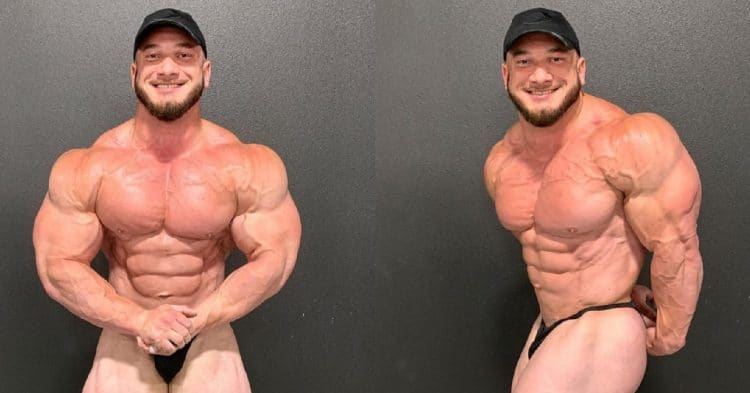 Make your pro bodybuilding debut can be a daunting task for anybody. However Hunter Labrada looks prepared for the task, six weeks out from his first contest.

28-year old Labrada was born in Texas, as the son of IFBB Pro Hall of Famer Lee Labrada. Those incredible genetics would show themselves almost as soon as Hunter decided he wanted to pursue bodybuilding as a full time career. He won every single one of his amateur shows, including the 2018 NPC Nationals, where he would earn his IFBB Pro Card.

Fast forward two years, and Hunter Labrada is set to make his pro debut, at the 2020 Tampa Pro. Six weeks out from that contest, he took to his Instagram to show off his physique, and detail what his training has been like. Judging by the way he looks, it would not be a far stretch to say he appears to have the makings of a future champion.

” 6 weeks out! This last week the “blood in the water” feeling I always get on prep hit full force. Not that things aren’t always serious, but the focus is on a whole different level right now. I very much know and appreciate the fact that every day is an opportunity to get better, and if I don’t, someone who will be standing next to me did👊🏻 All about winning every individual day from here on out💪🏻
–
–
262 fasted, 266 post training. That’s the same as I was a week ago, and we definitely got visibly better, so still growing into the show😎
–
–
Training: starting to get close enough and low enough in body fat that im starting to try and be smart about what I do when I’m in the gym. While my muscle recovery is still adequate (not sore or fatigued feeling when it’s time to train), I feel like my CNS was a little fried. Might have something to do with rack pulling and squatting every week🤷🏻‍♂️ so, to be conscious of this, I made a couple modifications: I pulled the weighted dips out on push day, I replaced banded rack pulls with snatch grip hyperextensions, and tomorrow’s leg day will be heavy on isolateral exercises and lengthened tempo on the negatives for the compound movements. –
–
Nutrition: Finally changed something😅🤣!!! So we were eating 4 high and then 1 low, and we have moved to 2 high, 1 low, 1 high, 1 low as of last Friday. We did this to keep the food high on my push, pull, and leg days, and go low on the arms and rest/recovery day when the caloric/energy demand is lower. @andrew_vu87 initially wanted to move to just 3 high 1 low, but with how well training is going right now I wanted to prioritize keeping the sessions intense, while maximizing the fat burn on the off and arm days, so I suggested doing it based [email protected] training split and he was cool with it! Gotta have something to show for working together for
3+ years!
–
–
Cardio: still at 30 min steady state every day but leg day! Every session I do right after training and posing a couple rounds, and keep my heart rate between 145 and 155 BPM. (Copied and pasted from last week cause nothing’s changed🤷🏻‍♂️)”

It would definitely seem that Hunter is taking a clinical and scientific approach to his diet and training, planning things out thoroughly. He is clearly influenced by his father, but he looks like he could easily carve his own career path full of success. It all starts with the Tampa Pro, and that professional debut.

What do you think of how Hunter Labrada looks? Does he have what it takes to be a future bodybuilding champion?