Life and accomplishments of Hunter Labrada 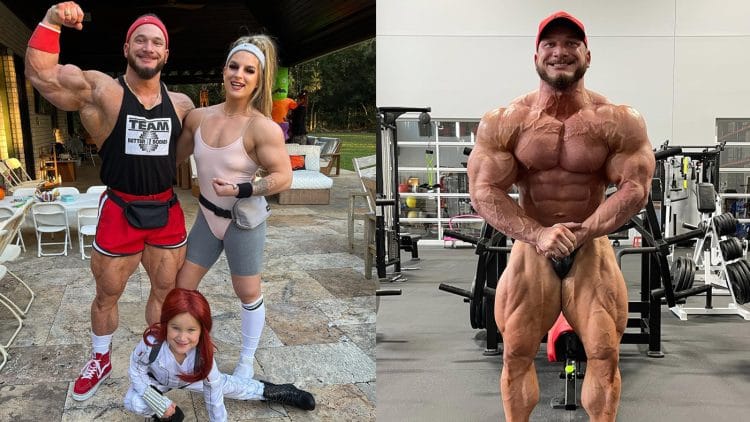 Hunter Labrada is an IFBB Professional bodybuilder and businessman from the United States. His father is bodybuilding legend Lee Labrada. This is his complete profile, biography, training regime, diet plan, and more. 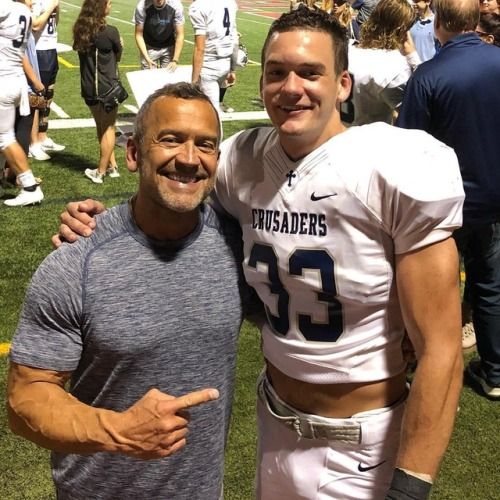 Hunter Labrada is from Texas, USA.

His journey has been much different than that of most Pro bodybuilders, growing up with two parents who also competed. His father is the legendary Lee Labrada, who is one of the greatest Open division bodybuilders of all time. Lee won Mr. Universe in 1985, placed top 4 seven consecutive times at the Olympia and in 2004, was inducted into the IFBB Pro Bodybuilding Hall of Fame.

His mother, Robin Labrada, also competed and has been by Hunter’s side during his bodybuilding journey. She also has a pretty good eye for bodybuilding and Hunter has said her opinion is just as valuable as his father’s.

Football and deciding to pursue bodybuilding 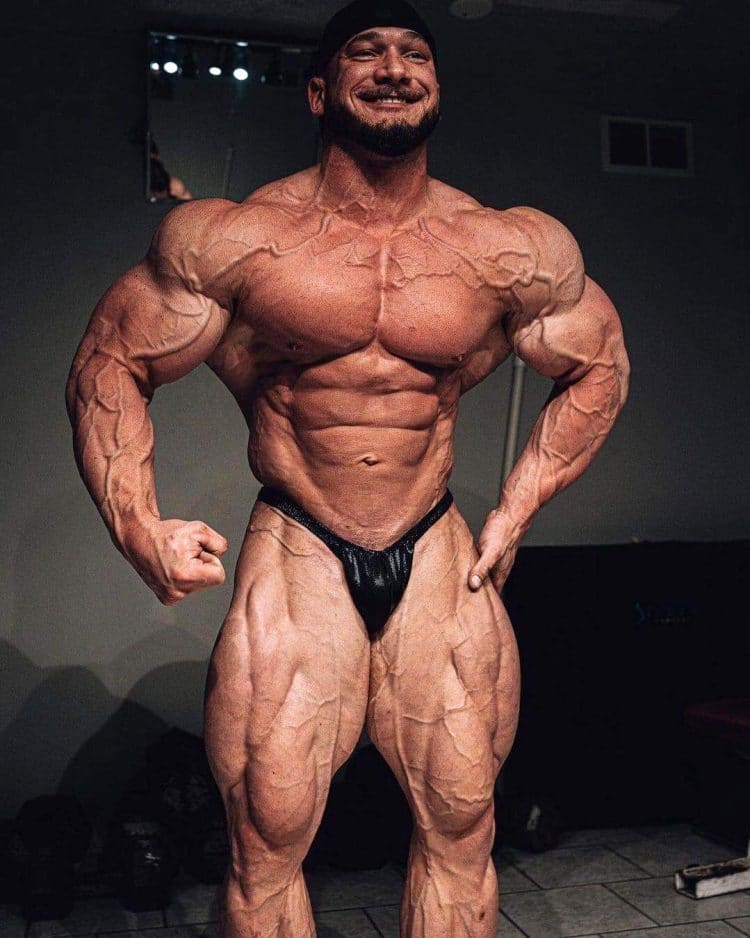 As a young teenager, he developed an interest in football, playing in middle school and realizing he was pretty good at the sport in high school, earning many accolades along the way. He even had plans to make a career out of it. However, we all know that life doesn’t always turn out the way we thought it would. Hunter started to really take an interest in the sport of bodybuilding at the age of 18-19 and decided that he wanted to follow in the footsteps of his father.

By age 21, he really started to have an appreciation for what his father was able to accomplish as a competitive Pro bodybuilder, and realizes it more and more as he climbs the Open division ladder.

But Lee was not happy about his son’s decision as he wanted Hunter to play football instead of pursuing a bodybuilding career because the young athlete had invested so much into the sport for years.

However, Hunter insisted that he focus on bodybuilding because he saw a future in it, especially having an advantage with his father being who he was. Not to mention, he had already incurred many injuries such as concussions and fractures and was not sure he’d be able to eventually pursue bodybuilding if continued to play football.

So Lee had to accept that his son wanted to compete in the sport and had no choice but to guide him to ensure things were done the right way. Consequently, he made smart decisions, starting out small with local shows and moving his way up which was undoubtedly good for his confidence and ultimately his career even up until this point.

Lee’s influence and seeking outside help

Lee has played a big role in his son’s success, being a mentor and second set of eyes, and being one of the greatest posers of all time, he’s really been able to help Hunter in this area. However, Lee Labrada competed in a different era and not to mention, he was smaller in height and significantly smaller in size compared to Hunter.

While Lee initially insisted that he coach his son, Hunter felt he could benefit from outside help because what he would be going up against would be a whole different animal. And while Hunter has worked with his coach Brian, he’s also learned how to make improvements himself.

Ultimately, Hunter wants to do better than his father and win an Olympia title. 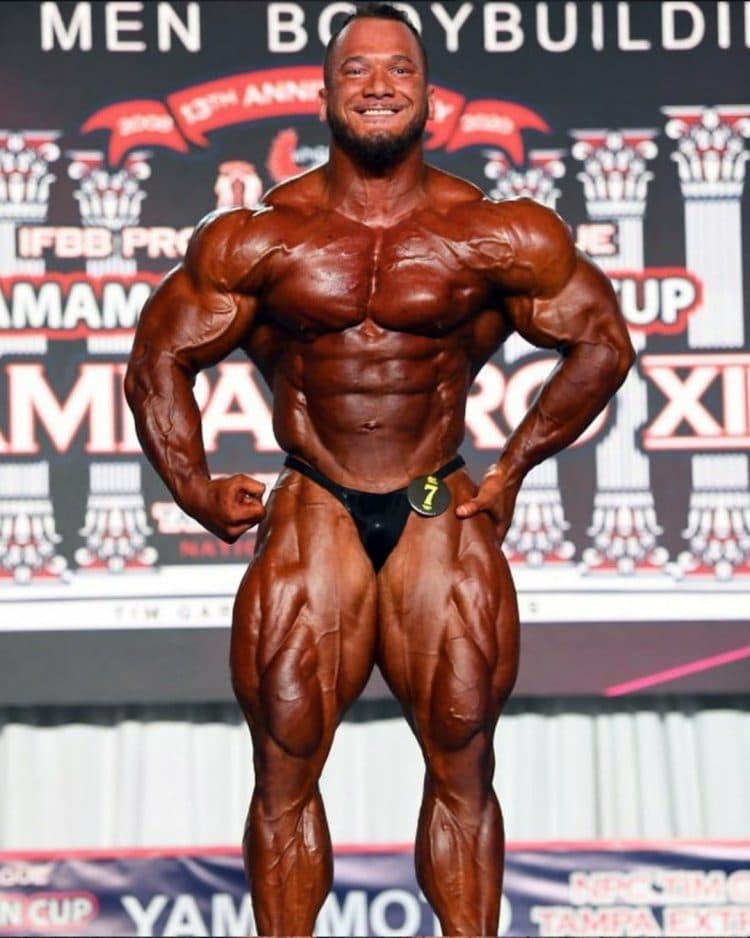 Hunter has certainly lived up to the hype, quickly climbing the Open division ladder. He dominated several contests prior to earning his Pro Card at the 2018 NPC National Championships. Since turning Pro, he’s won two major shows – the 2020 IFBB Tampa Pro and 2021 IFBB Chicago Pro.

In his Olympia 2020 debut, Hunter took eighth place which was definitely not the result he was hoping for.

The very next year, he managed to shock the bodybuilding world and improve his Olympia placing by 4 spots, earning him a 4th place finish at the most prestigious show in the world.

He was neck and neck with rookie Nick Walker who won the 2021 Arnold Classic just weeks prior, but managed  to edge him out by one spot.

Related: Nick Walker Says He ‘Was More Complete’ Than Hunter Labrada, Not Competing Until 2022 Olympia

Hunter has said that he plans to retire by age 35 if he’s not the champion or anywhere to it.

In an interview with former Pro bodybuilder Dennis James, Hunter explained that he was able to make such big improvements with his physique in such a short amount of time because he fixed his messed up shoulder that resulted from an injury playing football.

He was tackled from behind while holding the football and landed on his arm which broke his arm and dislocated his shoulder. So he went for a long time with this shoulder problem that he never took care of not realizing how bad it really was. 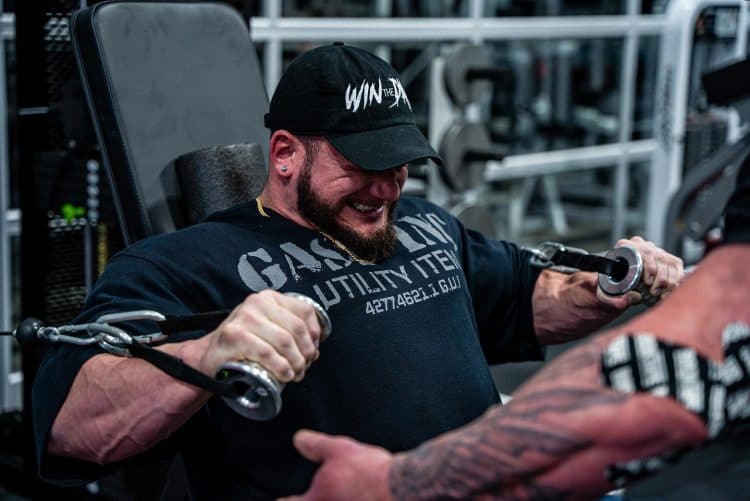 Hunter is committed to his craft having not taken much of a break in two years since having his shoulder fixed. Although, after the 2021 Olympia, he took it easy to recover both mentally and physically.

Regarding his workout regime or strategy, Hunter likes to keep things simple. He does not believe in muscle confusion either which is based on the idea that changing up workout variables frequently “confuses” the muscles, preventing plateaus and resulting in consistent muscle gains.

While he trains to compete as a bodybuilder, working out is more than just building big muscles for him. It’s like a drug he explained in an interview.

“That feeling is what I live for. It’s like a drug honestly, and it’s legal. It’s free therapy, lucky me, right?”. “That’s what I love about bodybuilding, is those top heavy compound sets, really pushing the envelope. I’m getting a little emotional honestly, talking about it right now, but just the fact that no matter what’s going on outside of the gym, no matter what’s going on in your life, no matter.

Fourty-five pounds is always fourty-five f—ing pounds. So it’s nice to be able to walk in somewhere and it just be you vs something that you have done before. It’s simply are you going to be better than you were last time or not? That’s a feeling I have grown to live for.”

Below we’ve included one of his recent workout splits that was shared in 2021 during his Chicago Pro prep. 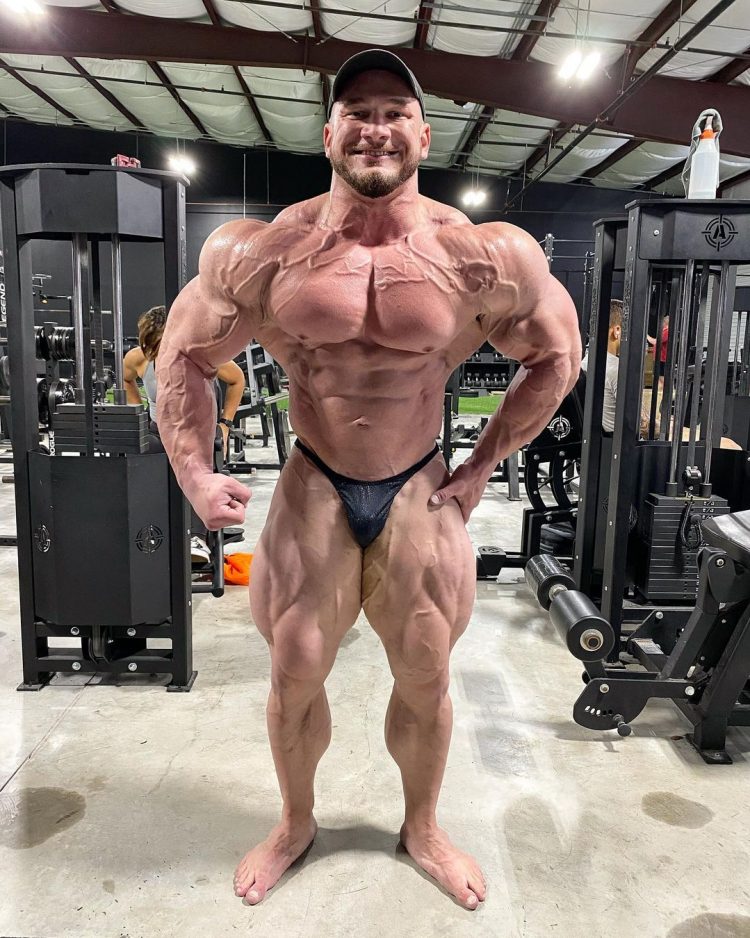 Like any bodybuilder, Hunter has a specific diet regime that he follows and it varies based on what he’s trying to achieve. Below we’ve detailed a full day of eating for one of the best bodybuilders in the world.

“Screw motivation, learn to love discipline. Motivation is very fleeting, if you rely on some song or some YouTube video or having a really awesome day to be the catalyst for you to handle your business, you’re not going to be successful.” 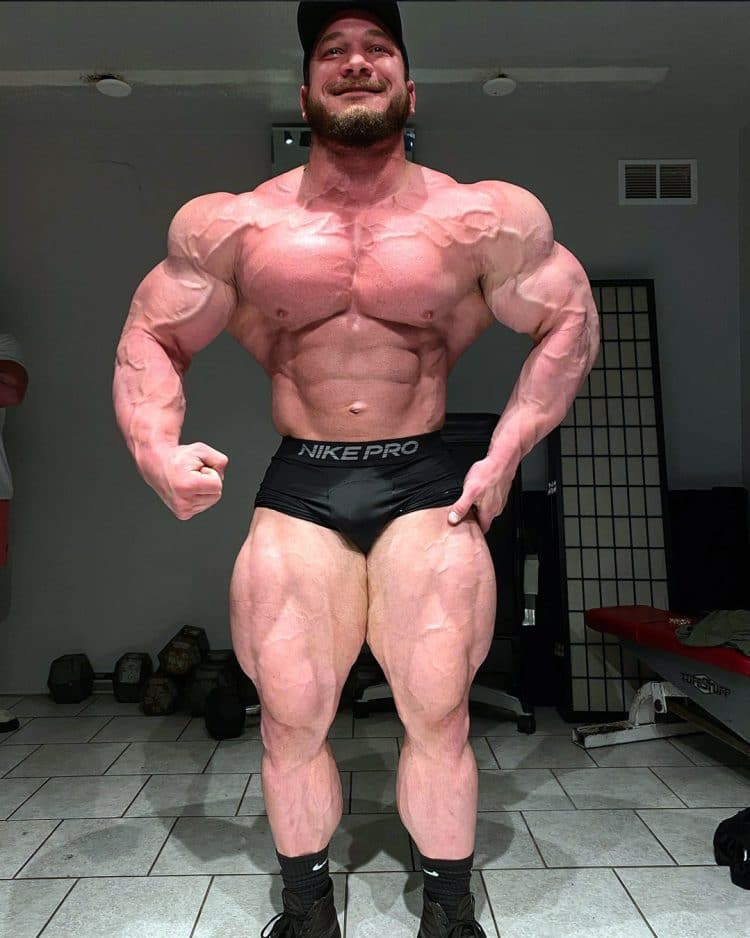 During an interview with his father Lee, Hunter discussed his supplement choices.

They first talked about products used around the “workout window” such as pre-workout and something for after each session. “The sole purpose of a pre-workout is not to make you feel like you need to be scraped off of the ceiling because you’re so stimulated,” he explained. “That’s not a good thing“. That’s because using lots of stimulants can place the body under a lot of stress.

Hunter prefers options with minimal or no stimulants as he feels they do not help with performance after a certain point.

He also uses an intra-workout supplement to replace electrolytes and glycogen, but doesn’t want something that’s going to sit in his stomach like a brick and allows him to train hard.

Then for post-workout, his supplement of choice replenishes what he lost during the session but it also helps to start rebuilding muscle tissue since training breaks them down.

Check out our large selection of post-workout protein powder reviews. 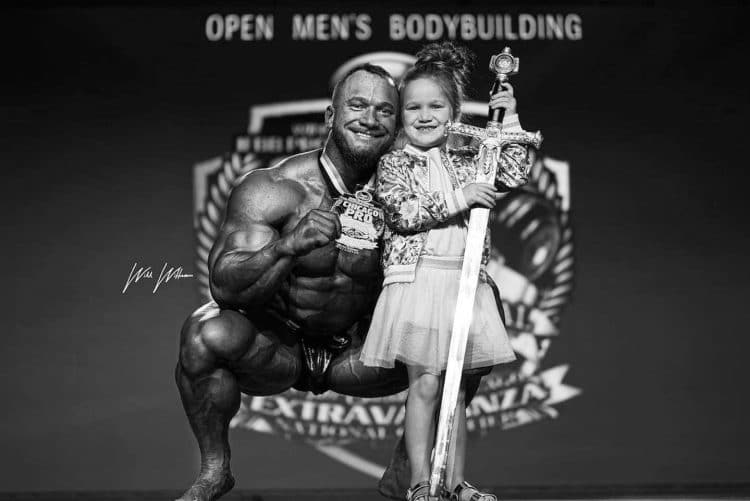 Hunter is currently in a relationship with IFBB professional competitor Liv Roth. He does have a daughter with former girlfriend Katie Hutson of which the two have a daughter together who they named Brooklyn Kathleen Labrada.

Hunter and his father run the popular supplement company Labrada Nutrition of which Lee founded in 1995. It’s become one of the most widely-recognized sports supplement brands in the industry.

He has 282k followers on Instagram and recently started a YouTube channel at the end of 2021. Although he’s only posted two videos so far, but hopefully we can expect to see more of his content in the near future.

Hunter Labrada came from bodybuilding royalty but that doesn’t mean it’s been easy for him. Fortunately, though, he does have a bodybuilding legend to guide and help him along the way. The young competitor has certainly lived up to the hype, earning a very impressive fourth place finish after the 2021 Mr. Olympia, just four year after turning Pro and one year following an eighth-place finish at the Olympia competition.

We’re looking forward to seeing what he brings to stage this year and he’s going to certainly be one to watch on that Olympia stage.

Strong arms are a prerequisite for performing almost every upper body movement. The triceps come into play every time you...

With this year's Olympia contest taking place in less than 13 weeks, bodybuilding veteran Samir Bannout gave his thoughts on...

Bodybuilders Brett Wilkin and Hunter Labrada compete in the Open division of the IFBB Pro league and are considered among the best bodybuilders...