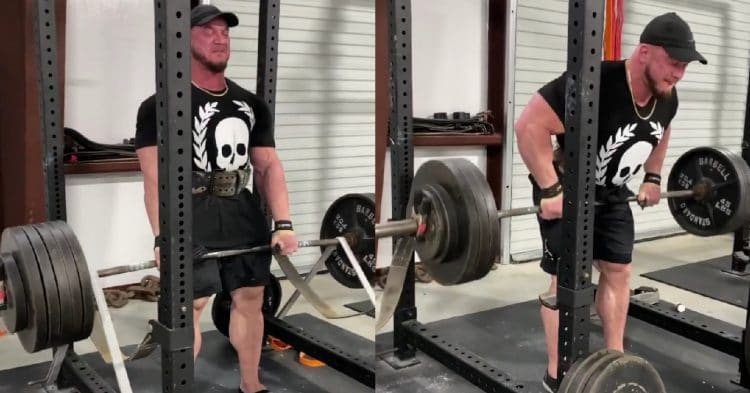 Bodybuilding prospect Hunter Labrada has been packing on the pounds recently as a result of some hard training. This muscle increase has led him to some pretty intense training sessions and a couple of new personal records.

The last several months have seen an uptick in the training and growth of Hunter, in ways that he previously had not shown. He has spoken openly about his desire to break away from the shadow of his father, the legendary Lee Labrada, and so far he has done pretty well with that. When he made his pro debut earlier this year it was clear to see that he had similar features to his father, but the differences were clear. He has an ultra jacked physique already, and is only getting better.

Currently Hunter Labrada is in prep for the 2020 Mr. Olympia, where he will take the stage with some of the best bodybuilders in the world today. To get ready for such a massive opportunity, he has naturally been hard at work in the gym, packing on the muscle mass and improving on the weak areas of his physique. As a result of this hard work, he was able to hit a pair of new personal records in a recent training session. The videos, which he posted to Instagram, show him going five reps of a 545lb rack pull, using 220lb of resistance with bands, as well as a whopping eleven reps of a 385lb barbell row.

“Another pull day, another 2 pr’s in the book😈

This is what I love about bodybuilding. Then never ending process of setting your standard, and then beating it. Very few feelings are more satisfactory than knowing you’re better than last time👊🏻”

These are some pretty intense rep PRs for Hunter to hit in this session. This was clearly a hard working day of pulling, and he hit some big numbers. The results of these hard training days is written all over his physique too, as his updates have seen a ton of improvements since the last time he was seen on stage. In this most recent update he showed off his form, while also sharing his diet plan for the day.

Hunter Labrada is definitely one of the sneaky good athletes who will be competing at this year’s Olympia. It is going to be interesting to see how he looks in the biggest test of his career. Although if this work recently has been any indication, he will likely look pretty solid.

Brandon Curry Shows Shredded Back Ten Weeks From The Olympia