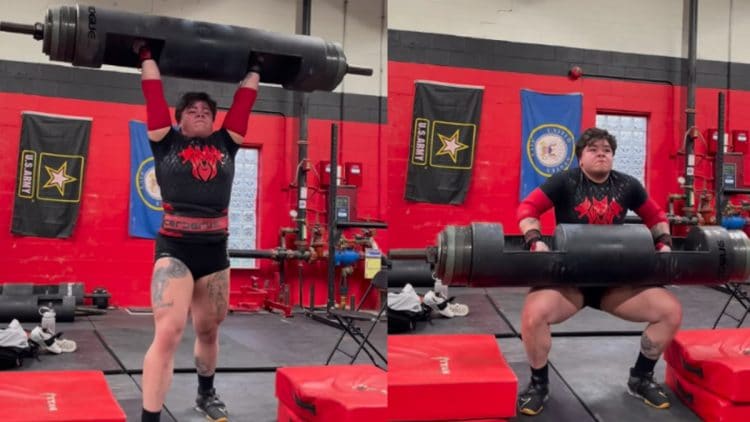 Inez Carrasquillo is an elite Strongwoman athlete, but her incredible static strength is what attracted the public’s eye. Inez is mostly known for her log lift prowess and after unofficially becoming the first Strongwoman to log clean & press 300 lbs back in February of this year, she is now lifting even more. On April 25th, 2022, Inez Carrasquillo shared a massive 315 lbs (142.9 kg) log clean & press on her Instagram account.

Inez Carrasquillo used a lifting belt, knee sleeves, wrist wraps, and elbow sleeves to aid her in the lift. Inez had an invitation for the 2022 Clash on the Coast Record Breakers, which took place on February 22nd. This would have been the perfect opportunity for her to make the record official, but she did not attend the competition. Inez states,

Inez Carrasquillo At A Glance

The Puerto Rican representative, Inez Carrasquillo, has started Strongwoman relatively recently. However, she does not lack success in official competitions. Inez Carrasquillo’s debut competition was the 2021 World Strongest Woman contest, where she finished in fourth place. She had two more competitions in 2022 and won both of them. Inez came out victorious in the 2022 Arnold Amateur Strongwoman World Championships and the 2022 Beerstone.

Inez Carrasquillo’s early success in the sport of Strongwoman was largely due to her previous experience in powerlifting. She took part in three sanctioned powerlifting competitions in 2019 & 2020. Inez managed to claim all three wins in the 90+ kg weight class and also set impressive PRs.

All of her competition PRs came in the 2020 USPA Power Surge Pro/Am IV.

It is not clear if Inez Carrasquillo will attempt to break the world record in the near future, but she will only get better with time. When Inez does plans to compete again, there is no doubt that she will dominate the field and crush the Strongwoman World Record. Judging by her recent posts, it is only a matter of margin by which Inez will beat the current record.