Johnnie Jackson speaks on deaths in bodybuilding with Dennis James: "We are human. We are vulnerable". 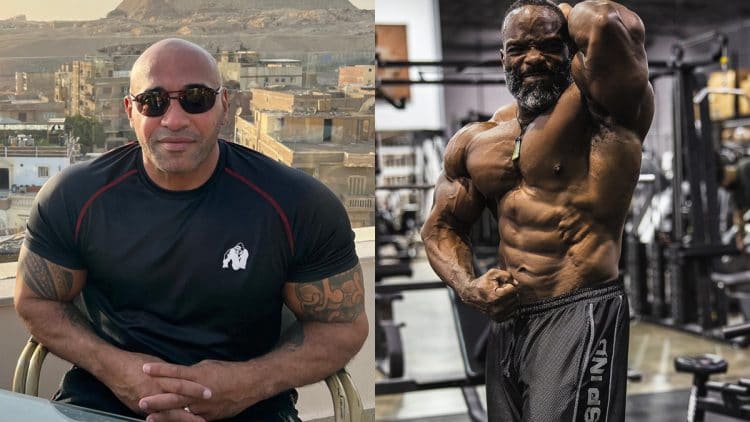 Johnnie Jackson made a name for himself in powerlifting and bodybuilding courtesy of his next level strength. Joining Dennis James in an interview, the two discussed dangers in the sport and whether or not Masters Olympia is on Jackson’s schedule next year.

A perennial contender in the IFBB Pro League, Johnnie Jackson is well known for his incredible strength and willingness to compete against anyone. During his lengthy career, the Men’s Open standout has competed in around a total of eighty Pro shows, a feat which is rarely replicated among modern bodybuilders. Johnnie’s last two Pro shows came in 2020 where he started off the season in 13th place at the 2020 Arnold Classic. Following the Arnold, Jackson took his physique to the 2020 Chicago Pro where he placed in 14th.

Meanwhile, Dennis James retired after he came back to the sport for Masters Olympia in 2012. He placed in third, behind Toney Freeman in second, and 2008 Mr. Olympia Dexter Jackson in first. With the rising number of deaths in bodybuilding, like the recent passing of the late Cedric McMillan, it appears Dennis is happy he made the decision to step away a decade ago.

Dennis James talks Bodybuilding Exit with Johnnie Jackson: ‘I’m Glad I Got The Fuc* Out’

Sitting down with Johnnie Jackson in an interview, Dennis James explained his decision to step away from the sport. Once he realized his career trajectory was going backwards, he knew that was a signal to stop competing.

“I’m going to be 56 (years old) next month. This is me. I talk about myself now. When I see all this stuff happening, I’m telling myself, ‘you know what, I’m kind of glad I got the fuc* out’. By the time I got the fuc* out ten or twelve years ago, because at the end of the day, there’s a lot of people… I don’t want to say anything wrong but there’s a lot of people doing stuff, doing certain things.

You know, I was just realistic to myself. Back in 2010 or 2009, I realized, listen, I’m at a point now where I’m not getting better, so now it’s going backwards. It doesn’t matter what you do. That was when I told myself that this was the time to leave. This was the time to stop and move on and do something else. But some people just don’t get that I think. Some people believe they still got it, it doesn’t matter how old they are and I think that’s a mistake.” Dennis James said.

Deaths in the sport continue to pile up as female bodybuilder Stacey Cummings tragically passed away last week at just 31 years old for unknown reasons. Jackson and Dennis are concerned about the current state of the sport.

‘You’re absolutely right man with all of the stuff that happened and of course, god bless the dead, Cedric man… oh my. Just crazy man. It definitely makes you take a step back and think, you know what I mean. It makes you realize we are human. We are vulnerable to whatever happens at any moment but also just like I taught my kids, I have to do the same thing because if I don’t then it doesn’t mean nothing.

What I told them doesn’t mean nothing. I’m losing my train of thought thinking about because I have so much going in my head right now. I’m so heart broken over Cedric too. I’m not trying to be dumb about things but you can’t let what happened out there predict what you do. I teach my kids to never let anybody predict with your emotions.” Johnnie said.

The popular podcast host made it apparent that he believes Johnnie Jackson would be the perfect fit for Masters Olympia, should it return in 2023.

“In your defense, in your case, are you still training, you’re still big, I mean absolutely, you just competed like a year ago, and why not do the Masters in your case? I get that. I’m not doing the Open because I have no business competing against the young guys anymore.” Dennis said.

While Johnnie expressed interest in potentially competing at Masters Olympia, he maintains that returning to Men’s Open is out of the question. Carrying excessive weight isn’t something Jackson is interested in at this point in his career, given the current atmosphere in bodybuilding.

“Yeah, because I would have to do some stupid shi* that I don’t want to do anymore to be that size.” Johnnie responded.

“You’re perfect for the Masters because that’s what you are. You’re a master, you’re a legend, and you’ve been in this sport forever. We don’t even have any information on the Masters. We don’t know when.” Dennis said.

According to Johnnie, he reached out to Dan Solomon and contacted the IFBB offices to gather more information about the contest but to no avail.

Earlier this year, Dennis and Jake Wood discussed Masters Olympia. Wood mentioned that tentative plans were for the show to return ‘definitely by 2023‘. In addition, Dennis shared that he has yet to discover what the prize money would be for the event or the targeted location. He caps off the discussion by revealing the show will more than likely not take place in North America.

“Yeah, she doesn’t know. I had Jake (Wood) on the podcast, the Olympia owner and I asked him about the Masters. He said, yeah it’s in his thoughts, he wants to plan it. It might be too early for 2022 but he’s thinking maybe in 2023 and potentially, this is not 100% but this would maybe be in conjunction with the show in Romania. So it might not be in the U.S. Which is another thing, people get to travel and compete at the Masters. We have no idea about the prize money, none of that.” Dennis revealed.

Johnnie Shoots Down Branch Warren Competing at Masters Olympia in 2023

When asked about whether or not Branch Warren would be interested in Masters Olympia, Johnnie mentioned that at first glance Branch seemed interested, but after he was asked about the topic in public, Warren poured cold water on the idea of competing again.

“No. No. He ain’t going to no Masters. I’m saying this. I first found out about it and I called him. He was the first one I called. He was like, ‘get out of here’, I didn’t expect this but he started talking like he was going to do it. I told him, I heard about it, it would be in 2023. He was like ‘oh man, you got me thinking right now’. I was like what, I didn’t know response and him being interested in competing. He was like, ‘man I got a lot of stuff going through my head, you know we would train together for it.” Johnnie said.

“We were talking about training together to get ready for the Masters. We actually had a conversation; I can’t think of everything we were saying towards us planning to train once we find out that the Masters Olympia was going to happen. I was like what, but it was a conversation between me and him on the phone. I got off the phone, and I was like ‘what the hell was that?’. Then, we had a conversation in front of people and said ‘nah, no’. I don’t think so. I don’t think he would. He would definitely train with me. He said time and time again that if I do it, he would definitely train with me to prepare for it but I don’t think he will get on stage. He’s got so much going on, that man has so much going on. I can’t even see where he would have the time to do it to tell you the truth.”

As it stands, Johnnie believes even if Branch Warren wanted to compete, he doesn’t currently have the extra time to adequately train for the event. Johnnie is keeping his options open but has no plans of returning to the Men’s Open division.

Even though Johnnie has stepped away from Pro competitions lately, he would be a prime candidate for Masters Olympia in 2023 as Dennis suggested. If a 2023 Masters Olympia comes to fruition, Jackson believes Branch would help him train for the potential event.