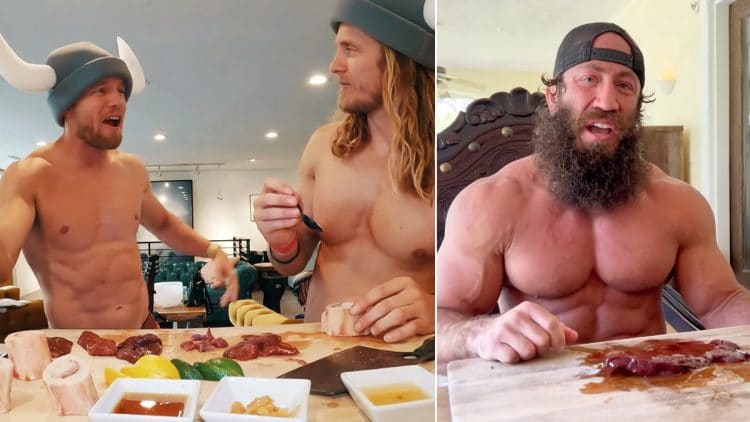 A fitness and comedy duo named Buttery Bros are known for trying out different diets and lifestyles in an effort to better their daily lives while having a little fun. In a recent YouTube video, Heber Cannon and Marston Sawyers fulfill the 9 tenets of ancestral living inspired by the latest social media sensation Liver King.

There was a time in history when the hunter-gatherer mentality was consequential to survival. Meals required men and women to hunt for animals in the wild and before the fire was discovered, raw meat was consumed by our forefathers. While civilization has continued to evolve, some maintain that living like our ancestors, or like Brian Johnson AKA Liver King is the best and healthiest way to enjoy life.

Liver King became a social media phenomenon courtesy of his outlandish personality, ripped physique, and willingness to spread information about the 9 tenets of ancestral living. He routinely shares unconventional workouts and provides fans with explanations as to why he lives the way he does. Maintaining a carnivore-based diet, Liver King has become the center of the timeless ‘natty or not‘ debate. Staying away from processed foods is another important aspect to the lifestyle, and the Buttery Bros plan on practicing each and every tenet to get the most out of their new way of living.

Buttery Bros begin with the second tenet, ‘eat’, and kick off their day in the life as Liver King by eating raw bison liver, raw bison heart, and raw bison bone marrow. After making sure it’s approved by Liver King, Heber and Marston add a little salt to the uncooked delicacies. Equipped with Viking helmets, the duo dip their liver in maple syrup and proceed to eat the meal while trying not to vomit. Liver King promotes these types of protein sources and opposes processed food.

“You can basically take away any vegetable, any meat, any vitamin supplement that you could of ever take and replace it with liver, you’ll be fine. It’s loaded up with vitamin B, vitamin D all of your vitamins. You want to get in about an ounce.” Erin Blevens said.

After eating a meal of raw meat, the Buttery Bros move on to ‘connect’ and step outside. While practicing the fifth tenet of ancestral living, the goal is to touch the earth barefoot for at least ten minutes daily.  By doing this, anxiety is relieved, and sleep is supposedly improved. In addition, it can also be a great tool for dealing with electromagnetic frequencies (EMFs) that may be affecting one’s physiology.

Butter Bros move to the fourth tenet next called, ‘shield’. According to King, this tenet involved training, specifically, the famer’s walk/carry. After the YouTube duo warm up their forearms, they loosen their quads with foam rollers and then begin shoulder mobility exercises. In addition, the pair managed to fulfill the ‘move’ tenet as well given their physical activity.

While most of it seems humorous, the Buttery Bros insist that they are implementing these tenets to learn from different people in the fitness sector. Moving on, the YouTube duo switch to the seventh tenet, ‘sun’ by working outdoors with a weighted backpack, and 45 lb dumbbells in each hand. The two make the most of the workout and achieve the eighth tenet in the process, ‘fight’. ‘Fight’ is thought to be achieved by pushing through pain and struggle from being in ‘harm’s way’.

The pair proceed by having ice cream cones together, and ‘bond’ as part of the ninth tenet. Then, the Butter Bros plunge into a chilling ice bath to fufill the ‘cold’ tenet. Before finishing the video, Heber and Marstin emphasize that they will complete the last and final tenet, ‘sleep’ when they get home and go to bed.

The experience taught the Buttery Bros that living an ancestral way of life takes commitment and perseverance. After living a mile in Liver King’s shoes, it’s safe to say the Buttery Bros have a newfound appreciation for the type of lifestyle Brian Johnson leads.