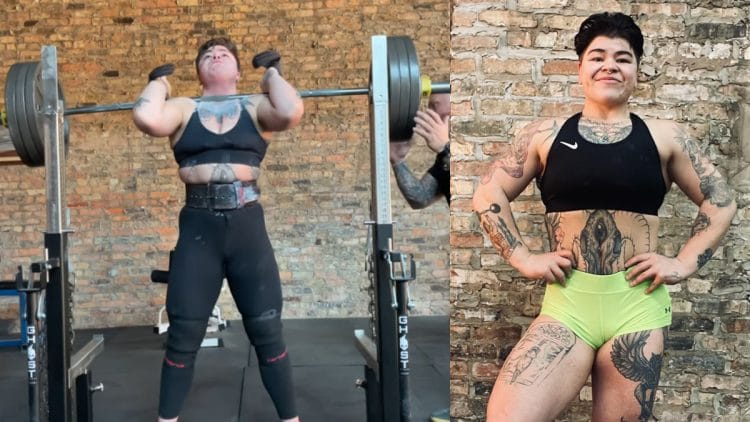 Elite Strongwoman athlete Inez Carrasquillo is lifting extremely heavy with two weeks left until the 2022 Arnold Sports Festival, featuring a Pro Strongwoman competition. Inez is relatively new to the sport of Strongwoman but has some history in powerlifting. On February 19th, she displayed her new front squat PR on her Instagram account, which shows the carryover from powerlifting.

Inez is known as a static powerhouse, and with this squat, she proved why. She front squatted 350 lbs (158.8 kg) + 60 lbs (27.2 kg) added in chains. Inez used a lifting belt, knee sleeves, and wrist straps, which are all allowed in Strongwoman, to aid her in the lift. The wrist straps enabled her to position the bar easily and squat comfortably. Inez described this lift as a Huge PR.

Inez Carrasquillo has accumulated some great success in a short amount of time. Her Strongwoman career has just begun, but she managed to get the invitation for the 2022 Arnold’s after just 3 months in the sport.

Inez is very successful, having unofficially broken a few World Records. She was the first woman to do a log clean and press 300 lbs (136 kg), which is the heaviest press from the floor done by a Strongwoman. However, Inez does not officially hold the log world record, as it was not done in competition. Andrea Thompson holds the record, and she set it on July 4, 2020, as a part of World Ultimate Strongman’s “Feats of Strength” series. She log pressed and cleaned 297.5 lbs.

Inez is definitely one of the biggest prospects in Strongwoman, which she regularly proves in training. She competed in the 2021 World’s Strongest Woman competition. Her WSW debut was very successful, having finished in 4th place, trailing the first place by only 3.5 points. Inez is representing Puerto Rico, and if she gets a win in the future, she will become the first Latina to come out victorious in the WSW. Inez also took part in the 2021 Official Strongman Games, and finished in third place.

Inez is full of self-confidence ahead of the 2022 Arnold Sports Festival, and hitting a new PR on the front squat, which is one of her favorite exercises, will make it even better. Depending on how she takes the last two weeks of her prep, Inez could be a favorite for the win.