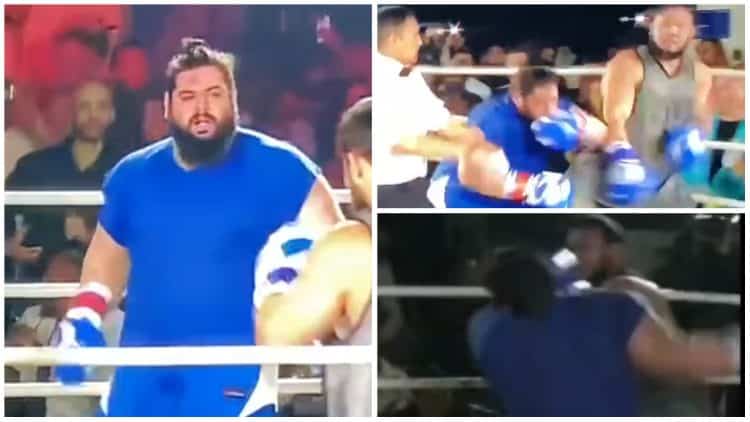 Iranian Hulk has issued an apology to the people of Iran after his loss to Kazakh Titan in a boxing fight.

Sajad Gharibi, popularly known as the Iranian Hulk, took to the ring for the first time. The novice boxer looked out of shape and lacked any technical skills that a professional would possess. He was clipped in the first two minutes of the headlining bout of Wicked N’Bad’s white-collar boxing show in Dubai on Sunday night.

Hulk kept turning his back on his opponent, a mistake often made by those who don’t train in combat sports before crashing down to the mat causing the referee to call an end to the contest.

On the other hand, Titan, whose real name is Djumanov Almat Bakhytovich, celebrated his win following a long-drawn dispute with Hulk. The two started feuding on social media when Hulk’s fight with British strongman Martyn Ford was canceled on short notice.

Iranian hulk comes out like a champ! With Muharram tunes! Ya Hossein! pic.twitter.com/qODHEjLvYX

In a brief interview after the defeat, Hulk issued an apology for the lackluster performance.

“I have nothing to say but I am ashamed and I apologise to the Iranian people.”

His coach shared a more detailed explanation, claiming the heavyweight only had two weeks to train.

“Thank you for your good and bad messages,” he said (ht Mirror). “I just wanted to five a brief explanation about the fight. The fight was set before Sajad came to me and he signed the contract. There was no way to cancel it unless he paid a big fine for the cancellation.

“We had a bad situation. Sajad came to Tehran for his training [but] we had a financial problem, the sponsor didn’t keep their word. In short, Sajad trained with me for only two weeks and I told him he was not ready to fight. But I had to be with him because he had to fight and somebody had to coach him.

“His opponent was the same level as Sajad but Sajad couldn’t do much, I am so sorry. I tried to help him but we had a really short time for it. I hope we can fix it in the future.”

Hulk was previously disowned by his mother after Ford pushed him over during a face-off before the fight was discarded altogether. He will probably face the heat of his countrymen and women after another embarrassing encounter.