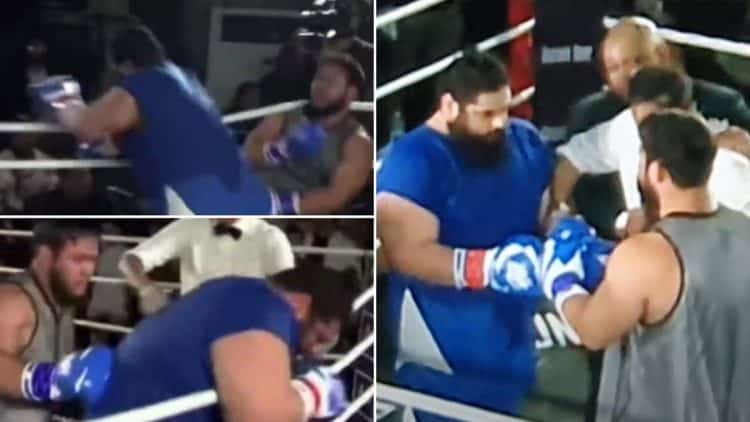 After many years of anticipation, Sajad Gharibi, better known as the Iranian Hulk, finally entered the boxing ring for his first official fight. His fight against Djumanov Almat Bakhytovich, better known as Kazakh Titan, took place on July 31, 2022, at the P7 Arena in Dubai. Despite the fact that no one really expected great things from this fight, it was nonetheless a very disappointing sporting spectacle, but Kazakh Titan emerged victorious.

From the start, it was obvious there was something wrong, as neither man dared to remove their shirts. Several rumors have already been stoked about the photoshopped images of Iranian Hulks, leading Sajad to express his reluctance to disclose his actual physique.

The fight was supposed to consist of multiple rounds with each of them lasting two minutes. However, the Iranian Hulk failed to advance to the second round. It appeared that he had no understanding of boxing as his punches and movements were very unnatural. Aside from that, Iranian Hulk was unprepared to accept any punches, so each hit from Kazakh Titan stunned him for a brief moment. Within half a minute or so, Iranian Hulk began turning his back on Kazakh Titan and attempting to walk away from him.

The Iranian Hulk got a timeout after he got shaken up in the first round. However, that did not help him much, as Kazakh Titan dropped him shortly after returning to action. After less than one full round of fighting, Kazakh Titan was declared the winner.

Iranian hulk comes out like a champ! With Muharram tunes! Ya Hossein! pic.twitter.com/qODHEjLvYX

Related: Iranian Hulk And Kazakh Titan Get into Physical Altercation During Their Heated Face-Off

A quick glance at Twitter shows how bad Iranian Hulk really performed. Here is what some users commented:

“Iranian hulk is the most embarrassing person I’ve ever seen in my life. Thank god he didn’t fight martyn ford I legit think he would of died.”

“Someone needs to stop this joke before he gets hurt. Photoshop isn’t real life.”

A few months ago, Iranian Hulk came close to fighting Martyn Ford, but it did not come to fruition for several reasons. Firstly, Martyn and his team were not satisfied with Iranian Hulk’s real physique, as they expected the man from his Instagram posts. Also, after Ford and Hulk got into a physical altercation during their face-off, Sajad went home and released some questionable statements. The Iranian Hulk explained that his family disowned him and that he had suicidal thoughts. Martyn Ford then canceled the fight because of concerns about Hulk’s mental health.