Discover the training and diet that has made Larissa Reis one of the hottest, most in-demand IFBB pro athletes and fitness models on the planet. 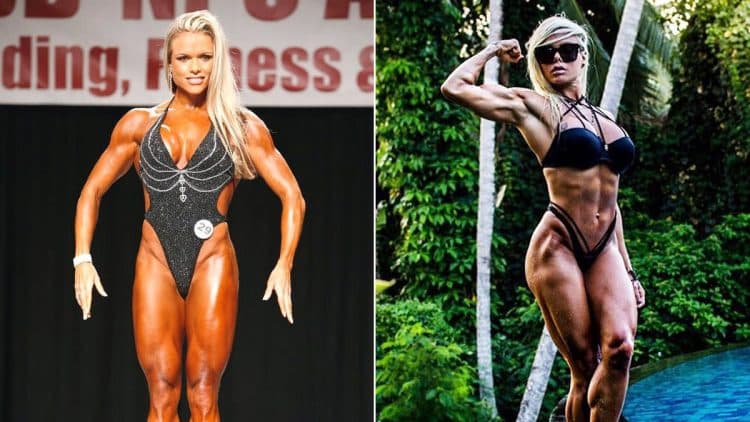 Larissa Reis is a former IFBB Pro bodybuilder and an icon in the fitness industry. Her combination of a smoking hot body and a beautiful face makes it hard to take your eyes off her. Reis has inspired countless women to weight train.

In this article, we’ll break down Larissa’s training and diet to show you how the Brazilian IFBB pro maintains her world-class physique.

Larissa Reis was born and raised in the Brazilian capital of Brasilia on May 21, 1979. It was clear early on that she had great genetics and could pursue a career in fitness and athletics. A fast metabolism made it easy for her to stay lean, even when she wasn’t eating particularly healthily.

In 2017, Larissa spoke about the opportunities that opened to her as a result of her time with Playboy Brazil:

“When combined with my natural athleticism, the fitness lifestyle opened up an amazing door of opportunity for me; the chance to enter into the very prestigious world of Playboy as a featured playmate.

Being a playmate opened up additional doors and my following opportunity, a marketing campaign for a health food supplement store, exposed me to the world of female figure competition. From that moment, my career path began to crystallize.”

Larissa moved to the USA in 2003 to pursue her dream. She threw herself into training as she set her sights on her first physique competition. Her hard work and dedication paid off, and she was awarded first place at the 2005 South American Championship.

Larissa’s next goal was to win her IFBB pro card. Following her victory, she took a year off from competition to build and fine-tune her physique for the 2006 Brazilian Champs. Again she walked away with the first prize trophy.

The following year, Larissa won her IFBB pro card when she placed second in the IFBB World Championships in Barcelona. Her first contest as a pro athlete was the 2008 New York Pro, where she finished 10th.

Over the next two years, Larissa entered five shows. That mammoth effort garnered her a first place (at the 2009 Atlantic City Pro) and a second. That second was at the New York Pro, an improvement of eight placings from the previous year.

Over the next few years, Larissa did not place in the top four in any show. During that time, however, her combination of natural beauty and desirable body made her one of the most sought-after fitness personalities on the planet.

In 2012, Larissa became the co-founder of a restaurant called Protein House. The restaurant was created with the concept of preparing food with the professional athlete or fitness-minded person as the customer. The business has become very successful, with several locations throughout the United States and the United Arab Emirates.

Larissa is very strict about how she fuels her body. Even though she does allow herself the occasional treat (usually straight after a competition or photo shoot), she views food as a key tool in perfecting her physique.

Larissa spaces her meals about three hours apart. As a result, she usually consumes between five and six meals each day. That does not include her pre and post-workout nutrition. She stays away from salty and sugary foods and believes that if you take the time to make delicious healthy meals, there is no need to eat foods that add no nutritional value to your body.

In terms of macronutrients, Larissa’s diet can be considered high-protein, moderate-carbohydrate, and low-fat. She is big on complex carbs such as asparagus, green beans, and broccoli. Her favorite protein choices are tilapia, chicken breast, and lean turkey. Her healthy fats come mainly from fish oil, walnuts, and almonds.

Larissa drinks around half a gallon of water every day. She also consumes tea and coffee.

Here is what a typical day of eating looks like for Larissa:

Larissa is a very active person beyond the gym. She currently holds a brown belt in Brazilian Jiu-Jitsu and loves to surf. In the gym, she’s totally focused on the body part being trained. Loud music helps her to stay in the zone.

Larissa trains on a six-day per week split routine and takes one day off the gym. She likes to keep her rep ranges relatively high in the 12-15 range.

Every morning Larissa performs 45 minutes of cardio. She switches between running on a treadmill, using an elliptical, and using a rowing machine.

“Always remember to follow your heart, work hard, surround yourself with good people, and stay positive. If you incorporate these basic principles into your life, you will find that nothing is impossible and that your dreams can become your reality.”

Given below is Reis’ training program:

Larissa trains extremely hard in the gym. To power those workouts and obtain nutrients for recovery, she relies on the following types of supplements:

Larissa Reis is a fitness icon who has made it to the top through decades of hard work and discipline. In this article, we have shone a spotlight on Larissa’s mindset, training, nutrition, and supplement regimen.

Ladies, have you got what it takes to follow in Larissa’s footsteps? You won’t know until you give it your best shot. Use our insights into Larissa’s methods and let us know how it went. Best of luck!