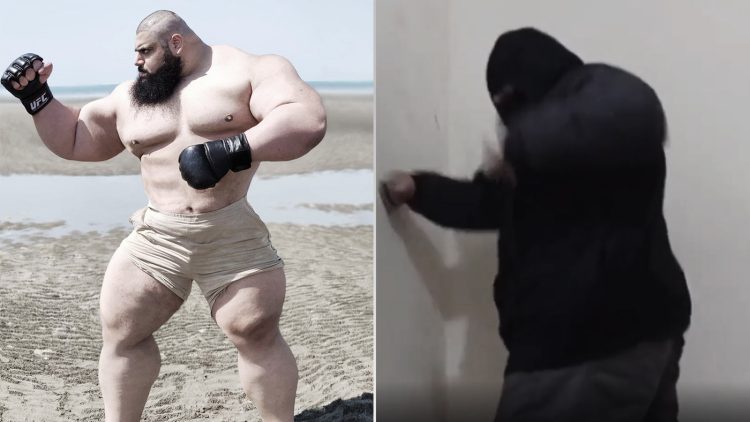 Recently, crossover boxing matches have created a niche in the sports entertainment industry. Fights like Hafthor Bjornsson vs Eddie Hall have caught fans’ attention in spite of the criticism hurled at them over the perceived lack of competitive relevance in the sport. In another such instance, Iranian bodybuilder Sajad Gharibi, popularly known as the Iranian Hulk is set to fight Martyn Ford AKA ‘Scariest Man on the Planet’ in April 2022.

In a recent video uploaded on Sajad Gharibi’s Instagram account, he is seen training full throttle, albeit a little differently. The training montage shows the Iranian Hulk training weights along with some unusual feats of strength. These include crushing a watermelon, bending a metal object, dragging a vehicle, breaking concrete blocks with punches, and practicing punching a concrete wall! The caption suggests that Gharibi posted the video to play mind games with Martyn Ford ahead of their fight.

‘beautiful white teeth one side you with all your sponsors front of me with dear fans all around the world who support and motivate me. different conditions it’s not important. even if the worst conditions i have but iranian hulk never stops see you april 2nd @martynfordofficial’ Sajad Gharibi wrote in the caption to his post.

Given the unusual attributes of these men, the training methods should not come as a surprise to anyone. The efficacy of these methods to enhance the performance is absolutely questionable. However, they do work well to create hype around the fight.

Sajad Gharibi has employed some unusual methods in training. However, Martyn Ford has taken an approach that is diagonally opposite to his opponent’s. In a recent video shared on his Instagram account, Ford looks ripped and intent on winning the fight on technique and movement rather than engaging in a head-on collision.

In the caption to his post, Ford revealed that he has shifted his focus from weight training to movement. The Scariest Man on the Planet is also losing weight, presumably to get the speed advantage over the Iranian Hulk. Ford also revealed that he is down to 22.5 stone (143kg) from his previous bodyweight of 23.7 stone (150kg). Furthermore, he promised to knock Gharibi out by ‘taking his jaw clean off‘.

“Down from 23.7stone to 22.5st …… I have switched up all of my training, from lifting ➡️ Movement.. NO more static lifts, NO more hypertrophy, NO more TUT …. what people forget, is that before moving weights I was an extremely fit athlete …. I promise you, in 5 months time …. April 2nd, o2 arena … I will be taking his jaw clean off. There really is no competition here, I don’t expect any thing else but a clean TKO … and then the most incredible after party London has seen. I can NOT wait to see all of you there !!!!!!” Martyn Ford wrote in the caption.

Sajad Gharibi and Martyn Ford will fight on April 2, 2022. The fight will take place in the O2 Arena in London, United Kingdom. Who do you see winning this fight and how? Let us know in the comments!