Life and accomplishments of Martyn Ford 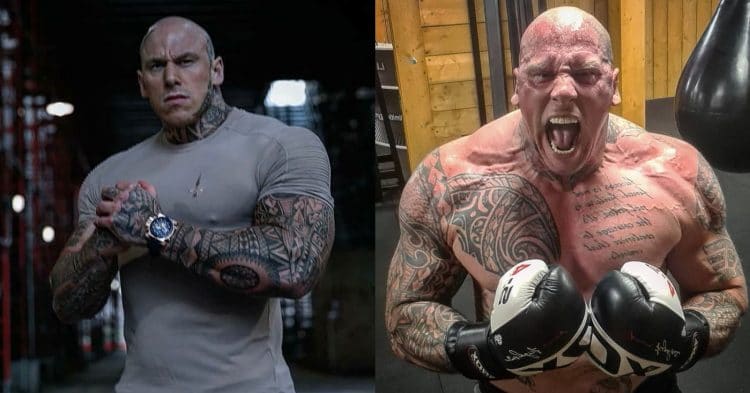 Martyn Ford is a bodybuilder, actor, and model from the UK. He’s most known for being intimidating in appearance, standing at a height of 6’8″ and weighing 300+ lbs. His nickname is “The Nightmare”. This is his complete profile, biography, training regime, diet plan, and more.

Martyn Ford was born in Staffordshire, England to parents Lorraine and Stephen.

He was very athletic as a child and involved in sporting activities such as cricket of which he excelled and hoped to make it his career. Unfortunately, young Martyn incurred injuries that made him lose interest and passion in the sport, and manytimes, it’s hard to compete at a high level after such an experience.

To make matters worse, he developed glandular fever; infectious mononucleosis and could not participate in strenuous activities for a year which put a damper on his athletic progression.

Consequently, his life took a different path which led him to focus on developing his physique. And like many, he found a new love in bodybuilding where he began to receive lots of attention due to his commanding stature and his overall intimidating appearance.

Ford is big on using various techniques to achieve the desired results. He also changes up his training depending on his endeavors or work opportunities.

Before a chest workout, Ford will do some high pulls and standing chest flys using bands to warm-up his muscles for a heavy training session.

“It’s really important to make sure your muscles have enough blood in them to allow you to do the exercises without causing injury. So make sure you don’t jump straight from exercise to exercise, make sure the body and mind is ready for what’s coming.”

He prefers to do his reps nice and slow for the first few sets to maximize time under tension and, then for the last set he’ll do a quicker tempo and do a drop set.

“The key to hypertrophy (muscle growth) is keeping the focus and keeping the tension on the desired muscle.”

“You’ve got to make sure every workout has a purpose, has a plan and you execute correctly.”

On heavy leg days, Ford likes to do a few isolation exercises before the compound lifts to warm-up his body and mind. He follows up with a few warm-up sets on the compound movement and then the third and fourth set is where he goes all, doing slow negatives and explosive positives.

He’s not an ego lifter either, especially when the goal is to pack on size.

“Moving big weights is really important, but from past experience, it’s only important to move the weights that your body is capable of.”

Ford will also introduce slow negatives on certain exercises and explained that taking a muscle where it doesn’t want to go is how you get stronger and progress.

Martyn Ford and 2017 World’s Strongest Man Eddie Hall met up to do the following workout routine back in 2019.

Martyn Ford and fitness model Simeon Panda performed the following workout together in 2018.

“Find a form of fitness that excites you, that gives you energy, and gives you that drive to want to be better.”

Martyn Ford has to eat more than the average human to maintain his size. He’s even said before that he consumes up to 8,000 calories although we’re not sure how many calories he needs currently to maintain his hulking physique.

His protein sources include eggs, chicken, turkey, fish, and steak and for carbs, he eats a lot of rice, sweet potatoes, and oats.

Pre, intra, and post-workout are also a part of his nutritional regime especially since he’s very active whether he’s training for muscle mass or to MMA.

Ford used his unique size and look to break into the movie industry and so far he’s had great success. In 2016, he was cast in the film Undisputed IV- Boyka as Koshmar The Nightmare.

In 2020, Ford announced that he landed a role in the Fast and Furious 9 movie. The film was scheduled for release in 2019 but was postponed due to other films and then again because of the global health crisis.

Martyn Ford took an interest in MMA (mixed martial arts) later on in life but seeing as how well-known he’s become, it’s not surprising that he was signed to KSW in 2018.

Martyn Ford got married in 2019 to Sacha Stacey, of which Eddie Hall was his best man at the wedding. The couple has two daughters.

The Nightmare was also good friends with the late Rich Piana and attended his wedding and he also took over as the face of the 5% Nutrition brand in 2018 following Piana’s death.

Ford has amassed quite a big following on social media with over 3 million followers on Instagram.

In 2018, Ford suffered from a stomach ailment that landed him in the hospital and required him to get surgery. But he’s obviously made a nice recovery and has continued to achieve great success.

Martyn Ford has made quite the name for himself. His appearance and persona has allowed him to achieve much success and he’s only just getting started.

From a promising cricket player to a bodybuilder, model, actor, and MMA fighter, The Nightmare is determined to get the most out of this life that he possibly can.

He’s an inspiration to many and we’re looking forward to seeing how things unfold for him in the future.