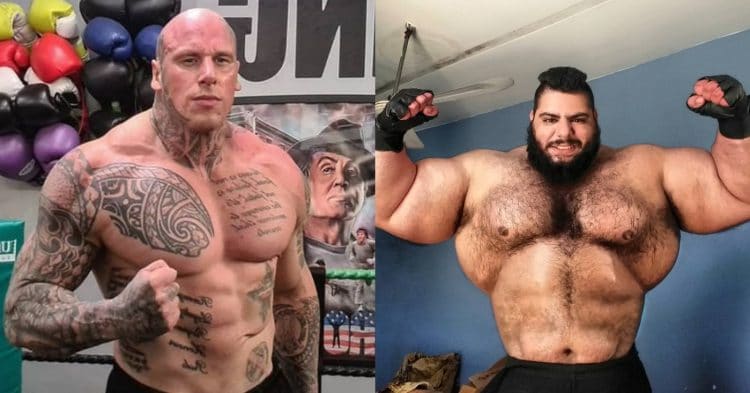 The fight between Martyn Ford and the “Iranian Hulk,” Sajad Gharibi has been talked about for years. Now it appears that it is finally going to happen in the boxing ring.

Ford has been training in MMA, Brazilian Jiu-Jitsu, and boxing for many years now. As for Gharibi, he is a self proclaimed MMA fighter who has not actually fought, but has accepted fights against the likes of the UFC’s Brian Ortega, as well as the entire terrorist organization ISIS.

After years of being rumored, it seems that these two massive genetic freaks will finally be going head to head in combat, although not in MMA as originally expected. Martyn took to his Instagram to reveal that Sajad had signed the papers to face him in a boxing fight that Martyn is taking very personally, with a date set for April 2nd, under the banner of celebrity boxing promotion BoxStar.

“So …… apparently @sajadgharibiofficial managed to find some crayons and has signed the paper work …. its ON …. many people have asked me WHY … all I will say on this platform is its PERSONAL ….

from him and his people, words have been said that can’t be unspoken … and when you see you will understand exactly why I’m doing this … every man, who is a father will understand. This maybe a boxing match, but believe me I’m happy to get disqualified to put my point across,” Ford wrote.

The History of Martyn Ford vs Sajad Gharibi

As previously stated, this is not the first time that Martyn Ford and Sajad Gharibi have been booked to fight each other. In fact there have been rumors of the two being booked to fight in MMA, as far back as 2018.

It was previously revealed that both men had signed contracts to fight in Polish MMA promotion KSW in 2019, but that fight went nowhere, with no real explanation as to why it got canceled. Sajad had also signed a contract to fight in a bare knuckle boxing match at one point, but again that never materialized.

The fact that there is a date attached to the matchup this time seems to lend itself to the idea that this fight between Martyn Ford and Sajad Gharibi might actually happen this time around. With both men weighing well over 300lb, this could be the only boxing match that rivals Hafthor Bjornsson vs Eddie Hall as the heaviest fight to ever happen.

Goblet Squat vs. Sumo Squat – Which One is Best?