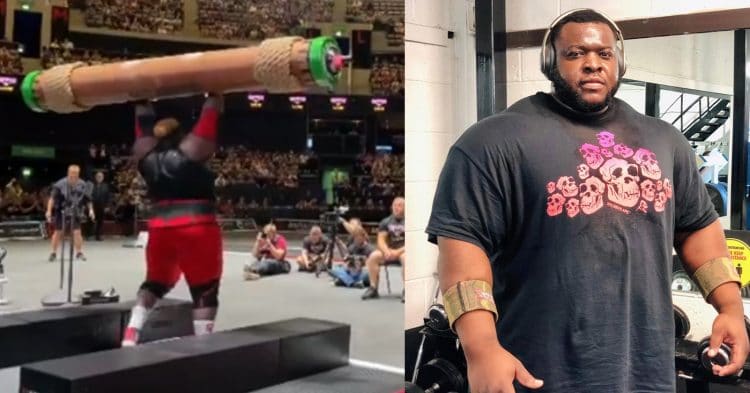 Records are meant to be broken and this was certainly the case when Cheick “Iron Biby” Sanou crushed it with a 229kg/504.8 lbs log lift at the Giants Live World Tour Finals on Saturday, September 18, 2021. His massive overhead press eclipsed the longstanding log lift record (228kg) previously held by Strongman legend Zydrunas “Big Z” Savickas.

Big Z was the man to beat ever since he set the bar back in 2015 and if anyone was going to do it, we all knew Iron Biby was capable. The West African Strongman smashed the record at SSE Hydro Arena in Glasgow, Scotland and 2017 World’s Strongest Man Eddie Hall shared the amazing performance on his Instagram.

Iron Biby was scheduled to compete in the World Log Lift Championships at Europe’s Strongest Man (ESM) earlier this month but could not due to a family death. Luke Stoltman, who won ESM, broke the British log lift record in October 2020, and Biby’s nemesis Graham Hicks also competed in the 2021 ESM. However, neither would come close to what Biby achieved, both tying for first in the event with a 195 kg/396.8 lbs log lift.

The elite presser showed off a little with a 200kg log lift in training following the contest, a preview of what was to come.

The 229kg log lift is no easy feat for anyone (hence why Big Z’s record held for so long) and while Iron Biby showed a little struggle fighting to manage that much weight, he got it up rather quickly and impressively.

Unofficial Record, Other Records, and Competition

Not to mention, Iron Biby earned himself a spot in the Guinness Book of World Records for most overhead presses (of a person) in one minute.

This begs the question, will arguably the greatest Strength athlete in history attempt to reclaim the world record he set back in 2015, and that held up until it didn’t anymore on September 18, 2021?

As of right now, we’re now sure what the 46-year-old legend plans to do and we’ll update accordingly. But we think Iron Biby deserves tons of praise for his incredible accomplishment and we’re curious if he’ll improve upon his record sometime in the near future.