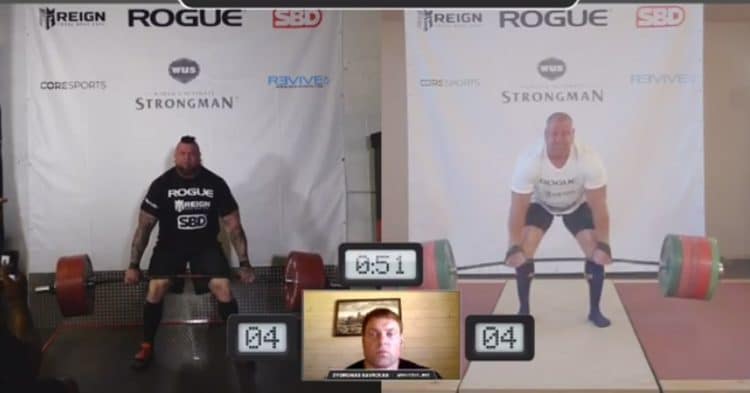 Today already saw the 800lb raw bench press attempt by Julius Maddox of which he was unsuccessful following an unfortunate mishap that was out of his control.

But on the other end was the 400kg/880lb deadlift for reps record event featuring Rauno Heinla from Estonia and Jerry Pritchett from the United States. These two behemoths are well-known for their deadlift performances and today would determine the better man in this particular event.

Heinla won the 2019 World’s Ultimate deadlift title by crushing 450kg/992lbs although he has achieved 1,003lbs/455kg in this lift before. Pritchett, on the other hand, achieved a 465kg/1023lb deadlift at the 2016 Giants Live event. In addition, he set the American deadlift record of 1,031lbs/467.5kg which he did with an Elephant bar and it was the world record using this bar at the time.

So for this event, the athletes had 75 seconds to complete as many reps as possible. But interestingly, both were done in under 30 seconds as they both reached their limits, allowing several seconds to go by without another rep in either of their tanks.

Now, for those unaware, this was a remote event which meant that both men performed in separate locations with a 10-hour timezone difference. Heinla performed the lift in the evening, his time (6:30 P.M.) while Pritchett’s was in the morning (8:30 a.m.).

Whether this would have made a difference for either athlete is uncertain. However, a 1-rep difference would indicate no real advantage for either. Laurence Shahlaei predicted 6 reps so apparently he didn’t think there’d be either.

So to start things off, both athletes did a few progressive warmup sets before they handled the big weight. Strongman legend Zydrunas Zavickas was the head ref for this showdown and he verified the weight before the competitors could go ahead with their attempts.

Watch the head-to-head below which starts at around the 48:30 mark. Pritchett was on the left and Heinla on the right.

Here’s the Instagram clip of the head-to-head as well.

All-in-all, it was a great effort for both men. It ultimately came down to a single repetition but 400kg is no light weight to be lifting for anyone including two Strongman elites.