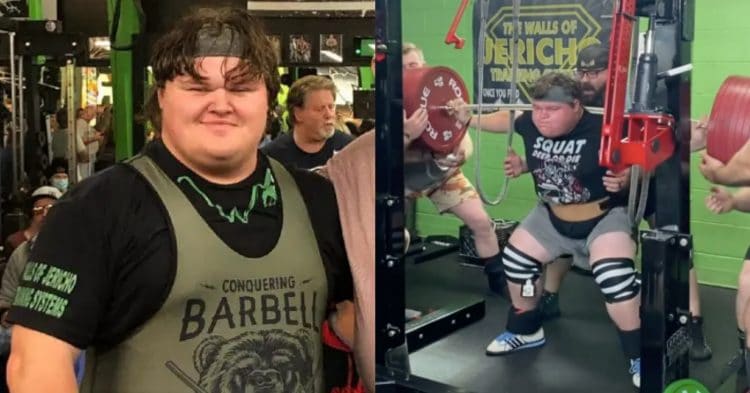 It has been a bit since we’ve covered one of powerlifting’s most exciting young prospects in Jackson Powell. He showed recently that in that time, he has put together some massive gains.

For those not in the know, Powell is one of the most skilled teenage powerlifters in the world right now. The world record holder is just 18 years old, but he has already put together some performances that grown men could not even dream of.

When we spoke to him last year, Jackson said that he had his sights on being the first teenager to hit a 1,000kg total. He took a massive leap in the right direction to reach that goal, at his last meet in December, totaling a shocking 927.5kg (2044.8lb).

Over the last few months, Jackson Powell has been gearing up for another contest, and has been looking to keep adding weight to his already incredible total. It seems like things are working out that way too, after his most recent update.

Posting to Instagram, the powerlifting prodigy shared a clip from a recent training session. Here he can be seen hitting a jaw dropping 419.5kg (925lb), doing so for two reps.

“what do I say other than what a freaking morning. Had a lot of the team there and pulled something amazing. Huge thanks to everyone who came out and I’m pumped for May. 925 for a double at 18 years old. Big things coming,” Powell wrote.

There are a lot of reasons why this is an impressive lift. For starters, it is just a massive squat double, especially when you consider how old this young man is.

On top of that, Powell surpassed his competition best squat by almost 25lb with this training session, and did it for a double. It is worth noting that he did not reveal his bodyweight for this performance, so it is unclear how much heavier he is than in December, but regardless it is insane to see.

He has been making gains all around too, as Jackson has made improvements in his bench numbers as well. That was evident by his previous update, where he pressed 190.5kg (420lb) for a solid triple.

Ultimately time will tell if Jackson Powell can be successful in his goal of being the first teenage to total 1000kg. However there is one thing that is certain, and it is that he will give it his all to try.