Jamal Browner’s new deadlift is the third-heaviest in the history of powerlifting across all weight classes. 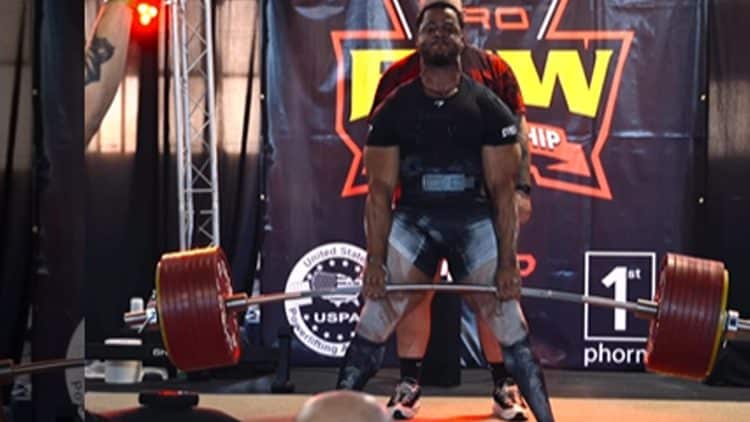 In addition to the outstanding performances coming from John Haack, Samantha Rice, and Joe Sullivan, the 2022 USPA Pro Raw also featured an appearance from Jamal Browner. Seeing that he has not been competing since the start of the year, it was clear that Jamal would display a whole new level of strength on September 24th, in North Kansas City, MO. In spite of this, no one predicted that he would be in such phenomenal shape. The results were beyond his expectations, so he easily exceeded them.

Jamal Browner weighed in at 109.4 kilograms (241.2 pounds) and took part in the 110-kilogram weight class. In addition, he ended up setting two new All-Time Raw World Records in this weight class.

Jamal Browner first broke the record on the deadlifts, having locked out 455 kilograms (1,003 pounds). This shattered the previous record of 440.5 kilograms (971.1 pounds), which Jamal set at the 2020 WRPF Hybrid Showdown II. To break this record, Jamal utilized a sumo stance and a hook grip.

*All of these lifts are Jamal Browner’s new competition PRs.

Jamal Browner’s new deadlift is now also the third-heaviest ever performed in the raw division, regardless of weight class. So, only Dan Grigsby (U125KG) and Benedikt Magnússon (+140KG) lifted more. In addition, for his final attempt, Jamal attempted to deadlift 467.5 kilograms (1,030.8 pounds), but he was not able to fully lock it out despite the promising start.

Jamal Browner has been competing for the past six years and he had 15 appearances prior to the 2022 USPA Pro Raw. In addition, he managed to win ten out of those 15. He has obviously achieved a lot, but it seems that this is the pinnacle of his career.

Now that he has reached the 1,000-pound milestone, what happens next for Jamal Browner will be interesting to see. If he achieved half a ton in the near future, he would be considered one of the greatest of all time.