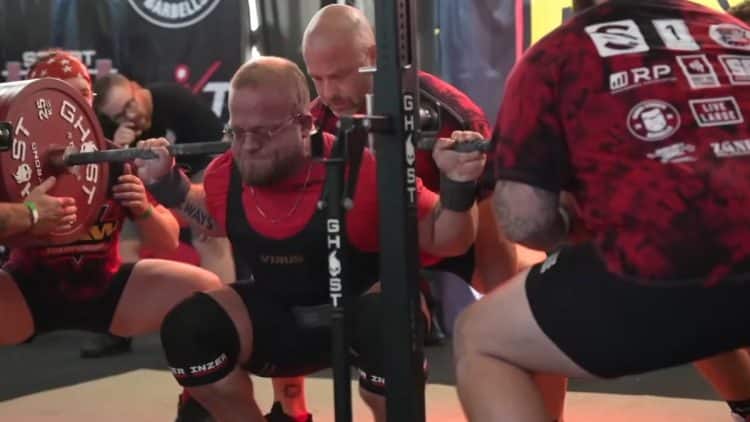 2022 USPA Pro Raw finally began after several months of anticipation. Judging by the roster of competitors prior to the competition, it is easily the biggest powerlifting event of the year. It gathered the likes of Jamal Browner, John Haack, Samantha Rice, and many more. Joe Sullivan, however, set the record in the men’s division with a stunning performance.

Joe Sullivan is one of the greatest pound-for-pound squatters in modern powerlifting, which he proved once again at the 2022 USPA Pro Raw. His first attempt immediately hinted towards a new world record, since he demolished 365 kilograms (804.8 pounds) and made it look like a warm-up.

Joe Sullivan added another 16 kilograms (35.3 pounds) for his second attempt, which was heavier than the old All-Time Raw Squat in the 100-kilogram weight class. Joe also held that previous record of 380 kilograms (837.7 pounds), which he set at the 2021 WRPF Bucked Up Showdown in Kansas City, MO, on Sept 25, 2021.

Despite breaking the record already, Joe Sullivan decided to go even heavier for his final attempt. It came out to 384 kilograms (848 pounds), which significantly improved the record even further.

Check out the lifts here:

Joe Sullivan talked about his new World Record in an interview straight after his lift. In addition, he explained why he took a long break from competing, which he attributed to nerve damage. This made it difficult for him to engage his lat, which is one of the main muscles for all three lifts.

Joe Sullivan also explained that he felt very comfortable in all three squat attempts. In the future, he can be expected to accomplish a great deal. All of his lifts will benefit significantly if he gets back to competing regularly.

Prior to the 2022 USPA Pro Raw, Joe Sullivan competed in 23 sanctioned powerlifting competitions. Aside from the USPA Pro Raw, he won 15 other competitions, including the 2021 Bucked Up Showdown and many more. The full official results for his performance at the USPA Pro Raw are not currently available, but it seems that he has improved some competition PRs.

At this USPA Pro Raw, Joe Sullivan’s world record squat appears to be among many records that will fall. However, not many will be more notable than Sullivan’s, as he is inching closer to becoming the first person under 100 kilograms (220 pounds) in bodyweight to squat 400 kilograms (881.8 pounds) raw. Things seem to be going in the right direction, so it’s only a matter of time before it happens.