Jamal Browner's deadlift is on par with some of the greatest Strongman athletes. 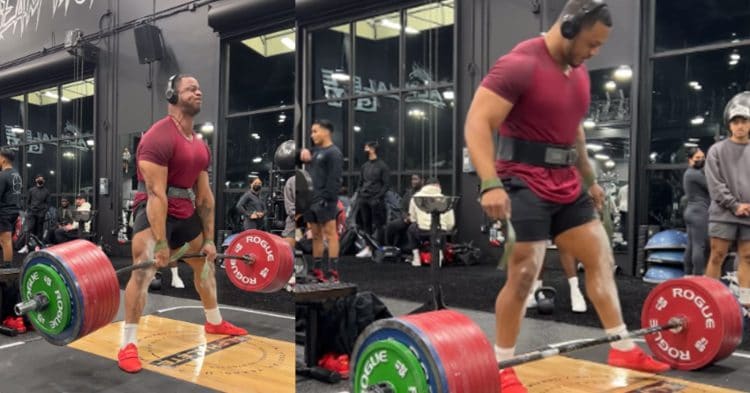 One of the strongest deadlifters ever, Jamal Browner, is pushing the limits, and coming closer to a half a ton pull. Just a few days after The Hybrid Showdown 4, he published a massive 483 kg (1065 lb) deadlift on his official Instagram page. Jamal hasn’t specified if this is his PR, but as far as we know, he seems to have never pulled more weight.

Jamal’s deadlift was done with a sumo stance. He only used a lifting belt and a pair of wrist wraps. Jamal planted his feet, took the slack out of the bar, and pulled it up quickly.

Jamal did not reveal his bodyweight, but he competed in the 110 kg category just a few days ago. Only a few people have deadlifted more than Jamal. Most notably, Hafthor Björnsson, as he is the current deadlift world record holder of 501 kg (1104.5 lbs), his deadlifting stance was conventional, as sumo is not allowed in strongman. Hafthor weighed more than 400 lbs (181 kg) and set the record at his home gym due to Covid-19 restrictions back in 2020, and the lift was regulated by World’s Ultimate Strongman.

Hafthor broke the record of Eddie Hall, the only other man to pull half a ton. Eddie set the old deadlift world record of 500 kg (1102.3 lbs) at the 2016 Giants Live Deadlift World Championships.

Two other strongmen came close to Hafthor’s Record. Peiman Maheripour managed to lift 492 kg in training, while Ivan Makarov lifted just 2 kg less than him, that is a 490 kg deadlift.

Jamal’s deadlift surprised many people, including some of the greatest athletes across different sports.

Rob Kearney – a multiple-time WSM competitor, known for his impressive static strength. Rob excelled at the deadlift event, so a comment from him is very meaningful.

Laurence “Big Loz” Shahlaei – also a multiple-time WSM competitor, and one of the greatest Strongman athletes ever.

Danial Zamani – one of the greatest bench press lifters in the world, and the only rival to Julius Maddox, recognized the greatness of the lift.

Some other comments were:

Jamal competes in the 110 kg category and holds two world records. These are his official (done in competition) personal records.

Jamal’s recent outing at the Hybrid Showdown 4, held on January 15-16, 2022 At HYBRID Performance Method Gym Miami, FL, saw him underperform in every lift. He did attempt to break his own deadlift world record two times with a lift of 442.5 kg (975.5 lbs). Both times were unsuccessful, and it seems his grip strength was the problem.

Jamal is a deadlift specialist and has lifted some serious weight before. His previous recorded PR on deadlifts was 476.3 kg (1050 lbs). The lift was done in his home gym, back in April of 2021.

Jamal Browner is now extremely close to the infamous 501 kg (1104.5 lbs) record, and judging by the speed of his deadlift, setting the new world record seems very possible. In addition, if Jamal can improve his grip strength, the raw world record could be significantly improved.