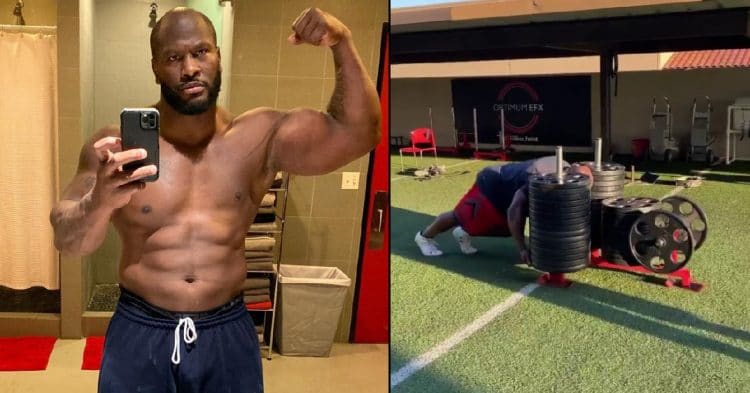 As a defensive lineback for 15 seasons, James Harrison showed an exceptional amount of strength. Even at age 42, he showed us recently that he is still a ridiculously powerful force.

James is currently enjoying his second retirement from the NFL. Initially he retired in 2014, after playing for the Pittsburgh Steelers for many years, even earning some Super Bowl wins along the way. However he would come back just a few weeks later, playing until he finally retired for good in 2018.

Despite the fact that he is not competing anymore, James Harrison is still in tremendous shape. He proved this big time, for his 42 birthday, by pushing a massive 1,970lb sled. A video he posted to Instagram sees him celebrating his birthday by counting all 42 plates. He then proceeds to buckle down, and push the sled a whopping ten yards.

Take a look at the epic performance:

These types of birthday challenges are always fun. At first, James is worried about being able to push the sled from the handles. However, after getting some advice from his coach, and reaching from the bottom, he pushes the sled. It is insane to see this type of strength at his age, and just goes to prove how special of an athlete he is.

Although it is not that surprising, when you consider the fact that Harrison is never far from the gym. Here he is, doing some arm raises with chains recently. You can see that he is still in tremendous shape, and is still a mountain of a man.

Even at 42 years of age, James Harrison continues to be a physical specimen on the field. Happy birthday to this football legend, and we hope to keep seeing him doing crazy things like this on a regular basis.