From powerhouse 'Big Ramy' to dark horses like Akim Williams, Cormier, Wilkins, and Olympia judge Terrick El Guindy give each competitor a team 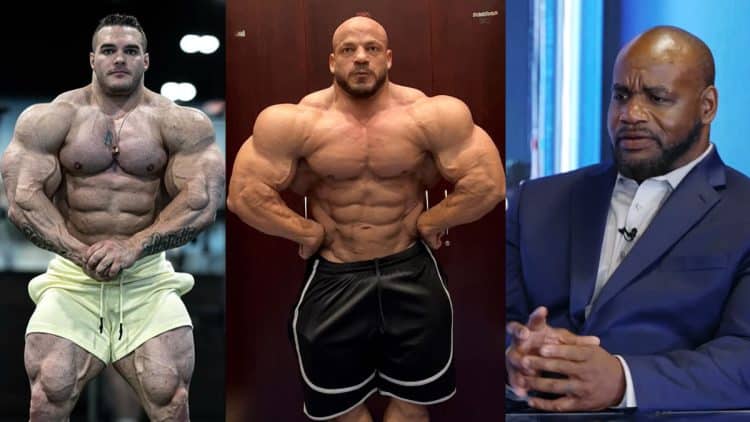 2022 Olympia’s Men’s Open division boasts some of the freakiest mass monsters in the world. From reigning two-time champion Mamdouh ‘Big Ramy’ Elssbiay to upcoming prospect Blessing Awodibu, there is a plethora of talent in the category. In a recent video uploaded on Muscle and Fitness’ YouTube channel, Chris Cormier, Tim Wilkins, and Terrick El Guindy compare the Open competitors to NFL teams.

This year’s season is turning out to be one of the most exciting and competitive. The competition is so intense that many people believe no one’s placing from last year is safe. Bodybuilding legend Jay Cutler gave his take on the lineup about two weeks ago. According to the four-time Sandow trophy winner, it would be extremely difficult to pick a winner for the 2022 Olympia as the top ten is very competitive. ‘Big Ramy’ will enter the contest as a favorite to defend his throne. However, Cutler believes it’s hard to count out 2019 Mr. Olympia Brandon Curry.

‘Big Ramy’ and Nick Walker recently shared physique updates with crazy backs eight weeks out from the Olympia. Walker has talked about his ambitions to get as many Arnolds and Olympias as he can. ‘The Mutant’ looked in incredible shape as he showed off his shredded back. While ‘Big Ramy’ performed a back lat spread pose before flexing his muscles to highlight the details.

Following a successful start to the season, with wins at the 2022 Indy Pro as well as the 2022 New York Pro, Blessing Awodibu is ready to leave a mark at his maiden Olympia show. He shared an insane physique update, working on his back posing routine seven weeks out from the biggest event in bodybuilding.

They start by backing ‘Big Ramy’ as the powerhouse and argue Akim Williams is the dark horse.

Terrick El Guindy said, “You got Big Ramy, the massive teams, the powerhouse, Dallas Cowboys year after year but he’s doing something they are not doing anymore; he’s winning.”

Terrick El Guindy said, “We always have high expectations for Akim and Akim always says, ‘I like to play the dark horse. Akim has been the Dallas Cowboys. He doesn’t want to be in the spotlight. But there’s always huge expectations on him. He’s the Dallas Cowboys. He’s America’s team. Everybody loves him and wants him to do well. He can eventually be the Rams but right now he’s the Cowboys.”

Cormier said, “Expectations is always there for Akim because of his brute size. That quad on the side can rival Ramy and that side chest, and not many people can. Everyone’s expecting something out of him every year.”

The trio debated about second-generation bodybuilders who have a weight on their shoulders to carry on the legacy.

Tim Wilkins said, “If Lee Labrada was Archie Manning, that would definitely make Hunter Peyton Manning. You have great expectations for the legacy.”

Cormier, “Sergio, working with him in the past, I see a whole lotta Sergio Oliva Sr. in him. Those big arms, the back, the muscle insertions no one else has in the world.”

El Guindy believes Curry is one of the most consistent athletes in the sport, and like the Pittsburgh Steelers, he will be at the top for a while.

Cormier thinks Walker has gained a lot of momentum from the previous years and is expected to do big things at the 2022 Olympia.

Cormier said, “Now, all of a sudden, this year, people have big expectations for you. They didn’t before. Everyone wasn’t on board with Nick Walker before, they were talking a lot of s**t about his physique, his waist, his veins and whatever. But he’s putting together quite a team to make improvements and I think Cleveland Browns are making a lot of improvements.”

They discussed the inspiring story of Hadi Choopan making it to the podium after coming from Iran.

Tim said, “Hadi to me is the Notre Dame. He’s the people’s champion that everybody loves and wants to see win. On any given day, Notre Dame could be a some pro teams. So he’s the one everyone wants to get behind and see that underdog come back and take down the Goliath.”

El Guindy: “For a competitor from Iran, we have all the visa problems and everything; political differences. For him to come in and place third at the Olympia. All those fans on IG, on pay-per-view watching, giving him support, we have no idea what this guy has been able to do. He’s a symbol. He’s in the world cup scenario. He would be like when Spain won the World Cup for the first time after 100 years, that’s what Hadi represents for that country.”

William Bonac is one name they argued not to dismiss.

Tim said, “I got one that we forget about too often and it’s a team like the Minnesota Vikings. You forget that they are a hard fighting team that shows up year after year. Some years they are great, some years they aren’t. William Bonac, we talk about the top five and we forget regularly that there’s a ‘Conqueror’ out there who’s had an amazing run, who’s still looking to get back in the top two or three.“

El Guindy, “He would be the 49ers. They were a team people didn’t have a lot of expectations from but they were good and ended up in the NFC championship game. The thing about William Bonac is this, one of the Mr. Olympias which was his breakout, he placed third. There was an interview with Ronnie Coleman as he walked out the arena. The first thing Coleman said about Bonac is, he’s off the chains.

That was the beginning of the William Bonac journey. He just placed second at the Arnold and some people thought he could’ve beaten Brandon Curry. Whoever is forgetting Bonac for 2022 Olympia doesn’t really know the sport. This guy could be in the top three. He can be a threat. He has all the density and is packed with muscle. Don’t forget about Bonac.”

El Guindy praised Blessing for his brash personality and stated he was good for the sport.

Tim said, “Blessing Awodibu, Rams, newer team, on a couple of wins. Who knows how the season could end.”

El Guindy: “There’s a lot of talk about Blessing. Some people just dislike his personality and some people love him. I freaking love his personality. He’s out there, confident, and telling everybody he’s going to win the Mr. Olympia. We are missing that. We don’t need bodybuilders that are hiding themselves in the corner of a gym. We need guys with energy, confidence. He’s picking up fights in good fun. I’m a huge fan and I think he’s good for the sport.”

Last week, Bonac gave a look into his full day of eating during contest prep for the 2022 Mr. Olympia. He has been working hard in the gym and tipped the scales at a gigantic 264.6 pounds (120.3 kilograms) a month ago. His coach, Chad Nicholls, who also mentors Big Ramy is confident that Bonac will bring the best version of himself at the show.