Former pro-footballer James Harrison takes to the bench to do something only superheroes can do: 525lbs. 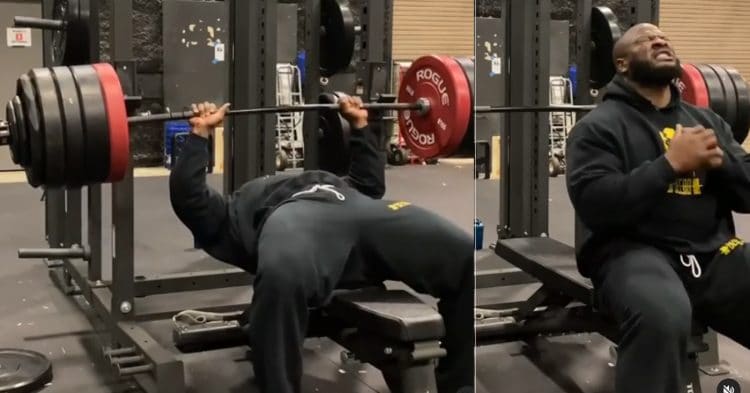 Superhuman is a word that is being used to describe the most recent 525lbs bench press of former Pittsburgh Steeler James Harrison. He may not be a professional powerlifter lifting more, but Harrison’s latest is a phenomenal undertaking.

The lift happened this week, and James Harrison put it on Instagram yesterday. It’s one of those lifts that you can’t keep your eyes off of and have to watch over and over again.

The word superhero comes to mind. Who else could do such a thing?

In the clip, he spends a few minutes with some music to get pumped up and inspired before he makes the lift. Then he crushes it, and the plates almost crush the bar.

Watch the video and you can see for yourself how the bars bend to Harrison’s massive feat.

During the video he is almost animalistic, as any human would be trying to lift a quarter of a ton. He screams at the weights “Get off me!” a few times, and you just can’t help but hold your breath.

The lift seemed to work for him because his next attempt was 545lbs. That one didn’t quite make lift-off, but watching him try is inspiring in itself.

James Harrison posted the lifts to Instagram, and his followers definitely appreciated it.

Harrison’s fans and followers appreciated the effort, and many were inspired by it. He got accolades from his followers with words like “perseverance!” and even some requests for tips.

One of his commenters said that watching this made him feel like he needed a new goal for the month, to hit the same amount. Others were asking him for tips on things like, how do I keep my wrists straight for that.

His choice of music was also commented on by many of his followers.

Overall, anyone viewing the superhuman accomplishment wouldn’t help but be inspired. He may not be hitting the numbers of the professional powerlifters, but his ability to pump iron is like young Arnold Schwarzenegger, a lifetime achievement in itself.

As a defensive lineback for 15 seasons, James Harrison showed an exceptional amount of strength. Even at age 42, he...